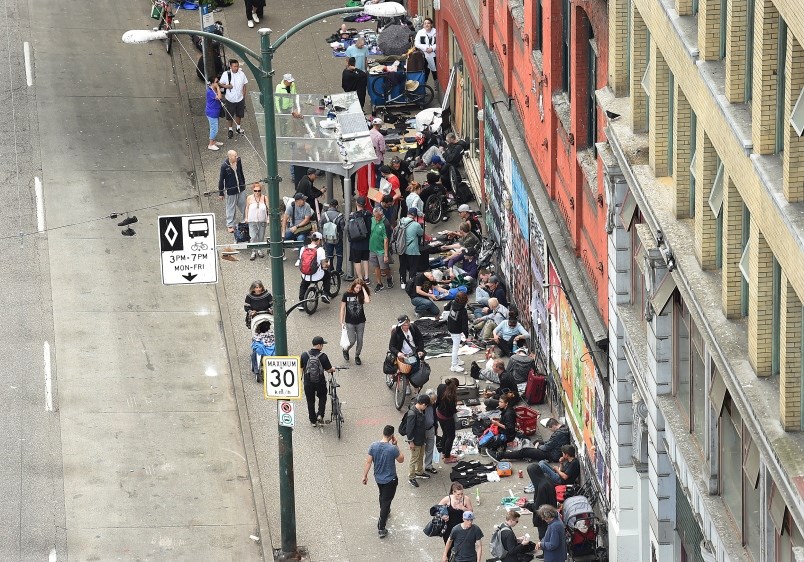 But Dr. Patricia Daly, the chief medical health officer for Vancouver Coastal Health, did provide a percentage of those infected with the disease in a presentation Tuesday to Vancouver city council.

Daly said residents in the neighbourhood are being tested at a rate of 40.8 per 1,000 people, which is more than three times the rate of the overall testing in B.C.

The most recent results in the Downtown Eastside showed 1.6 per cent of those tested were positive for COVID-19, she said, but didn’t disclose the number of tests.

“This doesn’t mean that 1.6 per cent of the community has COVID, as we’re only testing people with symptoms,” Daly told council by telephone in a dial-in meeting.

“So of the people in the Downtown Eastside with respiratory symptoms, only 1.6 per cent have had COVID-19. That translates to a very, very small number of cases.”

The health agency is not releasing the specific number of people infected with the disease to protect their privacy, Daly said.

"I've had requests to identify where these people live, where they are," she said.

"We don't want to do that because the numbers are so small it might violate their confidentiality, people might know who they are."

Vulnerable residents in the Downtown Eastside, many living in crowded single-room-occupancy hotels, have been a major focus of health officials during the pandemic.

The fear has been people sharing washrooms and kitchens, along with the large groups of people gathered on the sidewalks and in Oppenheimer Park, are more susceptible to contract COVID-19.

That fear has led to the health agency, the city, the provincial government and various non-profits deploying teams to help residents self-isolate, deliver meals and find temporary accommodation in hotels and community centres.

Combined with those efforts is the ongoing outreach to reduce the number of people in Vancouver overdosing from the toxic illegal drug supply.

Daly provided data that was viewable in the livestream of the council broadcast that showed a significant decrease in the number of people using overdose prevention sites.

That decrease, which dropped from an average of 6,000 visits per day to as low as 2,000, began occurring in mid-March when province-wide orders related to physical distancing began.

Daly said she was worried hotel owners and other housing providers in the Downtown Eastside have “overinterpreted” the health order to not gather in groups of 50 or more people and kept guests from visiting friends.

That interpretation, she said, may be connected to an increase in overdose deaths, where people are using drugs alone and dying in single-room-occupancy hotels and supportive housing buildings.

Data from the Vancouver Police Department of suspected overdose deaths this year supports Daly’s concern, with at least 30 overdoses in March occurring largely in single-room-occupancy hotels and supportive housing.

“I think people have overinterpreted the public health order of one-time gatherings of 50 people,” she said.

“It’s not meant to be 50 people in a [single-room-occupancy] hotel. We have daycares that have more than 50 kids. They should be allowed to continue to operate. Schools will be opening up at one point.”

Added Daly: “Those [orders] are for one-time only mass gatherings. The advice about social distancing is broad advice, but clearly you would not do that if it puts you at greater risk.”

The Oppenheimer Park encampment has been the focus of much of officials’ attention during the pandemic, with the provincial government announcing Saturday an ambitious plan to relocate 300 people into hotels and community centres.

Daly, however, suggested people in the park were at less risk of contracting COVID-19 than those in single-room-occupancy hotels, shelters and other living conditions.

“I know there’s concern about people camping in Oppenheimer and on the streets, but actually if you’re outdoors in a tent, that’s probably lower risk for transmission of COVID-19 than if you’re in a crowded shelter,” she said.

“So some of the things that the community has done themselves [by moving into the park] have been because they’re well aware that in congregate housing settings, there may be a risk for transmission.”

The Downtown Eastside and the rest of the city are part of the Vancouver Coastal Health region, which includes the North Shore, Richmond and parts of the Sunshine Coast.

As of Monday, 795 people had been infected with COVID-19 in the region. Dr. Daniel Kalla, head of the emergency department at St. Paul’s Hospital, told Glacier Media April 21 there were 35 COVID-19 patients in hospitals in the region, with 10 on ventilators. St. Paul's had seven of those patients, with four on ventilators.