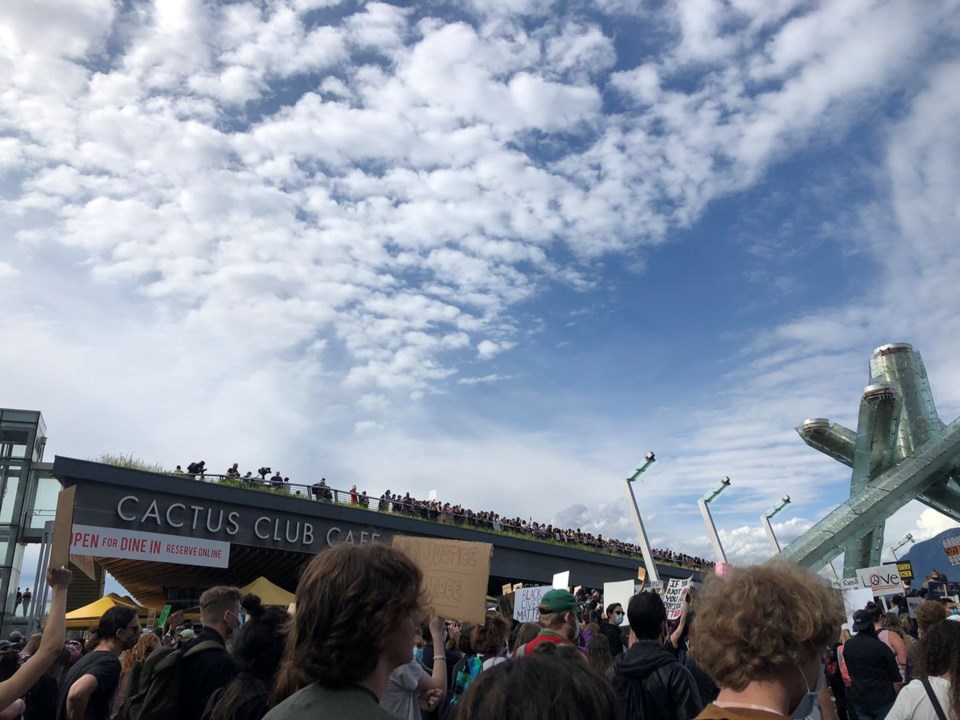 Crowds are gathered at Vancouver's Jack Poole Plaza on Friday afternoon to protest against racism. Photo by Elana Shepert.

After dancing and clapping to Tupac's song, "Changes," thousands of protestors took a knee and, once again, began chanting "Black lives matter." 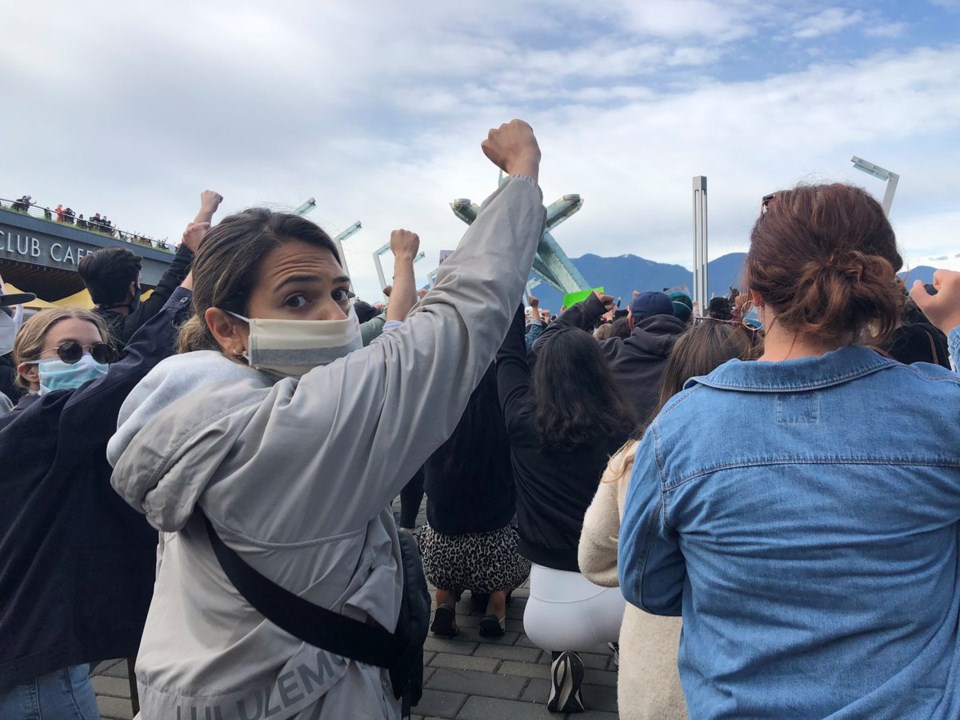 Vancouver police estimate the crowd at this afternoon's protest to be between 5,000 and 10,000 people, according to a report from Global News.

Those gathered clear out of the roadway after a woman was heard yelling, "ambulance is coming through!” 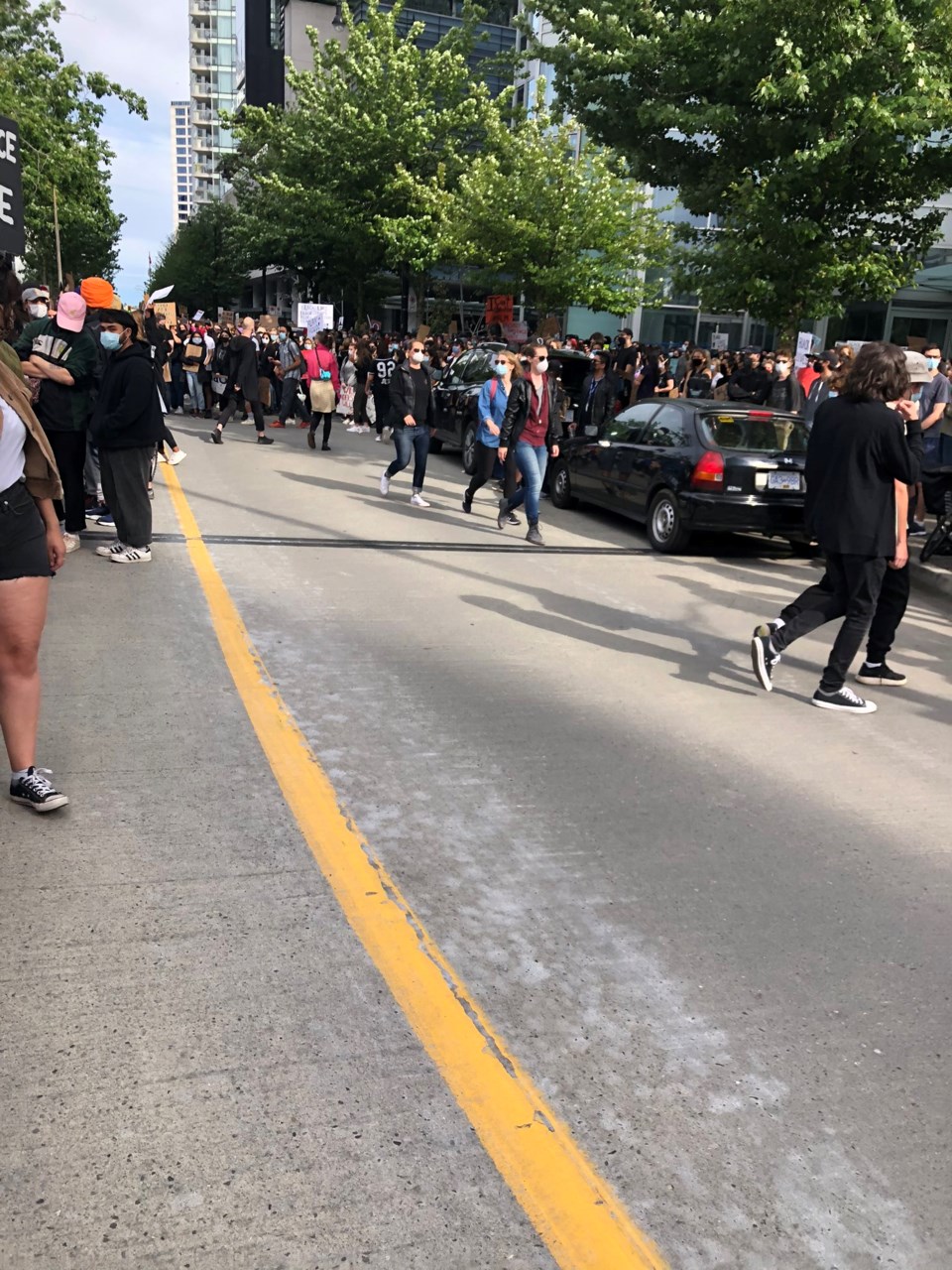 Protestors make way for an ambulance. Photo by Elana Shepert.

The crowd has spilled over from Jack Poole Plaza, flowing back as far as Cordova Street. 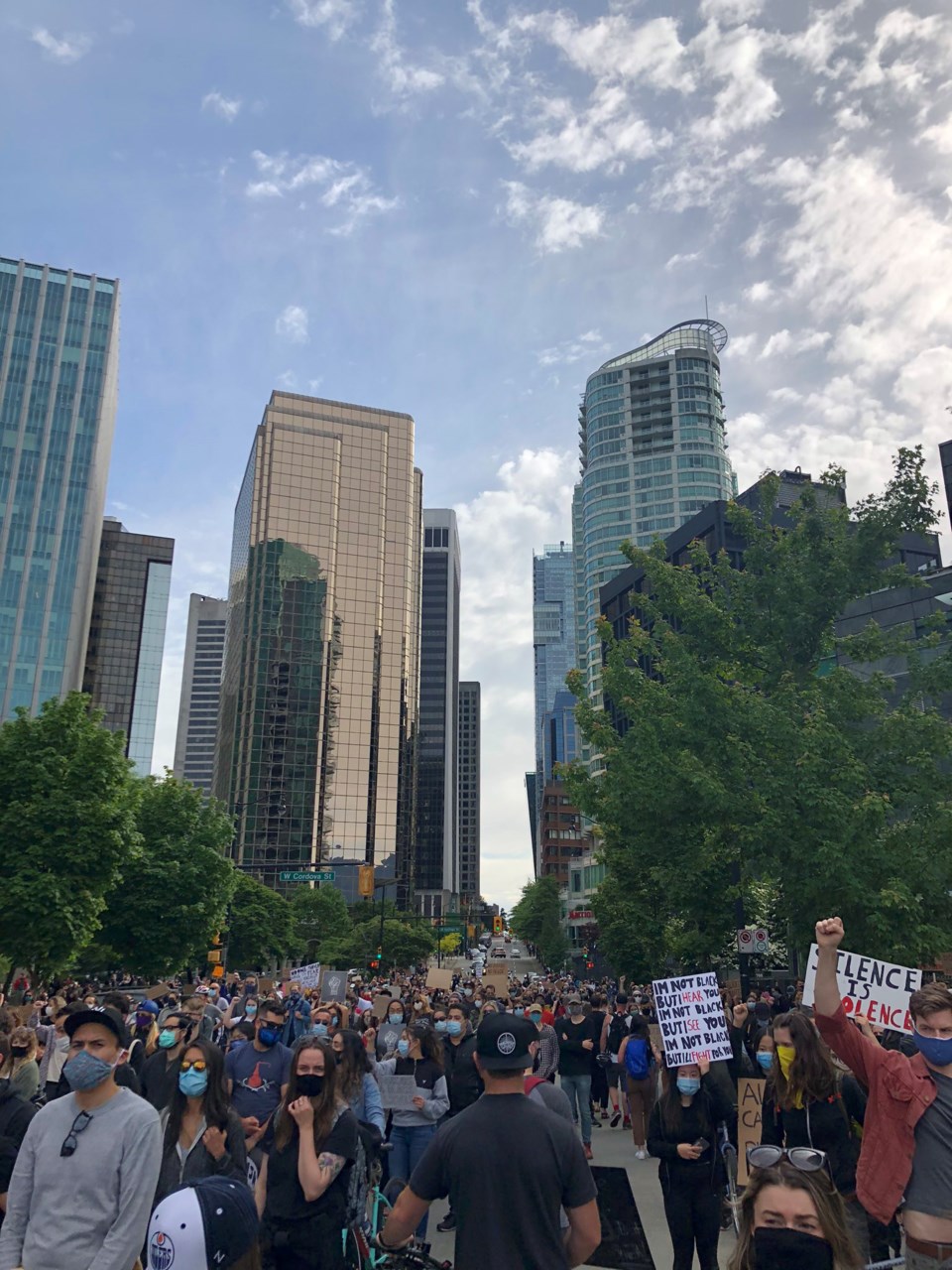 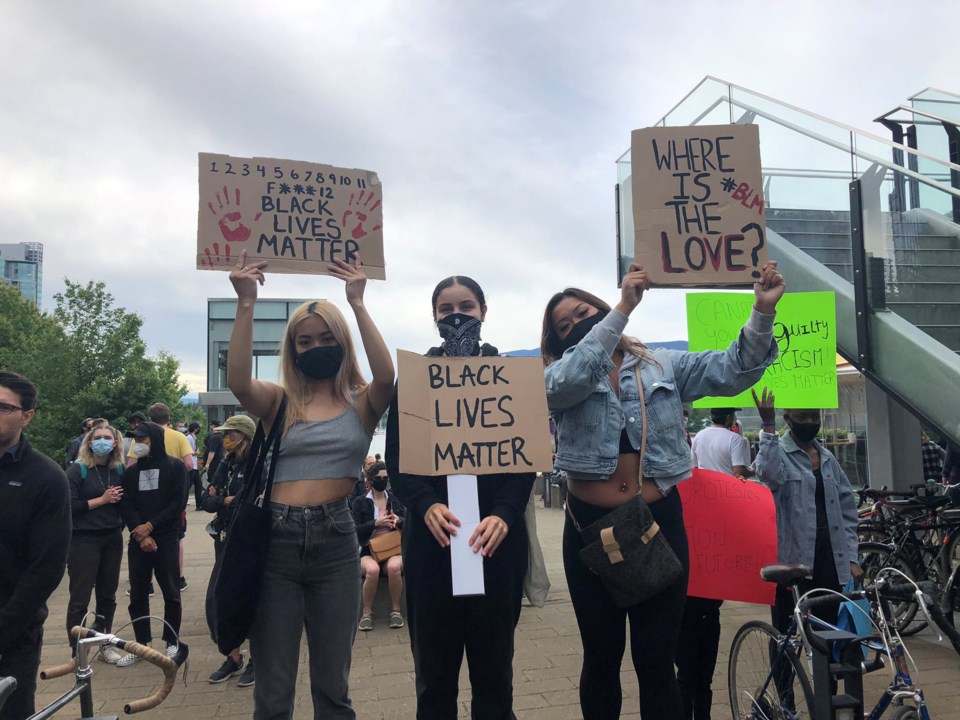 As demonstrators look for ways to scramble atop the nearby Cactus Club restaurant in search of an overhead view, volunteers are in place preventing protestors from doing so out of concerns the roof could collapse. 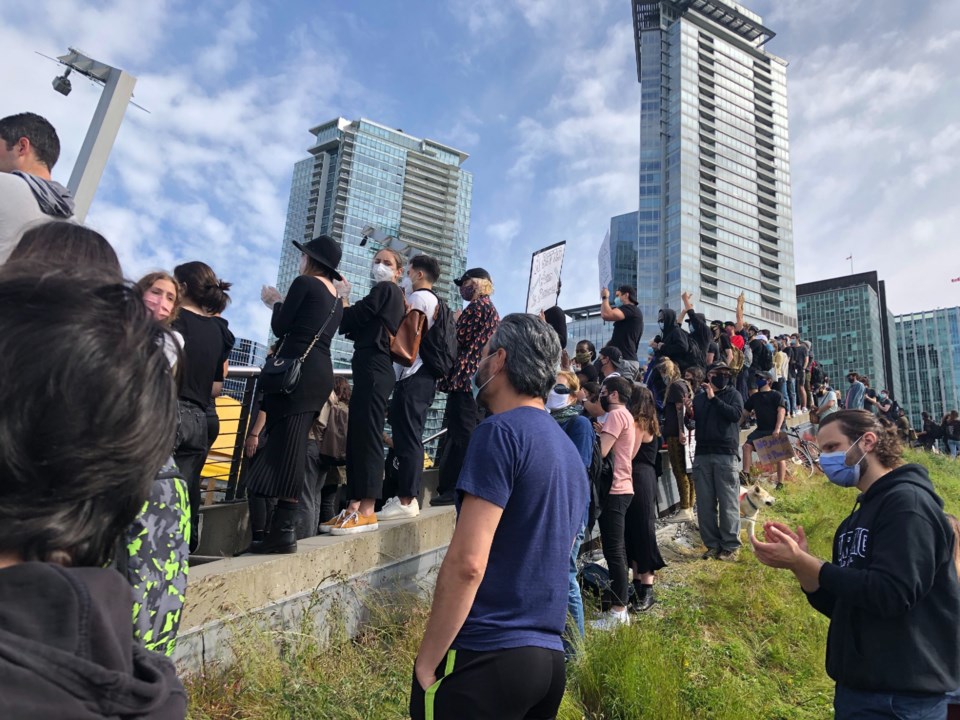 Protestors are gathering on the roof of nearby Cactus Club restaurant. Volunteers are trying to prevent protestors from doing so, concerned the roof could collapse. Photo by Elana Shepert.

Many protestors gathered in Jack Poole Plaza are white. The speakers are acknowledging white Canadians' frequent discomfort when it comes to discussing racism, explaining, “Silence has led to shame and fear... let’s focus on understanding our own privileges," adding, “You people love our culture but you don’t love us.” 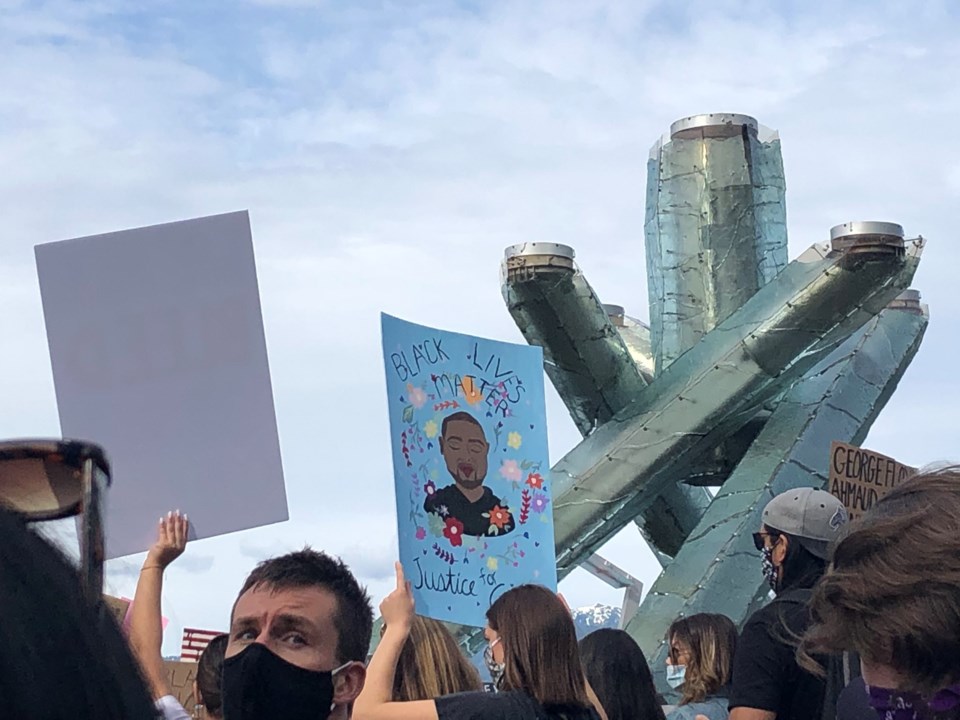 The crowd of demonstrators continues to stay engaged - when a speaker said "When I say 'Black lives,'" the crowd chanted “matter!"

When a speaker said, "When I say 'Black trans lives,'" the crowd replied, “matter!”

Many people in the crowd have chosen to wear masks amid the COVID-19 pandemic. Speakers are reminding those gathered to maintain proper physical distance, telling protestors that if they are touching someone when they stretch their arms out, that means they're too close. A first aid station is also available, while volunteers throughout the crowd are offering up hand sanitizer and free masks to those who need either. 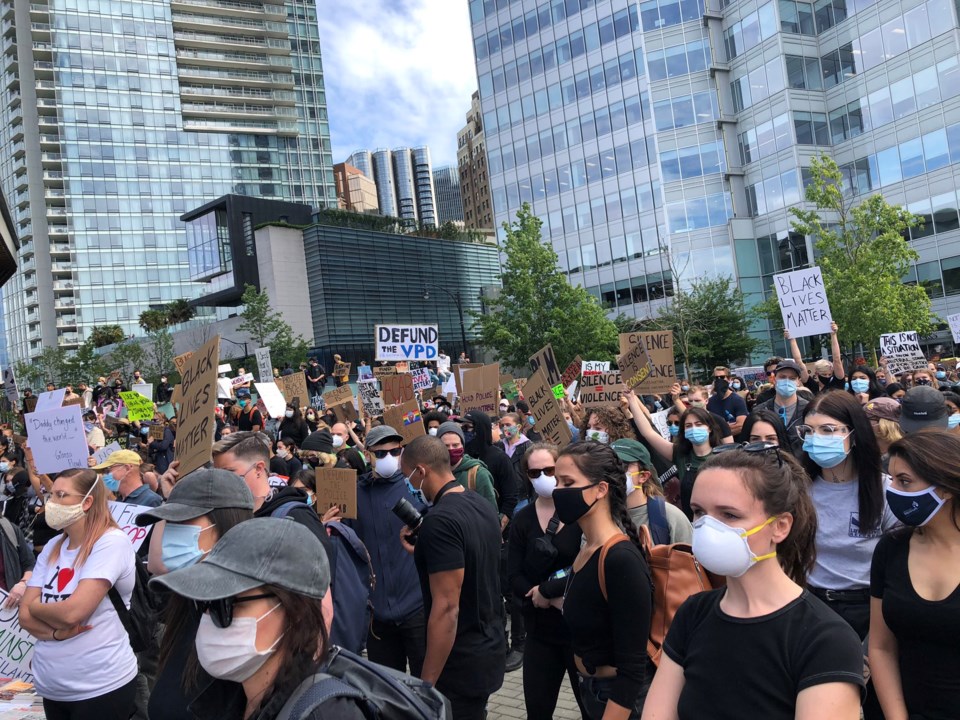 Speakers are taking to the microphone to share emotional sentiments with the crowd. As one expressed, “I’m so angry that I worry for my own sister... I’m very angry. I’m angry that they’re killing our people on the streets every single day.”

While police have blocked off the stairs leading to an upper level above nearby buildings, the overall police presence at the protest appears to be limited.

People climbed up to the rooftop of Cactus Club because police have blocked the stairs. pic.twitter.com/vot00SHeb7

In a moving moment, a speaker calls out the names of black Americans whose highly-publicized deaths have become synonymous with the Black Lives Matter movement, "whose lives have been taken away simply for the colour of their skin," said the speaker - George Floyd, Breonna Taylor, Ahmaud Arbery, Tamir Rice, Trayvon Martin, Eric Garner, Sandra Bland. The crowd repeats each name back.

Thousands of people are gathered near the waterfront, chanting “Black lives matter” in unison with fists held to the sky. A speaker says, “every single black person matters," adding, “The first step to acknowledging racism is acknowledging that it is there.” 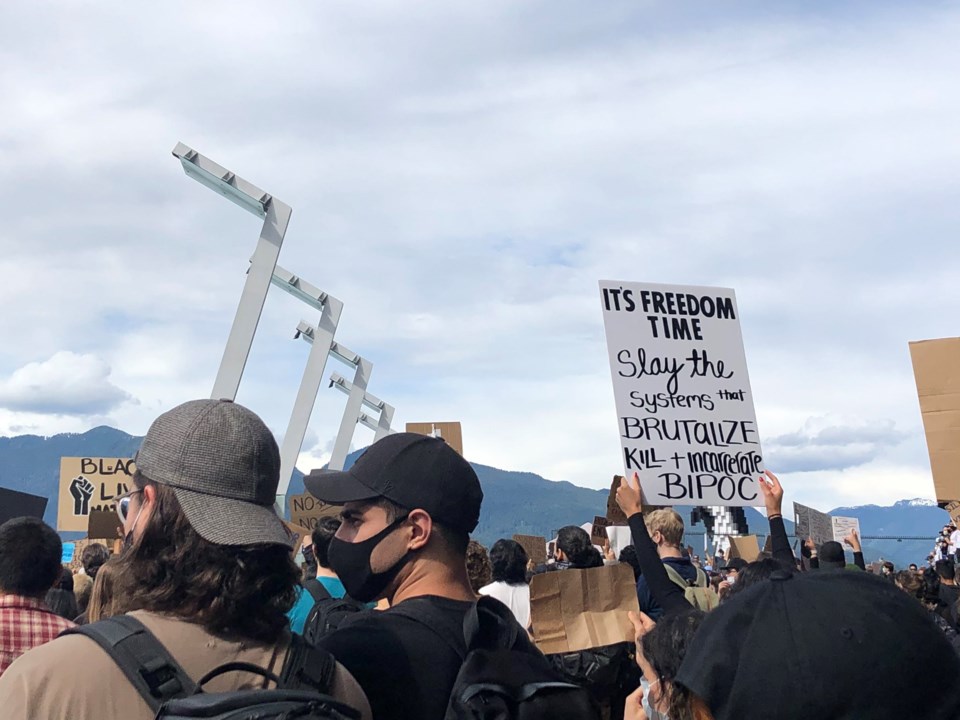 Another protest against racism is taking place in Vancouver today, following last Sunday’s peaceful gathering of approximately 3,500 people in front of the Vancouver Art Gallery.

Thousands of people have gathered at the waterfront. pic.twitter.com/jK2peJ1ZSm

The local demonstrations come in response to the killing of George Floyd by a white Minnesota police officer last month, and in solidarity with widespread protests sparked by the incident around the globe. All four officers involved in Floyd’s death have now been charged.

As organizer Jacob Callender-Prasad explained in a pair of Instagram videos, those behind the event decided to switch locations after initially planning to host a march that would involve a stop in front of Trump Tower, citing both health and safety concerns.

In the video, Callender-Prasad repeated his pleas to protestors to stay peaceful, citing the decision of major retailers like Nordstrom to board up their Vancouver storefronts, as a precaution following the rioting and looting that’s taken place in several U.S. cities.

“Your safety is a top priority - if we march, I cannot guarantee your safety; I cannot guarantee a riot will not happen," Callender-Prasad said. "We’ve seen across the world that protests have led to riots, but here in Vancouver our peaceful protest was kept peaceful, and I want to continue to have that.”

He continued, “We just want to make sure [riots don’t] happen in our hometown, where we all work, where our friends work, where we have to live, where our tax money will be put into if it gets damaged. I just can't stress it enough.”

Public health officials have acknowledged the importance of peaceful demonstrations, but continue to remind British Columbians to take health and safety precautions, including wearing a mask and practising physical distancing whenever possible. Public health officials also maintain that attending mass gatherings, like protests, is considered risky during the COVID-19 pandemic.

As with last weekend’s demonstration, Black Lives Matter (BLM) Vancouver is not directly involved in organizing Friday’s protest, but wrote in an Instagram post that members “stand in solidarity," adding, “We continue to support Black folx & others who demand to be heard & seen in the streets. We are with you.”

- With files from Megan Lalonde