Environment Canada issues warning for up to 90 mm of rainfall

The warning notes that the heavy downpours can cause flash floods and water pooling on roads.
Jan 2, 2020 9:44 AM By: Elana Shepert 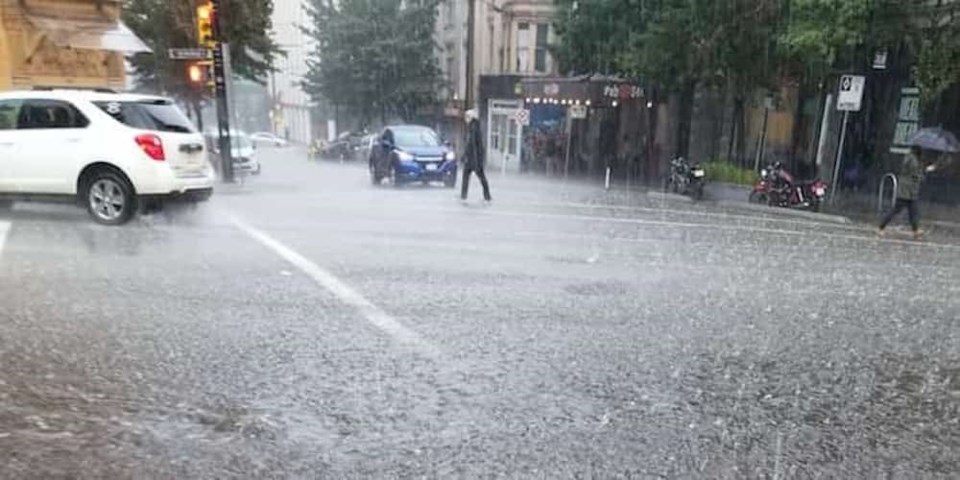 After a brief respite from heavy rain, Environment Canada has issued a rainfall warning for Metro Vancouver as a strong Pacific storm hits the B.C. coast.

Earlier this week, the New Year's Eve forecast included a warning for up to 60 mm of rainfall to fall through Tuesday evening. Now, the the warning states that rain, at times heavy, is expected from later this afternoon through Friday night.

The strong Pacific storm is expected to make its way this afternoon, with prrecipitation spreading onto the south coast by noon. What's more, the forecast notes that rain may be briefly mixed with wet snow in the afternoon.

The storm is expected to intensify later tonight and persist through Friday, bringing 60 to 90 mm of rain over the Howe Sound and Metro Vancouver - central and North Shore. The warning notes that the heavy downpours can cause flash floods and water pooling on roads. Localized flooding in low-lying areas is also possible.

The rainfall warning is in effect for:

The forecast also calls for periods of rain on Monday, Tuesday, and Wednesday next week.

Back in September, The Weather Network predicted that British Columbia would have a milder winter, but that December was a “wild card.”

Since then, the winter forecast has been updated to include the most recent prediction, which calls for milder temperatures along the B.C. coast and across much of Northern B.C. While northeastern B.C. to the southern interior will see near normal temperatures.

While the north coast region is, “expected to see above average rainfall and alpine snow,” the south coast region is expected to be drier than normal. With this in mind, the forecast adds that this dry pattern may break at times during the season. During these breaks, the Lower Mainland could have the, “potential to see several weeks’ worth of precipitation in just 5 to 10 days.”

Health Canada recalls hand sanitizer gel due to 'health risks'
Aug 4, 2020 2:31 PM
Comments
We welcome your feedback and encourage you to share your thoughts. We ask that you be respectful of others and their points of view, refrain from personal attacks and stay on topic. To learn about our commenting policies and how we moderate, please read our Community Guidelines.