Seven bears have been destroyed by conservation officers in North and West Vancouver this year after becoming addicted to human food and garbage and losing their fear of people.
0
Jul 9, 2019 9:36 PM By: Jane Seyd

Two bears killed in North Vancouver over the Canada Day long weekend are the latest casualties in a season that has already seen a high number of human/bear conflicts on the North Shore.

Seven bears have been destroyed by conservation officers in North and West Vancouver this year after becoming addicted to human food and garbage and losing their fear of people. 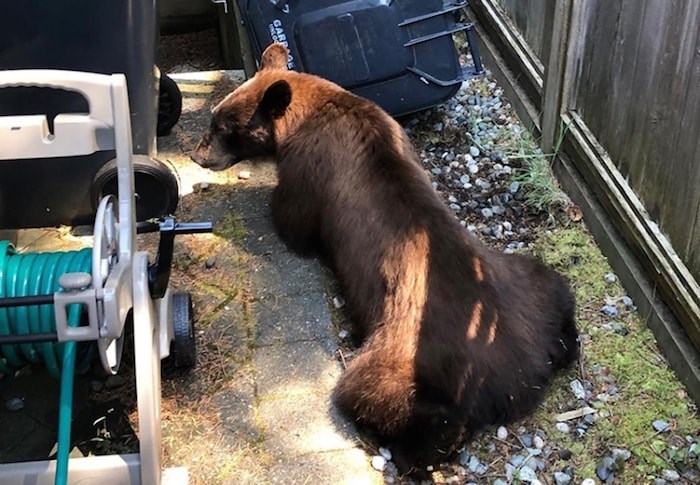 A bear spotted in Lynn Valley, not long before it was shot by conservation officers. Photo courtesy North Shore Black Bear Society

On June 29, a conservation officer shot a bear at Rice Lake in the Lower Seymour Conservation Reserve as it charged him after the bear aggressively stalked local anglers and picnickers for food, despite attempts to scare it away.

Conservation Officer Lonnie Schoenthal described several run-ins with the bear, which approached two groups of anglers, going after their backpacks, and a picnicking family. The bear repeatedly returned after being chased away several times, and got within five or 10 feet of people each time, said Schoenthal.

The last showdown happened when Schoenthal spotted the bear sneaking up on two picnickers from behind near Rice Creek.

As he tried to scare it away, the bear charged him, said Schoenthal, so he shot it.

“It was an alarming experience,” he said.

The behaviour of the bear was highly unusual, said Schoenthal, adding it’s possible that was caused by people feeding the bear in the past, although there is no direct evidence of that.

The second bad news bear drama happened the next day, June 30, when residents on Phyllis Road near Lynn Canyon Park in Lynn Valley came home to find a bear in their kitchen, eating food, possibly attracted by croissants that had been left out on a counter.

By the time conservation officers arrived, the bear had already left, but the same bear was reported trying to get into houses in the neighbourhood several times over the next four hours, including trying to access homes through sliding rear doors. “It already had the mindset he could enter people’s homes,” said Schoenthal of the food-conditioned bear. The bear was captured in a trap later that evening and destroyed.

The bear conflicts over the Canada Day weekend haven’t been the only ones this season.

In June, conservation officers were called out a number of times to a neighbourhood near Horseshoe Bay, where several bears had been getting into garbage, compost bins and bird feeders, then attempting to break into sheds and houses.

One bear tried to enter a house through a pet door for a dog, said Sgt. Simon Gravel, conservation officer for the area.

In another case, a bear climbed on to a second-floor balcony looking for food – likely because it had found either a barbecue or pet food in a similar location before. “They learn very quickly,” said Gravel.

Bears that are trying to break into homes in search of food have usually been accessing garbage and other residential food sources for a while, said Gravel.

When the public doesn’t call until the level of conflict is high, it leaves conservation officers with few options, he said.

While three bears have been relocated this year, that option is usually just to buy time, said Gravel – so an area can be cleared of specific attractants. The conservation office rarely relocates bears very far because past experience has shown, “we know the bear will be back in a day,” said Gravel. “Relocation is not a solution.”

Bears are territorial and it also makes no biological sense to move them into another bear’s area, said Gravel.

Some members of the public do get upset when bears are destroyed, Gravel acknowledged. 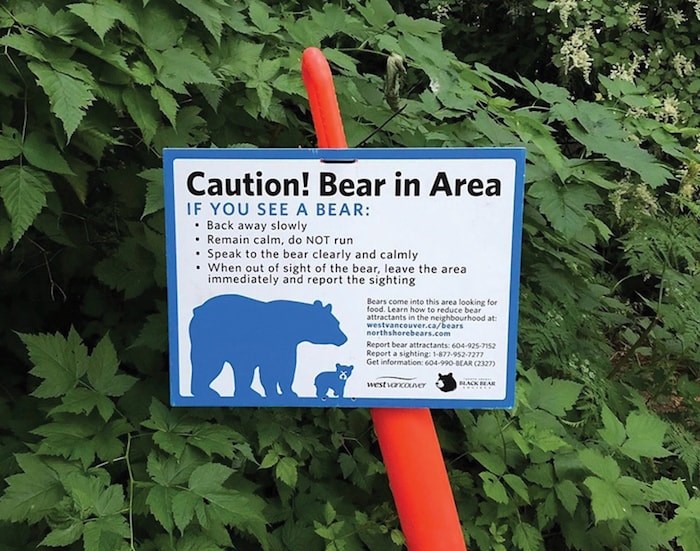 Earlier this summer, conservation officers set a bear trap near the Cypress Falls Park area for a bear that had been trying to get into a house through a window. But once the trap was set, someone in the area deliberately triggered it, said Gravel, so the bear would not be caught. That’s worrying, he said, as well as an offence under the Wildlife Act. “If we do set a trap, it’s because there is a serious concern. Imagine if the bear had broken into someone’s house the next day.”

Garbage is also bad for bears. One older female bear destroyed this summer had a necropsy performed because the animal was obviously in very poor health, said Gravel. That revealed “she had a lot of plastic in her stomach,” he said – clogging up the animal’s digestive system and making it hard for the bear to absorb nutrients from food.

Gravel said in the abstract, everyone understands our collective responsibility to take better care of garbage, but “changing the individual behaviour is difficult” because that involves asking people to “change the way they live.”

Christine Miller of the North Shore Black Bear Society said some people on the North Shore have assumed their garbage carts with locking lids are bear-proof, but they are not. It’s still important to freeze food scraps and things like fast food wrappers, she said.

Bears can also smell bird feeders and will come looking for them – even if they are hung up high in a tree, she said. Some people also don’t realize that items like dirty diapers smell a lot like a food source to bears.

The District of North Vancouver has handed out 15 $100 tickets so far this year to residents who ignore rules on when and how to put out their garbage. A special waste compliance officer is also handing out regular warnings and public education materials to residents who put their garbage containers out too early in the morning or leave them out overnight.

In West Vancouver, eight tickets and seven warnings have been handed out to residents who don't follow the rules on garbage containment and collection. Tickets in West Vancouver range from $100 for failing to keep garbage in a container or failing to remove garbage cans by 9 p.m. on collection day to $300 for not properly disposing of garbage or not properly enclosing wildlife attractants.