It remains a mystery what happened to Vancouver’s most famous bird, Canuck the Crow, but his memory will live on in many ways.

One way is through more than 40 artworks created by various artists who were inspired by the mischievous crow over the past five years.

Vancouver’s unofficial winged ambassador disappeared on Aug. 30 last year and he hasn’t been spotted at his usual hangout zone in East Vancouver or the Still Creek Rookery in Burnaby since. While there are many theories as to what happened to Canuck, without concrete evidence Shawn Bergman, who is widely known as the crow’s human best friend, said he’d always hold out hope his feathered pal might come home. 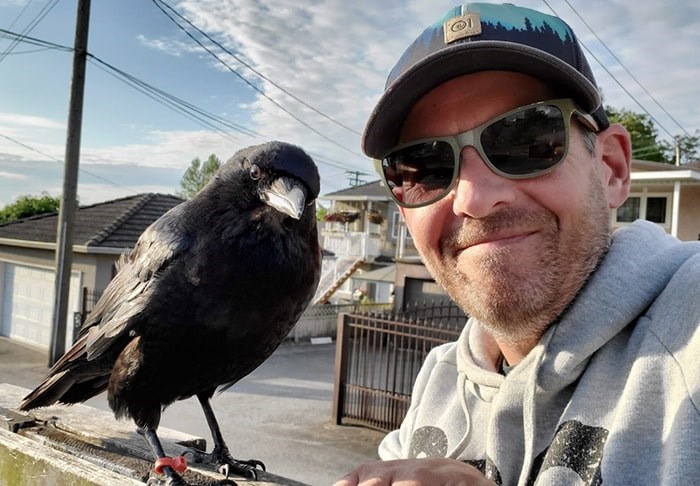 “There is no answer right now and I could potentially be facing my whole life with no answer,” Bergman told Vancouver Is Awesome.

“Show me a body or give me some actual proof of what happened to him and I’ll move on. But other than that I’m still going to think that he’s still out there or that someone has him.

“I need some sort of closure; I need to know what happened.” 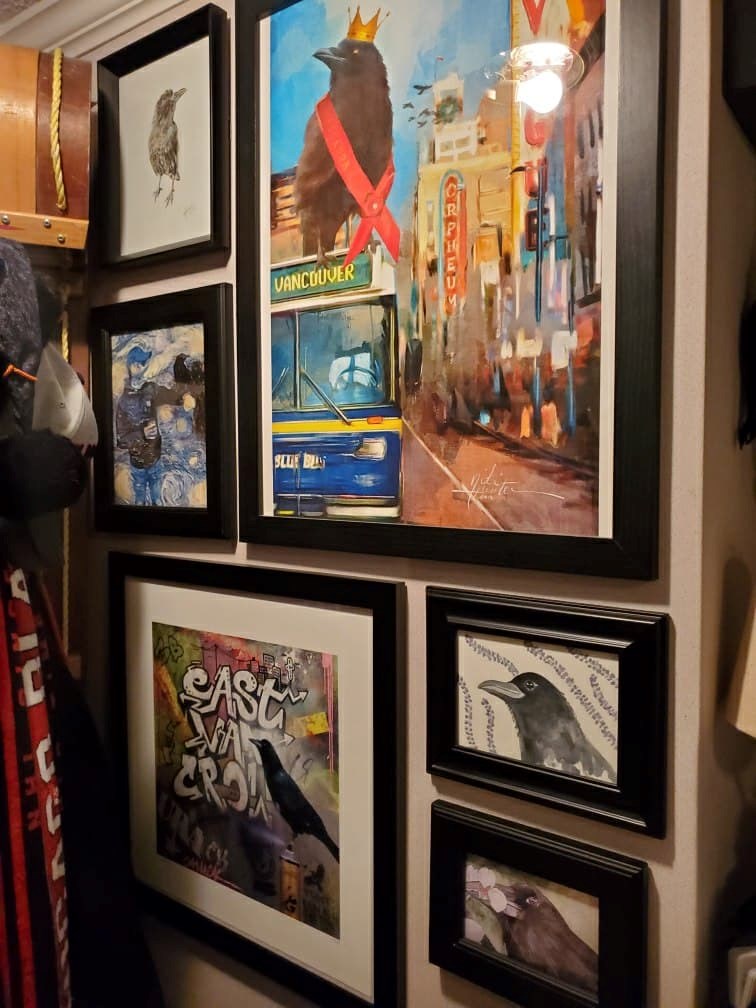 More than 40 Canuck the Crow art pieces hang on the walls of Shawn Bergman's home, created by his many fans. Photo: Supplied by Shawn Bergman

The charismatic crow is known perhaps equally for being “that crow that stole a knife from a crime scene back in 2016,” “that crow that ate my McDonald’s" and “that crow with a human friend they made a documentary about.”

The story goes that Canuck was found as a hatchling that had fallen from a nest in East Vancouver and was raised by Bergman’s landlord's son. Once he was strong enough, he was released into the wild. Although, Canuck never left the area and Bergman spotted him sitting on his backyard fence one day.

“He hung around the yard, not wanting to go anywhere,” Bergman said. “At that point, I walked up and introduced myself, he hopped on my arm and the rest is history.” 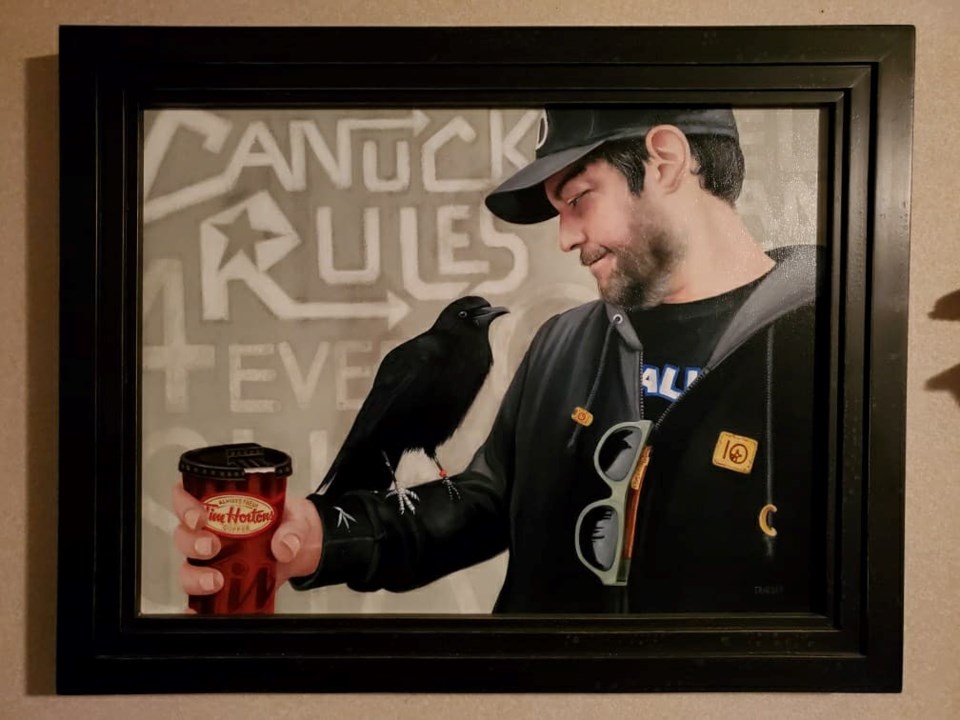 More than 40 Canuck the Crow art pieces hang on the walls of Shawn Bergman's home, created by his many fans. Photo: Supplied by Shawn Bergman

His fame has grown substantially over the years, with the help of Bergman who had been documenting Canuck's adventures through the Canuck and I Facebook page since 2015. The bird now has more than 126,350 followers, and they all want to know what happened.

For now, Bergman is reminded of how Canuck touched the lives of so many people through an incredible amount of artwork that hangs on the walls of his home.

Bergman shared photos of the beautiful artworks with V.I.A so that Canuck’s memory would stay fresh in the minds of Vancouverites. 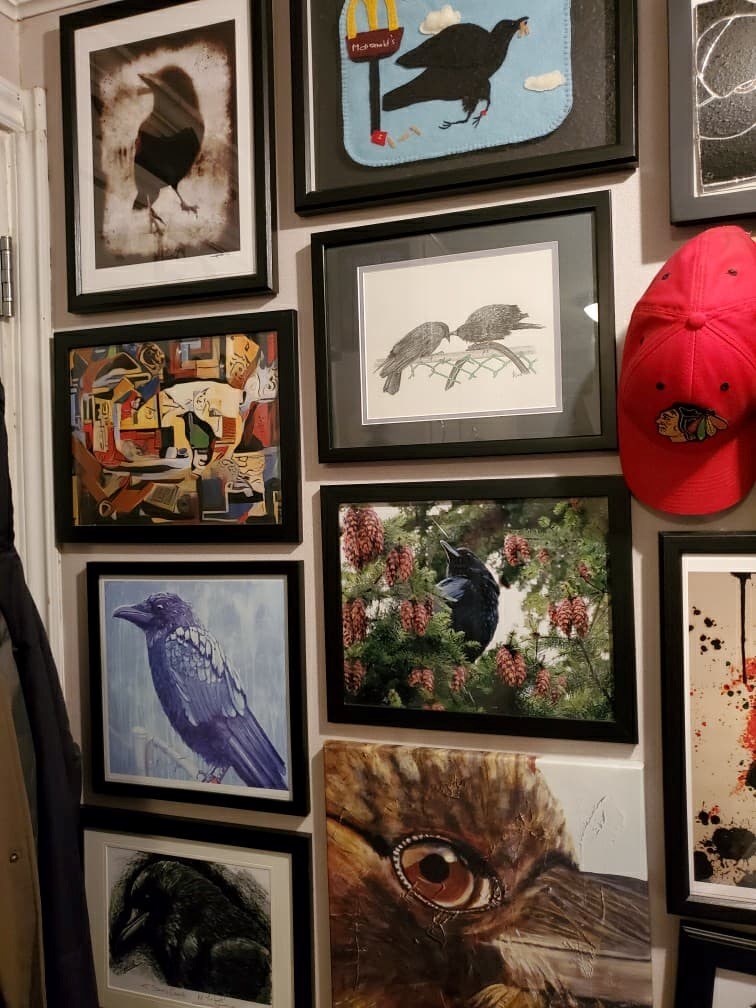 From professional canvas oil paintings and stained glass designs to simple sketches, Bergman said the artworks were all special and unique in their own way. He said one item he was quite fond of was a felt art piece that was sent to him from a grandmother in Michigan.

“I would say it’s a little bit of a double-edged sword,” the 43-year-old said while discussing how he feels about the art.

“It gives me a lot of joy seeing the pieces and seeing all the different interpretations of Canuck, especially when it is taken from photos and captures a moment in time, which is absolutely beautiful. But it is something that’s also hard because he’s gone right now. It makes it a little more difficult to look ahead.”

With memories of Canuck everywhere he turns, Bergman said there was no way “to escape thinking about him.”

“For me, now, it’s about keeping his memory alive, even if he’s not still with us,” he said.