A Vancouver wildlife photographer has shared footage of an epic but short-lived battle between two hungry eagles in Alaska, U.S. 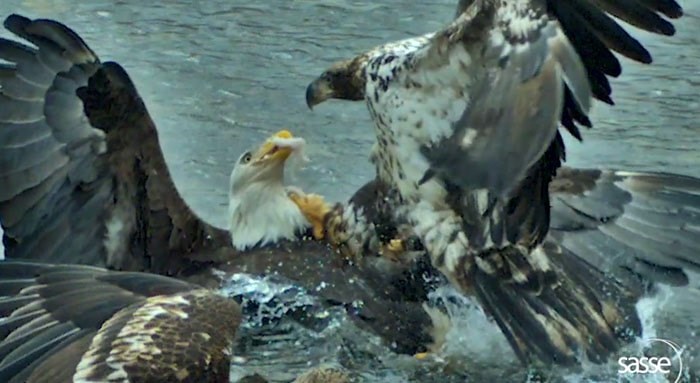 A screen shot of the two eagles fighting in Alaska. Photo: Christian Sasse

Photographer and videographer Christian Sasse was filming at Dutch Harbor on Amaknak Island in Unalaska about a year ago when he captured the savage attack.

Sasse told Vancouver Is Awesome the moment happened so quickly; he didn’t even know he had the footage until he was sorting through it.

Captured with a slow-motion camera, the minute-long video shows a juvenile eagle swoop aggressively at an adult eagle enjoying a piece of fish — safe to say the young eagle was feeling a little 'hangry.'

“I was just pointing the camera at the eagles and then suddenly another eagle came,” Sasse recalled.

“I didn’t even know I had the footage because it happened so quickly. What you see over a whole minute actually all happened in less than a second.”

The fishing port is known for its large groups of eagles that are said to behave more like pigeons and are considered pests by some of the locals.

“In February and March there are a lot of eagles in Dutch Harbor — typically around 700 to 800 — in a very small space,” Sasse said.

He said the eagles gathered there to take advantage of the easy access to fish from the many fishing boats.

“The eagles absolutely raid the fishing boats. They completely invade them," Sasse said.

Sasse said the slow motion video had garnered a lot of attention from animators and cartoonists interested in wing movement and structure.

Sasse is known for his incredible photos and videos of eagles, and recently shared rare footage of eagles bathing in Metro Vancouver.