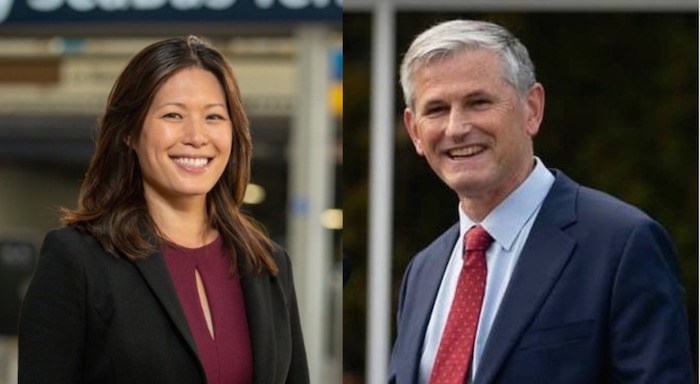 “Bowinn is a very pretty lady, and she knows that she’s got ‘it’,” Thornthwaite says as the rest of the group giggles.

“Many of us were embarrassed to the point of being appalled,” Wilkinson told reporters Oct. 13. “This episode should never have happened.”

“I want to apologize to Bowinn Ma,’ Wilkinson said.

A video clip emerged on the weekend in which several BC Liberal members, including Wilkinson, were staging a “roast” of retiring West Vancouver MLA Ralph Sultan.

“Many of the people who were at Ralph’s retirement event thought Jane’s comments were in extremely bad taste,” Wilkinson said. “The embarrassment was immediate.”

He said he wished he could have intervened without embarrassing Sultan.

At 10 a.m. on Sunday, Thornthwaite tweeted a response: “I have huge respect for all women who push through glass ceilings. I’m one of them. So is Bowinn Ma.”

Thornthwaite acknowledged her comments "fell flat and were inappropriate," and said she apologizes "unreservedly." In her own post on Twitter, Thornthwaite added that she reached out to Ma to apologize to her directly.

"I have huge respect for all women who push through glass ceilings. I’m one of them. So is Bowinn Ma," Thornthwaite said. "I commit to doing better moving forward.

"This video has completely derailed the BC Liberal election campaign.”

BC Green Leader Sonia Furstenau also called out the gaffe.

If women are not warm in the workplace, we are castigated as rude. If we are friendly, we get this. @BowinnMa is incredibly professional and her ability to forge friendships across party lines makes the legislature better. She is owed an apology. https://t.co/xhwCxWJ6mS

“This is appalling,” Furstenau tweeted. “If women are not warm in the workplace, we are castigated as rude. If we are friendly, we get this.”

OPINION: Former BC Green leader Andrew Weaver declares his support for BC NDP MLA Bowinn Ma
Sep 28, 2020 9:49 PM
Comments
We welcome your feedback and encourage you to share your thoughts. We ask that you be respectful of others and their points of view, refrain from personal attacks and stay on topic. To learn about our commenting policies and how we moderate, please read our Community Guidelines.