He's put his formal support behind her

North Vancouver-Lonsdale BC NDP MLA Bowinn Ma secured the formal support of a political figure who once entirely embodied a rival party in the B.C. Legislature.

“Over the last three years I have been thoroughly impressed with Bowinn Ma,” says Weaver in the statement. “There are few elected officials who work harder for their community and it is evident that she cares deeply about people. Bowinn has been a breath of fresh air in the Legislature and is one of our strongest voices in the fight against climate change. I certainly hope she is re-elected in North Vancouver-Lonsdale.”

The announcement comes hours after the BC Green Party announced Christopher Hakes, a business and sustainability professional, as their candidate in North Vancouver-Lonsdale.

Interestingly, the press release avoids the words “endorse” and “endorsement”. Ma’s campaign office explained that they “cannot speak to Dr. Weaver’s choice of words, but Bowinn is honoured to have his support in this election.”

Although he announced that he would not be running for re-election in October 2019, the Nobel Peace Prize winner and former MLA for Oak Bay-Gordon Head has already drawn attention by championing the BC NDP.

Earlier in August, Weaver informally endorsed Premier John Horgan — also, short of using the word “endorse” — in a stunning admission on Episode #92 of This is VANCOLOUR. Weaver’s backing for Ma marks his first formalized declaration of support for any candidate ahead of the October 24 election.

While Weaver provided advisory consultation for Cam Brewer and Kim Darwin in a BC Green leadership contest won by MLA Sonia Furstenau earlier this month, he had quit the party caucus in January to finish his MLA term as an independent. Nevertheless, the optics of a former opposition party leader politically supporting members of the governing party is astonishing.

Under Weaver’s leadership in 2017, the BC Greens chose to remain an opposition party rather than form a coalition government by signing a Confidence and Supply Agreement with the BC NDP, effectively stabilizing the BC NDP minority government. Although independent, Weaver’s remarkable shift to supporting Premier Horgan and now, specifically, a BC NDP MLA, seemingly undermines the BC Greens’ election efforts.

In May, on Episode #77 of This is VANCOLOUR, Bowinn Ma somewhat self-deprecatingly conceded that her riding is a target for the BC Liberal Party.

“Even before COVID, I was targeted a lot by the BC Liberals and I don’t think that they’re wrong to target this seat. I’m the first BC NDP MLA to win a seat on the North Shore in a very long time, since 1991… So, history says that I will probably lose my seat at the next election, honestly.”

However, with little fanfare, the BC Liberals announced that accomplished geoscientist Dr. ‘Lyn Anglin would be their candidate in North Vancouver-Lonsdale.

With votes already being cast, there is urgency amongst all candidates in the province’s election to make a splash with voters, especially when campaign tactics are limited due to the COVID-19 pandemic. 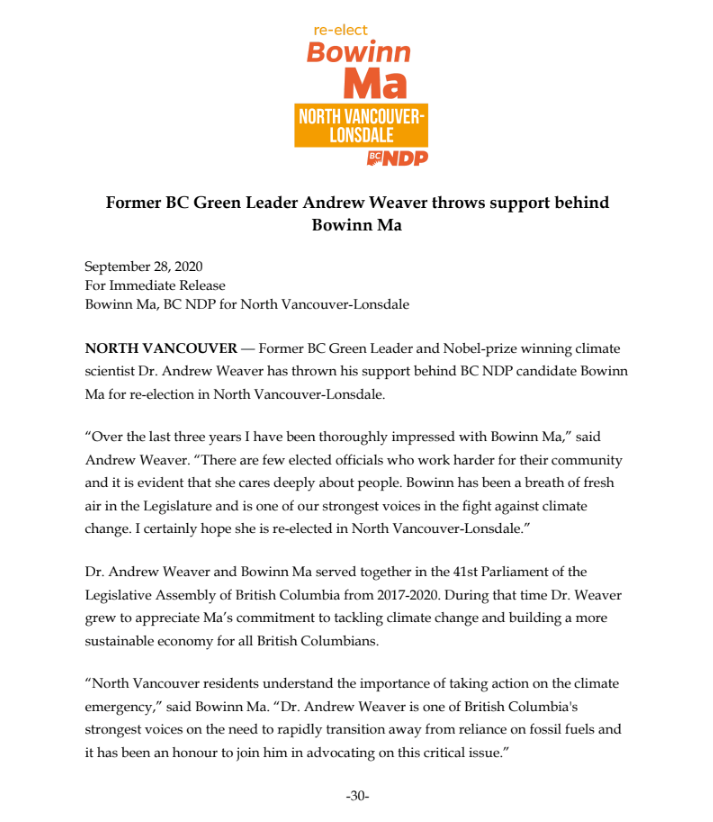