Green, Liberal leaders gang up on Horgan in televised debate
Oct 14, 2020 7:16 AM By: Nelson Bennett 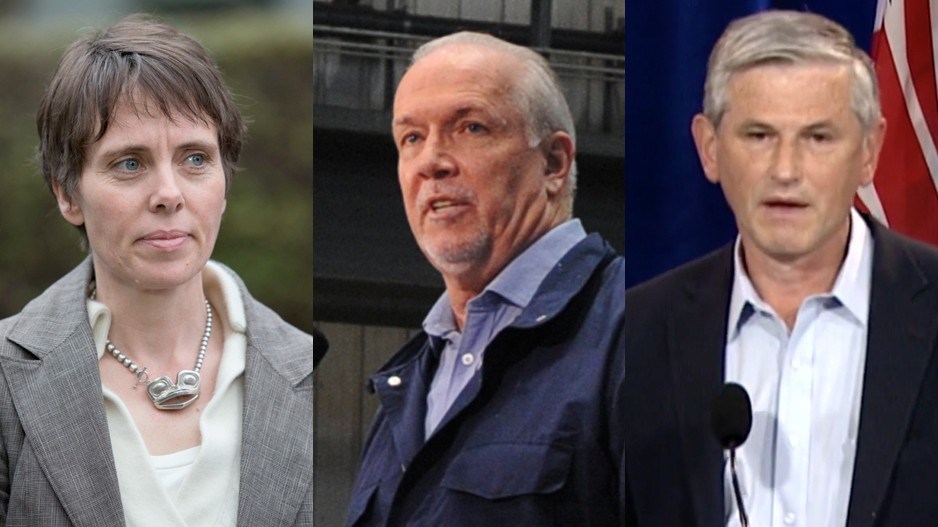 The unprecedented civility and co-operation between political parties in the BC Legislature throughout the COVID-19 pandemic was shattered in public Tuesday night when Green and Liberal Party Leaders Sonia Furstenau and Andrew Wilkinson tag-teamed against NDP Leader John Horgan for calling a snap election during a pandemic.

Furstenau had given Horgan assurances that his government was stable, the Greens would not trigger an election and that Horgan's snap election call was therefore unnecessary.

“We didn’t need to be in this election,” Furstenau said Tuesday night in what is to be the only televised leaders' debate.

Many British Columbians also agree the election was unnecessary.

Polling released Tuesday by Insights West shows 58% of British Columbians disapprove of Horgan’s election call, but otherwise approve of Horgan and the NDP, which enjoy a substantial lead over the Liberals.

“He decided to look out for himself by calling this unnecessary election,” Wilkinson said.

Horgan said he “grappled” with the decision but defended it by saying that B.C. will be dealing with the pandemic and its fallout well into next fall “and beyond,” and that it is therefore necessary to have a strong mandate.

“I think the best course of action is to put the politics and the election behind us and focus on the needs of British Columbians,” he said.

In a wide-ranging debate that covered everything from homelessness and child care to racism, leaders were asked questions agreed to by major broadcasters.

Horgan displayed none of the testiness Tuesday night that earned him the nickname “Hulk Horgan” while he was in opposition.

Wilkinson said B.C. “desperately needs a plan” for its economic future, suggesting everything the NDP has done to date has been short-term.

“We believe that the livelihoods of British Columbians are at stake,” Wilkinson said.

The Liberals have vowed to eliminate the PST for one year to help kick-start the economy and leave more money in the pockets of B.C. consumers.

Furstenau slammed the pledge, saying it would cut $10 billion in government revenue at a time when government spending is needed.

“Why would you want to put more deficit into government coffers right now?” Furstenau asked.

Wilkinson responded that deficit spending is necessary in what is tantamount to a “wartime economy,” and vowed a Liberal government would "get back to a balanced budget within about five years."

Moderator Shachi Kurl said B.C.'s economic recovery is driven in part by large resource projects, like the LNG Canada project. She asked Furstenau if she would support those projects if the Greens are once again in the position of propping up a minority government.

She didn't directly answer the question but hinted she wouldn't.

“If we are propping up a dying fossil fuel industry with taxpayer money, what we're going to get is more emergencies in the future,” Furstenau said, pointing to forest fires in the U.S. as an immediate example.

“There is no doubt that we are in a climate emergency right now and the last thing that we need from governments is to be doubling down on investing and propping up and subsidizing, to the tune of $6 billion, this industry.”

The pandemic revealed problems in B.C.'s long-term care home system, which has suffered the most in terms of infections and death rates  – problems that Horgan said the previous Liberal government created through cuts to front-line workers. He said nine out of 10 care homes did not have the staff to meet minimum care standards and blamed the previous Liberal government.

“You fired 10,000 people,” Horgan said, adding most were women. The consequences were ”profound and tragic,” when the pandemic hit, Horgan said. The NDP have pledged to hire and train 7,000 front-line health care and long term care workers.

Horgan was taken to task for not delivering on his pledge to provide $10 a day child care and was asked if he thought a 2027 target could be met. Horgan said he thinks it can be met, but also blamed the Green Party for not supporting the NDP's plans for daycare.

“We can get it done in the next seven years,” Horgan said.

Wilkinson slammed the Horgan government for delaying the rollout of a pandemic relief package and suggested the money was being used as an election ploy.

“Every other province in Canada rolled out their emergency relief package in June or July, and you dragged it out until three days before the election because you thought it would serve your interest,” Wilkinson said.

But Horgan said of the $6 billion in emergency funding that was approved, $3.5 billion was released in March.

On housing affordability, Wilkinson said the NDP speculation and vacancy tax is a failure and said rent has increased, on average, $2,000 a year for many renters since the NDP took office.

“You’ve got to get out of your neighbourhood and talk to people, my friend,” Horgan snapped back, adding that the tax has freed up 11,000 condos for renters.

“You treat them with a tent or a run-down motel,” Wilkinson said. “Your policy has been a colossal failure.”

“You don’t have solutions," Horgan hit back. "If you did you would have implemented them."

Horgan was taken to task for delays and cost overruns on the Site C dam, something he managed to dodge by reminding viewers that Site C dam was a Liberal project that his government only agreed to proceed with because cancelling it would mean having to eat $4 billion in sunk costs.

“Site C was not our project,” Horgan said. “We inherited it. We’re doing the best we can.”

On forestry and conservation, Furstenau said logging of old growth has continued under the Horgan government apace. But Horgan said her party supported his government’s plan to protect old growth with a moratorium.

“A few weeks ago you thought it was a good one,” Horgan said of the recently announced plan for old growth forest management.

Surprisingly, though leaders were given the chance to ask questions of each other, neither Horgan nor Furstenau brought up the recent controversy that has plagued the Liberals: a crude, sexist "joke" made by Liberal candidate Jane Thornthwaite. However, the moderator did bring it up and asked Wilkinson to address it.

In a roast held in honour of retired Liberal MLA Ralph Sultan, Thornthwaite joked about NDP candidate Bowinn Ma, and suggested she had enthralled Sultan because she is "pretty."

Both Thornthwaite and Wilkinson have apologized for the remark, and Wilkinson again disavowed the comments Tuesday night, saying, “We have to move into a world where those kinds of things aren’t acceptable."

On climate change policies, Wilkinson said the NDP government's CleanBC plan was "a giant hot air balloon with not much in it," while Horgan said Wilkinson stopped caring about climate change in 2011, which is around the time the former Liberal government froze the carbon tax at $30 per tonne.

Asked what his policy would be on carbon taxes, Wilkinson said B.C's carbon tax needs to be "in synchronization" with federal carbon pricing.