Full 2020 B.C. election results likely to be unknown until well into November

With hundreds of thousands of mail-in ballots requested, it could take weeks to get election results finalized
Oct 19, 2020 2:27 PM By: Glen Korstrom 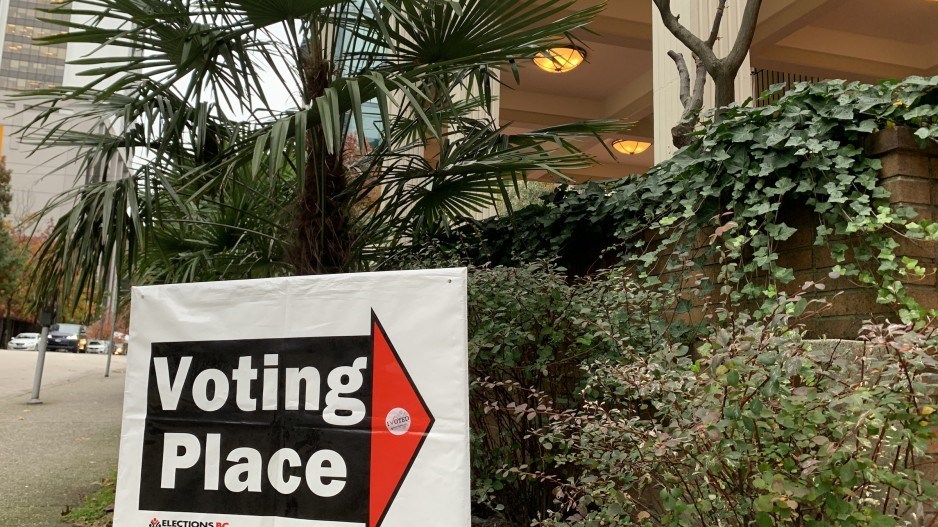 One of the advance-voting polling stations is at the Best Western Hotel on Howe Street. Photo by Glen Korstrom/BIV

British Columbians will be uncertain about the full result of the October 24 election for weeks afterward because so many voters are choosing to vote by mail.

As of October 16, approximately 717,000 voters have requested vote-by-mail packages, and 177,000 of those packages had been returned to Elections BC, according to the non-partisan office of the B.C. legislature responsible for conducting the election.

The pandemic has prompted an enormous increase in mail-in voting, given that in 2017, only 6,517 people voted by mail.

All mail-in ballots will not be counted for at least 13 days after the election, or starting on November 6, Elections BC spokesman Andrew Watson told BIV.

While all ballots cast in advance polls, and on election day, will be counted on October 24, there will be a delay in counting mail-in ballots in part because all of those ballots must be sent back to electoral officers in each riding from Elections BC’s offices in Victoria, he said.

Elections BC must also verify that each vote cast by mail was made by someone who is eligible to vote.

The organization then must also cross-reference the names of people who have voted by mail with the voters’ list to ensure that the person did not also vote in person in an advance poll or on election day.

“That part of the process is automated,” Watson said.

The counting, however, will be done by hand.

All parties will be able to appoint scrutineers to watch the counting of the mail-in ballots. Some debate may take place in interpreting a voter's intention on the ballot, particularly for early mail-in ballots that were issued before the cut-off for candidate nominations. Those ballots required the voter to write in the name of the desired candidate.

“We may have districts where they don’t have nearly as many mail-ins as the others,” Watson said. “They may be able to start before [ridings] that have a lot more mail-ins, but the counting will not start any sooner than within 13 days.”

Watson said that he doubted that it would take “weeks” past November 6 for final results, although counting could take several days.

Elections BC has hired at least “hundreds” of people to be able to conduct the counts, although Watson did not have an exact figure for how many people have been hired.

It is legal for an eligible voter to request a mail-in ballot, and then vote in person instead. In those cases, however, the voter must destroy the mail-in ballot – not use it, and not return it to Elections BC.

While Watson said voter fraud is rare, it can happen.

When voters cast ballots – in person or by mail – they are usually required to sign their name on a form that says that they are eligible to vote and that they have not yet voted. This year, because of the COVID-19 pandemic, election officials are getting people who vote in person to say the declaration instead.

Penalties for making a false declaration range up to $20,000 and up to two years in prison, with the person is also being disqualified from voting or serving as an MLA for seven years.

Watson, however, said he is unaware of anyone ever being penalized for voter fraud in a B.C. election.

The deadline for mailing a ballot back to Elections BC has passed, and Watson said anyone who has a mail-in ballot should take it to a polling station to use there, or otherwise vote in person.

All mail-in ballots within a riding must be received by Elections BC officials in that riding from Elections BC head office before any ballot counting can start in the riding, Watson said. That process may also prompt delays.