Premier John Horgan continues to have the highest approval rating in Canada, according to a new poll.

The survey, conducted by the Angus Reid Institute, finds that the B.C. premier's approval rate has increased since last quarter. Horgan had an approval rating of 64 per cent in the December 2020 survey; he has a rating of 66 per cent this March.

Horgan survived a "politically risky announcement that the now $16-billion Site C hydroelectric dam would indeed be completed," note report authors, adding that the province's mass immunization plan aided his recovery. They note that the new strategy made Canada-wide headlines for extending the time between first and second doses of COVID-19 vaccine to four months.

After initial conflict over this timeline, other provinces announced they’d adopt or study the same four-month spacing.

While Horgan's rating has improved, however, it has dropped by four points since the survey was conducted in the summer of 2020. Back then, his approval rating was nearly 70 per cent. 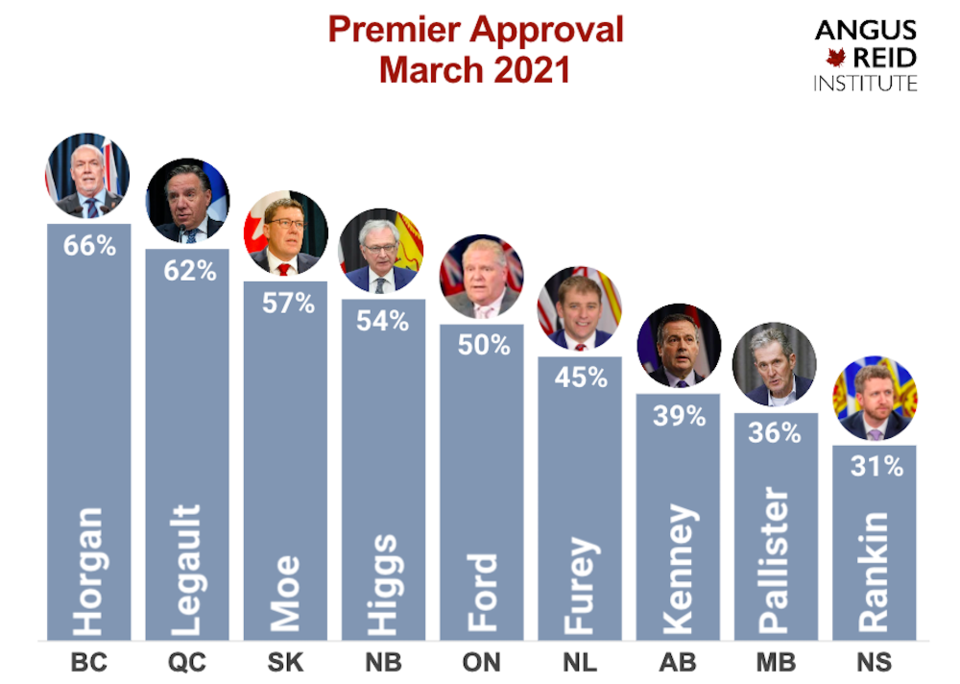 Angus Reid notes that premiers will be judged over the next three months on how they execute their vaccine distribution plans.

"For now, however, Canadians are still more inclined – for the most part – to give their provincial leaders better assessments than worse in terms of approval," note report authors.

Indeed, five of Canada’s premiers receive the endorsement of at least half of their respective provincial constituencies, including B.C.’s John Horgan.

Quebec’s François Legault is approved of by 62 per cent of Quebec residents. After imposing uniform restrictions and curfews across the province in January, Quebec returned to its colour-coded, regional system of restrictions in February. "This has meant the reopening of stores, restaurants, and movie theatres in parts of the province, though not the densely populated red zones."

In Saskatchewan, Premier Scott Moe’s approval slips four points over the last quarter to 57 per cent. "The Premier who won re-election handily last fall has been under pressure to tell an electorate that skews towards fiscal conservatism when the province will emerge from a period of deficit spending and return to balanced budgets," adds Angus Reid.

OPINION: Premier Horgan planned to gather with family for Christmas while us peasants actually follow the rules
Dec 18, 2020 3:42 PM