"Rents have not been forgiven, only delayed, even for those most impacted by the pandemic."

Vancouver City Council has unanimously voted in favour of a program to forgive rent debt accrued over the course of the coronavirus (COVID-19) pandemic.

On Thursday, Oct. 15, Council approved a motion for Mayor Kennedy Stewart to advocate for a rent forgiveness program to the Government of British Columbia for those who cannot pay their full rent due to financial impacts from the COVID-19 pandemic.

While the Province placed a temporary ban on evictions due to the COVID-19 pandemic, tenants are expected to pay back all of their unpaid rent by July 21, 2021.

The motion, submitted by Councillor Swanson on behalf of the Renters Advisory Committee, emphasizes that many renters will not be able to pay the accrued rent amount once the eviction ban is lifted, even with a provincial payment plan in place.

The committee underscores that "Rents have not been forgiven, only delayed, even for those most impacted by the pandemic."

Loans from a “rent bank” to cover arrears, which must be paid back," can also put many renters are at risk of ruinous rent debt through no fault of their own," read the motion.

Before the vote, Stewart underscored in the meeting that "absolutely we'll advocate for this if it passes and we'll be supporting it."

Nine councillors voted in favour of the motion; Councillor Dominato and Councillor Blingh were absent. 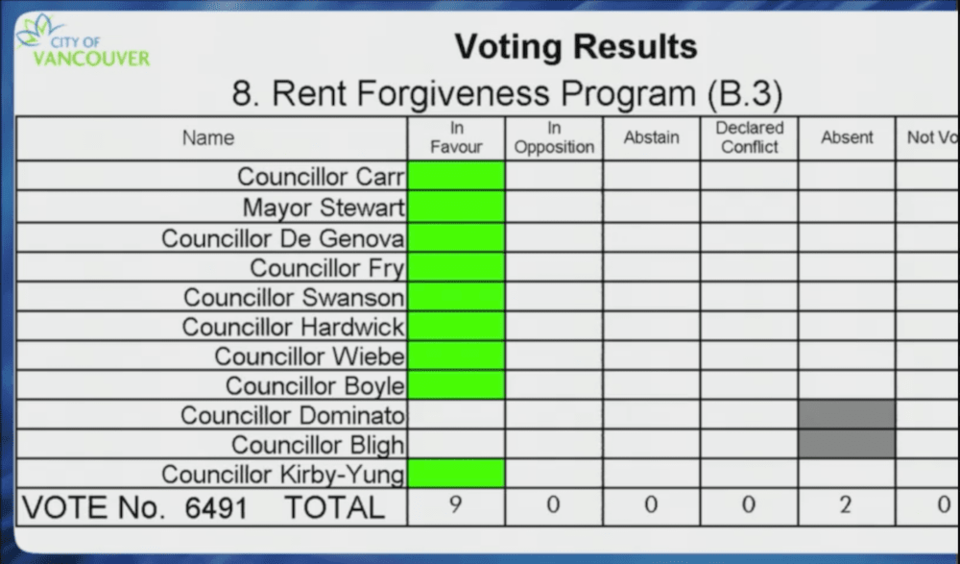 The Housing Crisis in Vancouver

The committee says the challenges brought on by COVID-19 have exacerbated the existing housing crisis in Vancouver, and further jeopardized people’s abilities to find and keep their housing.

Many unhoused individuals are currently staying outside or camping within city-limits - such as the Strathcona Park encampment - who are unable to secure tenancies due to "unaffordability, unavailability, and prejudice," says the committee.

Renters Advisory Committee spokesperson Taylor Fleming tells Vancouver Is Awesome in a phone interview that the relocation of Oppenheimer residents in the spring should have included more consultation with the campers.

"They need to work with the Strathcona residents to see what they want. Some people like the no-guest policy, they think it keeps them safe. Some like cameras," explains Fleming. "Others think yeah--that's really high surveillance."

Fleming adds that there isn't a "quick fix" to the homelessness crisis in the city and that it should accommodate a diverse spectrum of needs. That said, she notes that the issue is of immediate concern.

The Rights of Pet Owners in Rentals

In a Tweet, Mayor Kennedy Stewart voiced his support for the decision, stating that "More than ever, pets are critical to so many renters' mental health [and] well being."

The motion, submitted by Councillor Swanson and Councillor Fry on behalf of the Renters Advisory Committee, calls for the prohibition of the "no pets" clause in rental contracts. It points out that British Columbians have been encouraged to stay home and practice physical distancing due to the COVID-19 pandemic, and that doing so is particularly difficult for seniors, under-housed individuals, and those who live alone.