Protestors say government inaction has led to an increase in personal and property crime rates, as well as public health hazards in the community.
Sep 29, 2020 2:11 PM By: Elana Shepert 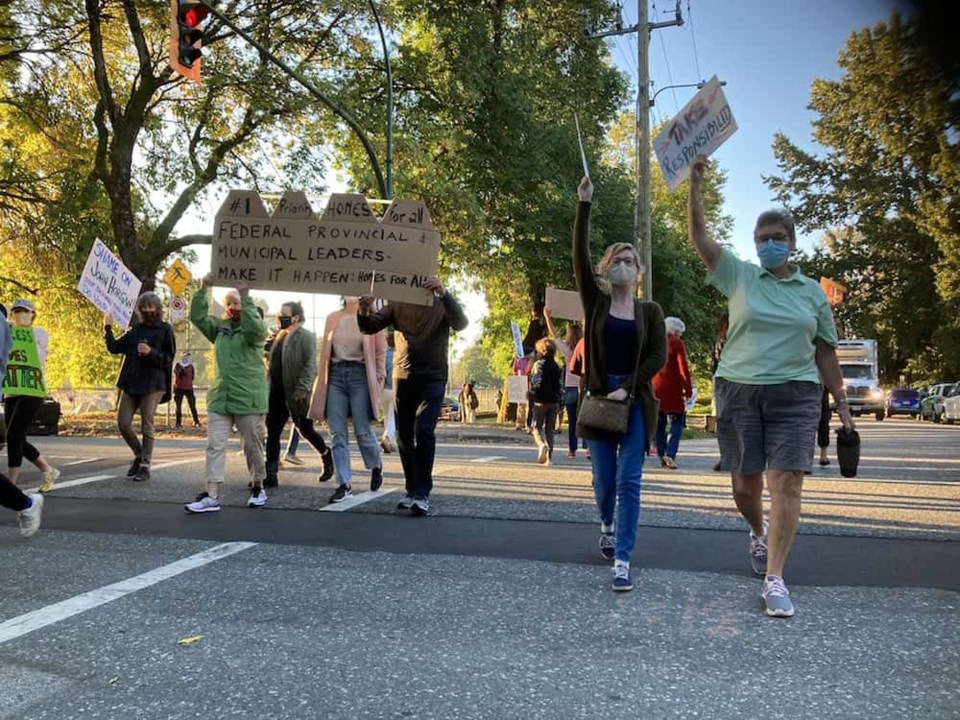 The protest commenced at approximately 7:30 a.m. on Prior Street in East Vancouver, where dozens of community members held signs that called for immediate government action.  Photo: @kelewis / Twitter

Dozens of Strathcona residents gathered Tuesday morning to protest the government's handling of a growing tent city of nearly 400 people in the neighbourhood's largest park.

A group called Safe Homes for All says that homeless people have been repeatedly displaced due to a lack of government action. It adds that this has led to an increase in personal and property crime rates, as well as public health hazards in the community.

"An unmanaged, unsupported encampment of 400 people is not safe for anyone - we demand immediate on-site consultation of people who are camping in Strathcona Park now," read a release from the organizers.

The protest commenced at approximately 7:30 a.m. on Prior Street in East Vancouver, where dozens of community members held signs that called for immediate government action.

Chrissy Brett, an organizer of the encampment - dubbed with a nod to Vancouver mayor Kennedy Stewart and Prime Minister Justin Trudeau as Kennedy Trudeau or KT Tent City, was arrested by Vancouver police during a counter-protest.

Back in June, Brett told Vancouver Is Awesome in a phone interview that the tent city near Crab Park was one of the few places homeless people could safely go without danger of daily street sweeps destroying or removing their belongings. After that encampment was dismantled due to a Supreme Court Injunction, many of its former residents came to Strathcona.

"I don't think there is a lot of critical thinking into where people would go into," said Castro. "Many of our people intentionally avoid SROs [single-room occupancies] because they can't be with their families and they don't have cooking facilities."

Castro added that many people are leaving government-run housing facilities and coming to the KT Tent City in order to have more autonomy in their daily lives and stay with their loved ones. She said that people are often separated from their families in temporary housing situations and that a "quick fix" won't solve this issue.

Here are some videos and photos from today's demonstration in Strathcona.

Mayor Stewart called an emergency meeting Sept. 11 to address the growing tent city, which has seen some Strathcona residents refuse to pay property taxes until safety is restored.

The Change.org petition launched in August, with Strathcona homeowners pledging to withhold tax payments until safety is restored for all residents of the community - including those who currently call the camp home.

Earlier this week a man, who had been harbouring a chainsaw, chased after Strathcona residents and threatening their lives Sunday night.

However, not all of the former Oppenheimer campers felt that the move served their best interests. A few of them stated that many homeless people have been negatively affected by the move, while others said they were bumped off the housing list.

V.I.A. has reached out to the Vancouver Police Department for comment and will update the story when more information becomes available.

- With a file from Megan Lalonde and Sarah Grochowski.

This new tent city emerged in a waterfront parking lot after Oppenheimer closed (PHOTOS)
May 15, 2020 10:03 PM

Residents of Vancouver neighbourhood refusing to pay property taxes until concerns regarding homeless camp addressed
Aug 14, 2020 2:07 PM
Comments
We welcome your feedback and encourage you to share your thoughts. We ask that you be respectful of others and their points of view, refrain from personal attacks and stay on topic. To learn about our commenting policies and how we moderate, please read our Community Guidelines.