Bobby Orr, Elias Pettersson, and when your sports heroes disappoint you 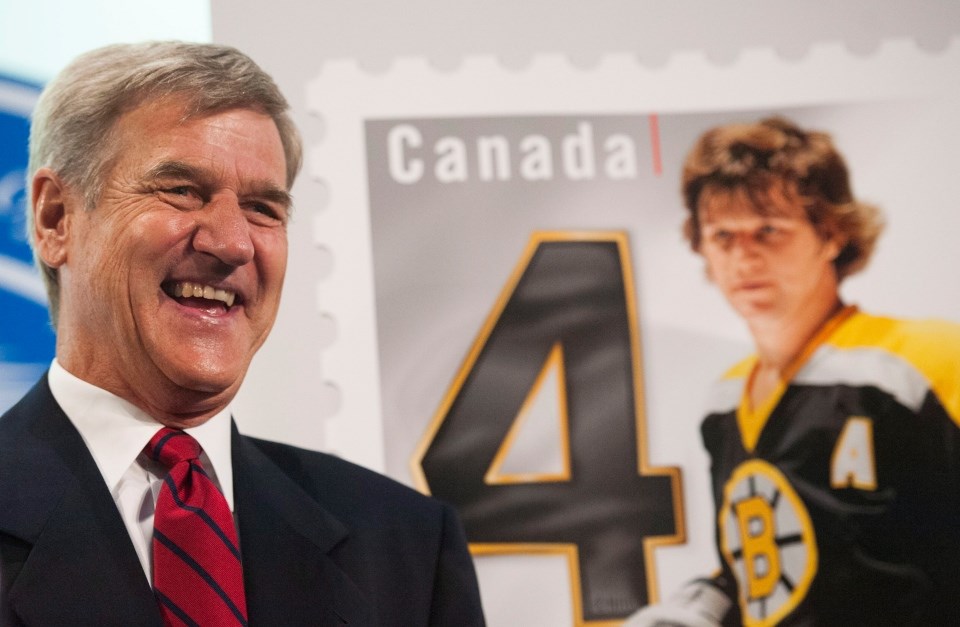 Bobby Orr stands beside his stamp during the unveiling of the NHL stamp series featuring the Original Six Defencemen at the Hockey Hall of Fame in Toronto on Thursday, Oct. 2, 2014. photo: Hannah Yoon, CP

A lot of hockey fans are loosening their grip on Bobby Orr right now.

One of the greatest hockey players of all time took a step into politics on Friday, taking out a full-page ad in the New Hampshire Union Leader to endorse Donald Trump for the 2020 US Presidential election.

Notably, Orr doesn’t reside in New Hampshire, but in Florida. Instead of taking out the ad in his home state or in Massachusetts, where he spent the bulk of his hockey career with the Boston Bruins, he took out the ad in a state with a closer battle that would still have plenty of nostalgic Bruins fans.

Orr joins other sports legends that have endorsed Trump in recent days like Jack Nicklaus and Brett Favre, though those endorsements came solely on social media, rather than a full page in a newspaper.

"President Trump has delivered for all the American people, regardless of race, gender, or station in life," says Orr in the ad, which includes a photo of Orr and his wife with Trump.

Certainly, LGBTQ people who have seen anti-discrimination protections pulled back under Trump might disagree with that statement. Supporters of the Black Lives Matter movement, which Trump has called “a symbol of hate,” would likely take issue with it as well.

Not that Bobby Orr will care, but his endorsement of Donald Trump is one of the most disappointing things I've ever read in my life.

I guess all I can say is that he seems to have a weak spot for conmen/future convicted criminals. pic.twitter.com/oQA5A6oClm

Bobby Orr is a white supremacist, pass it on https://t.co/r2nFGKdIAV

Let’s be honest: Orr’s support of Trump may be disappointing, but it isn’t surprising. For many reasons, the political beliefs of North American hockey players tend towards the conservative, right-wing end of the political spectrum.

Hockey is a sport primarily played by rich white people. The barriers to entry — particularly cost, but also time — mean that hockey is most easily accessed by those with the money and time to overcome those barriers. In the US and Canada, that mostly means rich white people due to systemic racism that has robbed people of colour of economic capital.

There are exceptions, of course, but the majority of the NHL is white and well off, which is the Trump supporter starter pack. The Republican policies of lower taxes for the affluent help the rich financially, while Trump’s rhetoric never targets them, so they’re safe from his vitriol.

In other words, Orr faces no harm from a Trump administration and is likely insulated from the harm that others have experienced. That doesn’t excuse his endorsement, but goes a long way towards explaining it.

For fans of his game-changing play on the ice, Orr’s support of Trump is intensely disappointing, particularly for fans that may already feel on the fringes of hockey culture, such as women, the queer community, and people of colour. Regrettably, that disappointment is a very familiar feeling.

Some Canucks fans were recently disappointed when Elias Pettersson went on the hockey podcast Spittin’ Chiclets. While it is one of the most popular hockey podcasts, it has a history of misogyny — hosts Paul Bissonnette and Ryan Whitney would refer to women they slept with as “kills.” Perhaps that shouldn’t be surprising given its association with Barstool Sports, long criticized for misogyny and sexism. Barstool Sports founder David Portnoy has a history of racist and sexist remarks.

Dani Huntley, co-host of The Broadscast, had a particularly strong reaction when it was announced Pettersson was appearing on Spittin’ Chiclets.

“It disappointed me he chose a platform that has a history of glorifying misogyny, whether it be referring to women as kills or bragging about their sexual exploits,” said Huntley. “Just listen to the Petey episode and how the Spittin' Chiclets crew made homophobic comments towards [J.D. Burke] before Petey joined the interview. That doesn’t sit right with me.”

Some suggested that Pettersson might not be familiar with the podcast’s problematic history and associations, but Huntley doesn’t buy that explanation.

“I think that when he has an agent and a PR team, he made a decision to go on,” she said. “He might not be directly partaking in the misogyny, but he is showing me he is complicit with it.”

“I used to listen to Spittin’ Chiclets, called myself a guy’s girl and I thought my white womanness made me immune to the patriarchy,” she said. “I had to reevaluate myself — I wasn’t being true to myself and was only doing this to try and fit in with the hockey crowd. I was enjoying my proximity to power, but our proximity doesn’t protect us. If there are 12 seats at the table and only two are for BIPOC and women, who are the people that are comfortable? The white men.”

Spittin’ Chiclets has had many NHL players on the podcast — it’s one of their main draws — and Pettersson isn’t even the first Canuck to go on the podcast. Bo Horvat previously went on the podcast earlier this year and the podcast has a reputation for getting NHL players to open up in a way they don’t elsewhere, perhaps because two former NHLers are the hosts.

According to Samantha Chang, one of Huntley’s co-hosts on the Broadscast, that’s part of the problem.

“I am disappointed that one of the primary sources to access players speaking candidly is unabashedly affiliated with a media platform that built its brand on misogyny, racism, homophobia and ableism, and which regularly encourages its supporters to dox and harass its critics,” said Chang. “In that sense, I am always disappointed when players and the NHL choose to partner with them.”

For a lot of hockey fans, these issues may not even register, a privilege that isn’t available to marginalized hockey fans, who have had to learn to compartmentalize when it comes to their favourite sport.

“That's a luxury that fans in underrepresented groups don't get,” said Chang. “For a lot of us, enjoying the sport requires us to ignore language and behaviour that is reductive of our existence and identity.”

That means compartmentalizing that disappointment in an off-ice decision and continuing to enjoy what Pettersson can do on the ice, while hoping for better choices in the future.

“At the end of the day, I'm still a fan, especially of Pettersson, especially on the ice,” said Chang. “It's simply not possible to otherwise enjoy this sport. I do hope that, for a player who is clearly keenly aware of his platform and influence, that he more carefully considers how he uses it.”

“I still think Pettersson is one of the best hockey players in the NHL. That will not change for me,” said Huntley. “I don’t think he is a bad person. I do question why he felt aligning himself with Spittin’ Chiclets, a Barstool company known for its culture problems, at a time when the NHL also has this problem, was good for his brand.”

Is that same compartmentalization available for fans of Orr? Pettersson going on a podcast is clearly a lesser offence than a full-throated endorsement of Trump. Perhaps, the latter is a bridge too far and will forever colour fans' memories of Orr’s brilliance on the ice.

Athletes, fans, and the limits of identifying with a team

We want our sports heroes to reflect who we are as sports fans, because fans identify with their team so strongly. Fans frequently use “we” when talking about their favourite team — “We’re going to win,” “We traded for Nate Schmidt,” “We need to get bigger and tougher” — and wear the jerseys of their team and favourite players. It becomes a shared identity.

In fact, since fans stay with a team long before and after players come and go, there's an argument to be made that the fans are the holders of the identity of the team, rather than the players.

There’s an element of tribalism in sports fandom. The Vancouver Canucks are not just a sports team that fans want to succeed: they represent Vancouver and they represent their fans. There’s an element of the evolutionary desire for survival in team spirit. When your team wins, you actually feel safer, because when your tribe wins, your brain associates that with a higher chance for success and survival.

Psychologists call it Basking In Reflected Glory. That’s why fans say “We won,” when, really, it was a group of athletes with no tangible connection to you. There’s a related theory, Cutting Off Reflected Failure, that talks about how fans disassociate from losing — “They lost” — but that’s a topic for another day.

When fans so strongly identify with a team, it’s understandable that they might hope the players on that team also identify with them and share similar views. When a player becomes so closely associated with a team, they become part of the cultural fabric of the city, such as we’ve seen with Trevor Linden and the Sedins. When the off-ice beliefs and viewpoints of those players clash with the identity of the city, it can be jarring.

The truth is that the players are individuals with different viewpoints. They’re not warriors representing your city; in most cases, they’re more akin to mercenaries. Meanwhile, a fanbase is also composed of individuals with widely disparate views, united only by one thing: a connection with a sports team.

While some Canucks fans felt disappointed by Pettersson going on Spittin' Chiclets, others had no issue with it or were happy to see him do so. The issue is that, like Orr is insulated from the harm caused by Trump, most hockey fans are insulated from the harm perpetuated by Barstool Sports. As a result, those who already feel marginalized by hockey culture once again feel unwelcome.

It’s impossible for a player to exactly share the views of an entire fanbase, but there is a lower bar that they can aim to clear to help those fans feel more welcome within hockey.

“I don’t necessarily wish athletes would share my views outside of sports,” said Huntley. “I do wish they would make an effort to be more inclusive for the fans who are paying and investing their time into them.”