The Canucks new goaltender isn't quite in Vancouver yet and neither are his tortoises.
Nov 18, 2020 4:09 PM By: Daniel Wagner 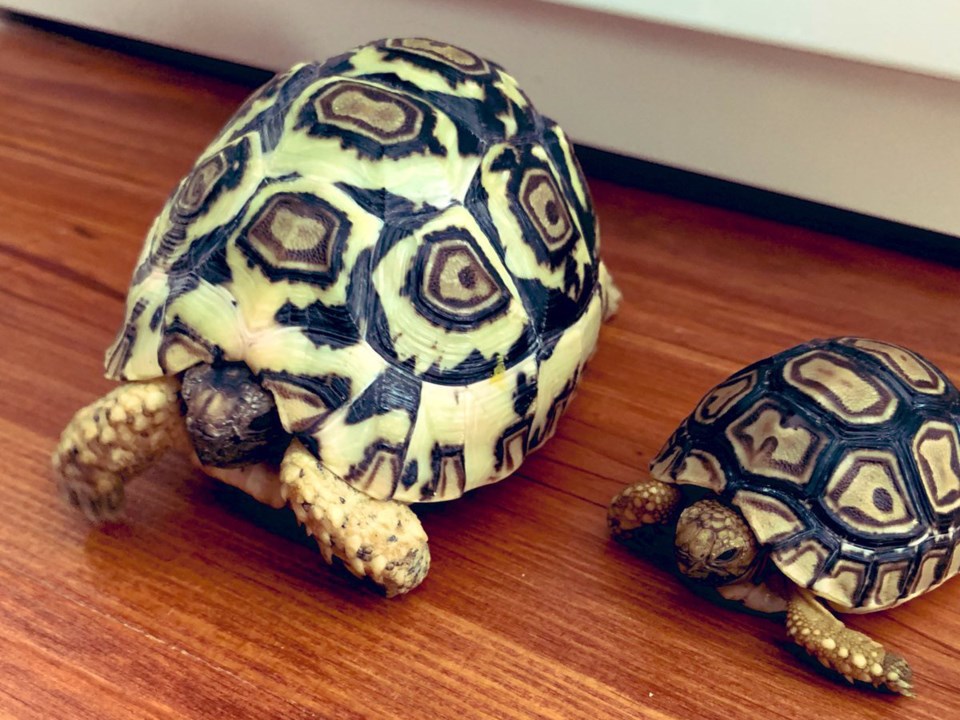 Nov 20, 2020 UPDATE: Thankfully, Braden Holtby and his two tortoises, Honey and Maple, were only stuck at the border for a couple of days before everything was sorted out with U.S. Fish and Wildlife. Holtby's wife, Brandi Holtby, gave everyone the good news on Twitter that he and the tortoises have finally crossed the border into Canada, slow and steady as is typical for tortoises.

Welcome to Canada, Honey and Maple! 🇨🇦 Huge shout out to @USFWS for working so hard for us! Thank you for everyone’s concern.. NOW you may laugh at the image of Braden being stuck at the border with a tortoise under each arm. 🐢👨🏽‍🌾🐢

Now Holtby can prepare for the upcoming Canucks season safe in the knowledge that his two leopard tortoises are safe and sound in Canada.

Braden Holtby can't enter Canada right now. For most Americans, that's not newsworthy, as the border between Canada and the US has been closed for months due to the COVID-19 pandemic.

For Holtby, however, he's allowed to enter Canada because he signed with the Canucks this offseason and needs to move to Vancouver ahead of the impending 2020-21 season. If the season is to start on January 1st as planned, training camps will need to open in early December, with players traveling from outside Canada likely needing to quarantine for two weeks ahead of time.

No, Holtby is stuck at the Canadian border for a much stranger reason: he doesn't have the right paperwork for his two pet tortoises.

While many Canucks players have pet dogs, their new goaltender and his family are instead tortoise people. Holtby and his family have two leopard tortoises, so named for the attractive yellow-and-black patterns on their shells that resemble that of the eponymous big cat. Their names are Honey and Maple and they are adorable.

We haven’t quite hit our goal of 25k meals for @foodbankmetrodc. BUT, I wanted to official introduce all of you to Maple Holtby, or as we like to call him, Mr. Mape. 🐢💚 pic.twitter.com/3X2wt5biKt

While tortoises can make lovely pets with their gentle nature, one of the troubles with tortoises is that they can carry serious diseases. That can lead to problems when importing and exporting tortoises, with different countries imposing various restrictions. Canada's restrictions for pets are relatively relaxed, but they still require an import permit for all turtles and tortoises.

That's what the Holtbys are facing now while trying to bring Honey and Maple with them to Vancouver. They did all the right paperwork for importing the tortoises to Canada, but missed a vital step: they also needed to apply for an export permit from the United States.

It's like some sort of shell game: they thought they knew which shell had the ball underneath, but it turned out there were two balls the entire time and one of them needed to be filed with the US Fish and Wildlife Service.

Holtby's wife, Brandi Holtby, tweeted out the dilemma on Wednesday morning, hoping that someone could help expedite the missing paperwork.

Hey Twitter, does anyone have any sweet connections with Federal Fish and Wildlife that could push some export papers along in order to get two happy tortoises across the border? 🇨🇦🐢🐢🇺🇸 We miss our boys!

Her initial tweet paints a picture of two tortoises stuck in quarantine alone at the border, which is sad. The true picture is a lot more amusing.

It turns out, Braden is also stuck at the border with the tortoises. He's minding those tortoises like he minds the net.

No, we didn’t know we needed an export permit (we did do the import permit for the Canadian side) so now Braden is stuck at the border with two tortoises 🙈

While tortoises aren't known for their speed, hopefully this situation can be resolved quickly. The Canucks will need their new goaltender and Holtby's family need their tortoises.

Until then, Holtby is stuck tortoise-sitting just outside of Canada.

Big brother, Honey, is taking over the family business. 🥅 pic.twitter.com/T3AVs0EbJ7

Nate Schmidt was goofy, charming, and loveable in his first media availability as a Canuck
Oct 13, 2020 6:06 PM
Comments
We welcome your feedback and encourage you to share your thoughts. We ask that you be respectful of others and their points of view, refrain from personal attacks and stay on topic. To learn about our commenting policies and how we moderate, please read our Community Guidelines.