Tanner Pearson out four weeks — what are the consequences? 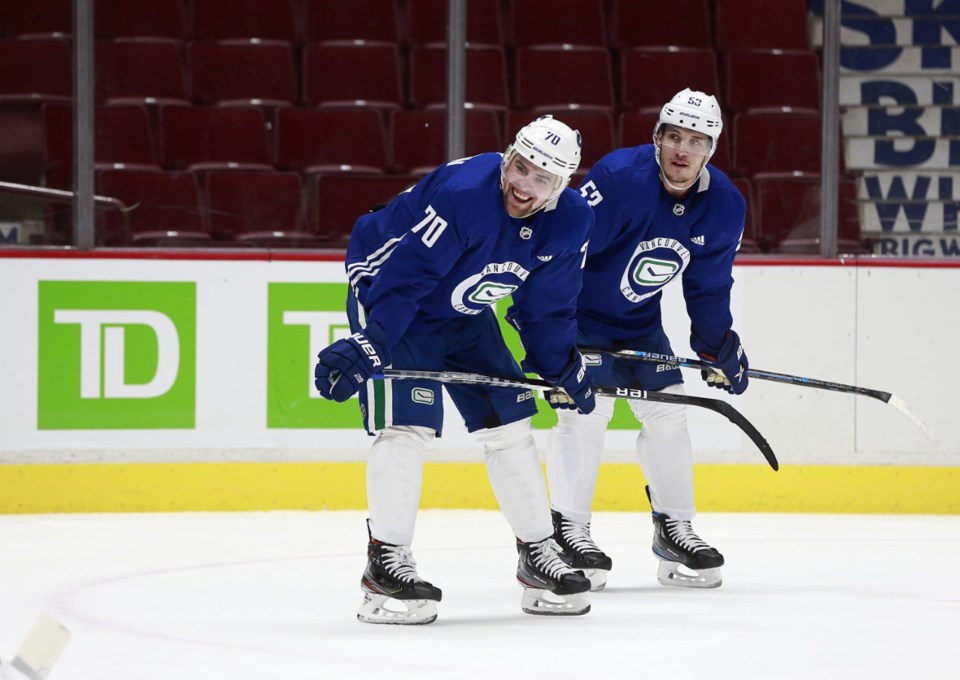 Tanner Pearson will be out at least four weeks with a lower body injury.Canucks / Twitter

Injuries are an inevitability in the NHL, even more so in the tightly-scheduled 2020-21 season, which sees teams frequently playing three games in four nights.

The Canucks are dealing with a slew of injuries at the moment, with Elias Pettersson out for an indeterminate amount of time, as well as Jay Beagle and Justin Bailey. Tyler Motte returned from a long injury on Wednesday, while Antoine Roussel is expected to return Friday night in Montreal.

With those returns, however, comes the news that Tanner Pearson will be out of the lineup for a significant amount of time.

Specifically, the injury is likely an ankle sprain, based on how he suffered the injury on Wednesday against the Ottawa Senators as well as the timeline. Pearson appeared to catch an edge while attempting to take a pass from Bo Horvat when he initially injured his ankle but tried to stay in the game, only to aggravate the injury in a later collision with Chris Tierney.

The injury has some immediate consequences for the Canucks lineup. Someone will need to play in Pearson’s spot on Bo Horvat’s wing, as well as take his place on the first power play unit.

“It’s unfortunate, for sure,” said Green about the injury. “But we’re going to worry about things we can control in our room. Whenever someone gets hurt, it’s a new opportunity for someone else.”

"A new opportunity for someone else."

The Canucks recent waiver wire claim has familiarity with J.T. Miller, so could play alongside Miller, bumping either Brock Boeser or Nils Höglander to Horvat’s wing, or could simply take Pearson’s spot and play with Horvat and Jake Virtanen. We won’t know the exact combination until the Canucks take the ice for warmup.

Vesey could also potentially step in on the power play, as he spent some time on the power play with the New York Rangers and has the size and finish to play a netfront role as Pearson was on the first unit. Alternatively, the Canucks could bump Höglander up to the first unit and use Vesey on the second unit.

The other possibility is that Motte gets a bigger role. With the Horvat line playing in a matchup role, Motte’s defensive game might be a fit and Green used Motte on the first power play unit on Wednesday after Pearson left the game.

“I know you guys haven't seen Motter on the power play much but he's actually a guy that can probably play there,” said Green on Wednesday. “He was the guy that we wanted to screen the goalie and get his nose dirty because we were gonna load up some one-timers from the side. Obviously it didn't work out, but that was our thinking behind it.”

The long-term consequences of Pearson’s injury might be even more troubling.

A four-week timeline means Pearson will return just after the trade deadline. Canucks GM Jim Benning has emphasized his desire to re-sign Pearson, but they’d likely be better off trading him to recoup some assets for the future.

Pearson’s injury could preclude that possibility. The Canucks should be sellers at the trade deadline barring a near-miraculous run, but the truth is that they don’t have much to sell. Pearson was one of their few pending free agents that could have netted a decent return, but teams will likely be gun shy to trade for a player still recovering from an injury.

On a Canucks team with limited winger depth, Jimmy Vesey could have an outsized opportunity
Mar 18, 2021 4:46 PM