The 1989-90 Vancouver Canucks were not a particularly good team. They finished dead last in the Campbell Conference with a 25-41-14 record and their leading scorer had just 57 points at the tail end of the highest-scoring era in NHL history.

Still, there was a glimmer of the great team that was to come.

Trevor Linden was solid in his sophomore season and showed the leadership qualities that would see him named a co-captain the following season. Greg Adams had 30 goals and meshed well with the young Linden. A young Kirk McLean was far from the problem in net, putting up a league-average save percentage in a league-leading 63 games. Jyrki Lumme arrived in a trade from the Montreal Canadiens and immediately put up 10 points in 11 games.

Most importantly, the Canucks had drafted a certain Russian Rocket in the sixth round of the 1989 NHL Entry Draft.

The building blocks of the 1994 Canucks that came a game away from the Stanley Cup were already there, put in place by general manager Pat Quinn. Despite missing the playoffs in two of his first three seasons with the Canucks, Quinn had plenty of supporters, one of whom wrote him a letter in the middle of that ugly 1989-90 season.

The letter Quinn wrote, dated February 27, 1990, was shared by the supporter’s grandson on Reddit on Friday, suggesting that the content of the letter fits the Canucks’ current situation as well. 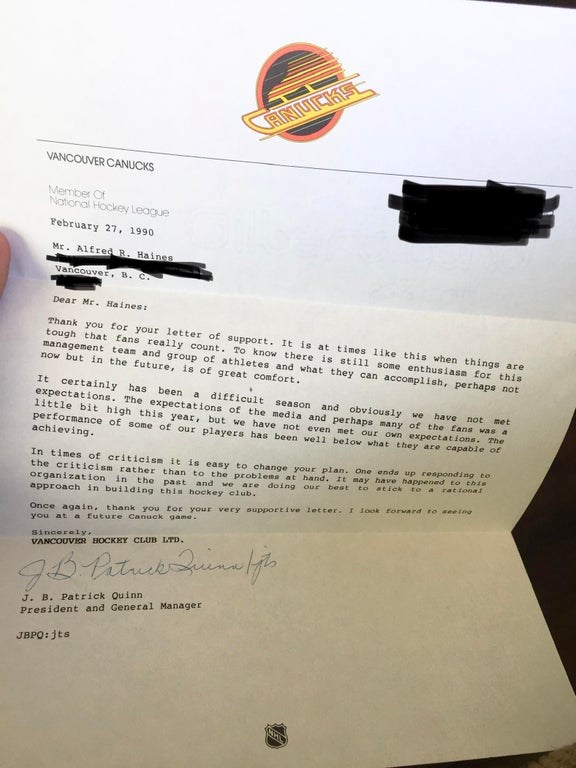 A letter from then-Canucks GM Pat Quinn from 1990. By r/OverLordJezus / Reddit

“It is at times like this when things are tough that fans really count,” reads the letter. “To know there is still some enthusiasm for this management team and group of athletes and what they can accomplish, perhaps not now but in the future, is of great comfort.”

The comparisons between the 1989-90 Canucks and the current team are readily apparent. Both teams were coming off making the playoffs in the previous season with high hopes for taking another step forward, but clearly took a step backward.

Instead of making excuses for the team’s poor performance, Quinn’s letter fully admits that the team fell short.

“It certainly has been a difficult season and obviously we have not met expectations,” said Quinn. “The expectations of the media and perhaps many of the fans was a little bit high this year, but we have not even met our own expectations. The performance of some of our players has been well below what they are capable of achieving.”

That kind of forthright admission would have been nice to hear from Benning at his press conference two weeks ago. The expectations were certainly high from some fans, though some in the media were less bullish about their playoff chances, but it would be nice to hear from the Canucks management that they also expect more out of their team.

To end his letter, Quinn focuses on the future and emphasizes how criticism won’t shake his resolve.

“In times of criticism it is easy to change your plan,” said Quinn. “One ends up responding to the criticism rather than to the problems at hand. It may have happened to this organization in the past and we are doing our best to stick to a rational approach in building this hockey club.”

That’s a message that Canucks fans would love to hear right now, that the team has a plan that they believe in and not just any plan, but a rational one committed to avoiding the mistakes of the past.

Quinn came achingly close to fulfilling his plan, building a hockey club that almost upset the powerhouse New York Rangers in the 1994 Stanley Cup Final. Canucks fans can only hope that the current Canucks follow a similar trajectory in the years to come.