Canucks rumoured to be interested in Oliver Ekman-Larsson; they shouldn’t be

With the entry draft a week away and the opening of free agency shortly after, the NHL is entering its silly season. This is the time when NHL general managers swing for the fences with big trades or sign big-name free agents to ludicrous contracts. All that activity means the rumour mill is more active than normal as well.

Some of the rumours that bounce around the hockey world aren’t worth the weight of the bits and bytes that form them, but when a well-connected reporter like Elliotte Friedman drops a rumour into his regular 31 Thoughts column, it’s worth sitting up and taking notice.

Friedman believes that “Arizona and Vancouver had an Oliver Ekman-Larsson conversation.”

Sure, that’s just a conversation, which could mean anything. Maybe Canucks GM Jim Benning called up Coyotes GM Bill Armstrong for a friendly chat — “Hi Bill, how’s the family? Great, and how’s Oliver? Still wants to be a cowboy?” — but a conversation about Ekman-Larsson, a player already rumoured to be on the trade market, can only be about one thing.

On the one hand, that’s good. It’s a GM’s job to make calls, kick tires, and be aware of the asking price for players around the league. If Benning didn’t inquire about Ekman-Larsson, he wouldn’t be doing his job.

The reasons to be interested in Ekman-Larsson are obvious. He’s a smooth-skating, 6’2” defenceman, who consistently puts up around 40 points per season, with a career-high 55 points in a dominant 2015-16 season where he led the Coyotes in scoring. You could even see on a surface level where he’d fit with the Canucks long-term: as the replacement for Alex Edler as the veteran minute-muncher on the left side after Edler’s contract expires next season.

Digging beneath the surface, however, the reasons to avoid Ekman-Larsson become apparent.

Ekman-Larsson is 29 and the typical NHL defenceman declines in effectiveness from around the age of 27 to 30. In all likelihood, Ekman-Larsson’s best days are behind him. That doesn’t mean he can’t be an effective NHL defenceman for years to come, but it is unlikely that he’ll remain a legitimate top-pairing defenceman.

That’s a problem, because Ekman-Larsson is signed for six more years at an average annual value of $8.25 million. That’s a hefty contract and one that makes acquiring Ekman-Larsson immediately unpalatable for the Canucks.

The Canucks are already slammed for cap space as they try to re-sign the likes of Jacob Markstrom, Tyler Toffoli, and Chris Tanev. They simply don’t have room for an $8.25 million Ekman-Larsson in the upcoming season without moving out a lot of salary.

That would mean trading Loui Eriksson and his $6 million contract, which would require retaining salary and a sweetener in the deal, if the Canucks are even able to find a team willing to take him. It would likely also mean sending a significant contract back in the trade; not a bad contract that the Canucks want to get rid of, but more likely a player like Brock Boeser.

What other option would there be? Ask the Coyotes to retain salary? The Coyotes are not going to trade their captain, who plays on their top pairing and quarterbacks their first power play unit, as a cap dump. They’re going to want a quality return. Asking them to retain a significant amount of salary would just raise the asking price.

The Canucks don’t have a first or second-round pick to offer in this year’s draft and really can’t be offering up too many high picks in the future either, as they’ll need to supplement their young core with more young, cost-controlled talent in the coming years. The assets it would take to acquire Ekman-Larsson just wouldn’t be worth it.

That’s not taking into account the ramifications of paying Ekman-Larsson $8.25 million per year for six more years. The Canucks have money coming off the books after next season, with contracts ending for Brandon Sutter, Alex Edler, Tanner Pearson, Jordie Benn, and Sven Baertschi, but they’ll also need new contracts for Elias Pettersson, Quinn Hughes, and Thatcher Demko.

The truth is, the money coming off the books will likely be entirely spent on Pettersson, Hughes, and Demko, and they’ll be worth it. It does mean, however, that the Canucks have to be careful about adding contracts that go beyond one year.

Beyond all those concerns, Ekman-Larsson just doesn’t make sense for the Canucks on the ice.

A large chunk of Ekman-Larsson’s production comes on the power play, where he’s been a mainstay on the Coyotes’ first unit. That opportunity won’t be available to him in Vancouver, where Quinn Hughes is clearly the best man for the job.

Over the past three seasons, Ekman-Larsson has averaged over three minutes per game on the power play. Edler and Tyler Myers, who each took turns on the second unit in Vancouver, averaged 1:11 and 1:19 per game last season. With Hughes and the first unit taking the bulk of the power play time, there wouldn’t be much left for Ekman-Larsson, which would cause his points to plummet.

Even that wouldn’t matter as much if he could help solidify the Canucks’ porous defence and provide some puck-movement in transition at even strength, but the numbers are not on his side there either.

Looking at Ekman-Larsson’s isolated impact heat maps from HockeyViz, which adjust for context like teammates, competition, and zone starts, we can see that Ekman-Larsson actually has a negative impact in the defensive zone. 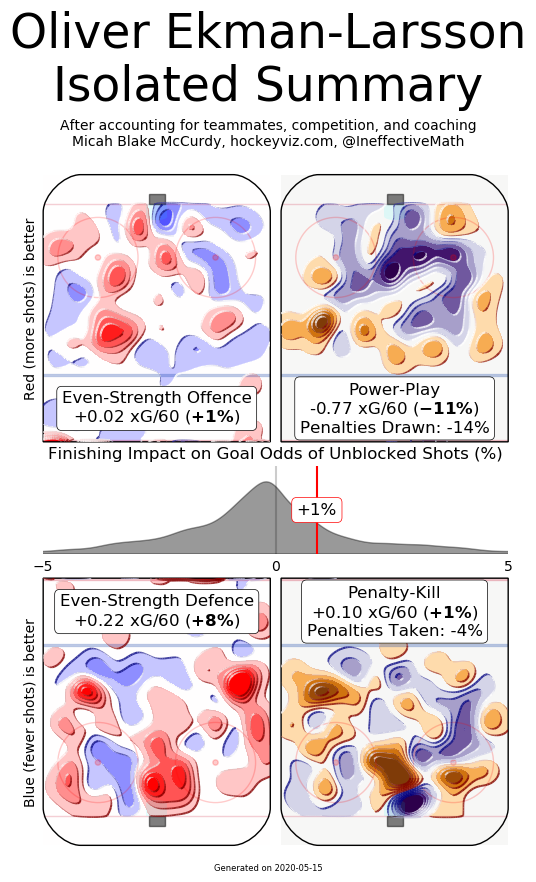 Essentially, shots against the Coyotes are 8% more dangerous than the NHL average with Ekman-Larsson on the ice. Offensively, he’s only slightly above NHL average in his impact and the Coyotes power play didn’t actually look all that good with him either.

Ekman-Larsson’s peak impact coincides with his dominant 55-point season, which also happens to be when he was 24, which many in the hockey analytics world peg as the peak age for most NHLers.

Ekman-Larsson’s play has been declining over the past few seasons, so there’s a real reason to be wary of acquiring him. Can he get back to his peak performance or are those days behind him? 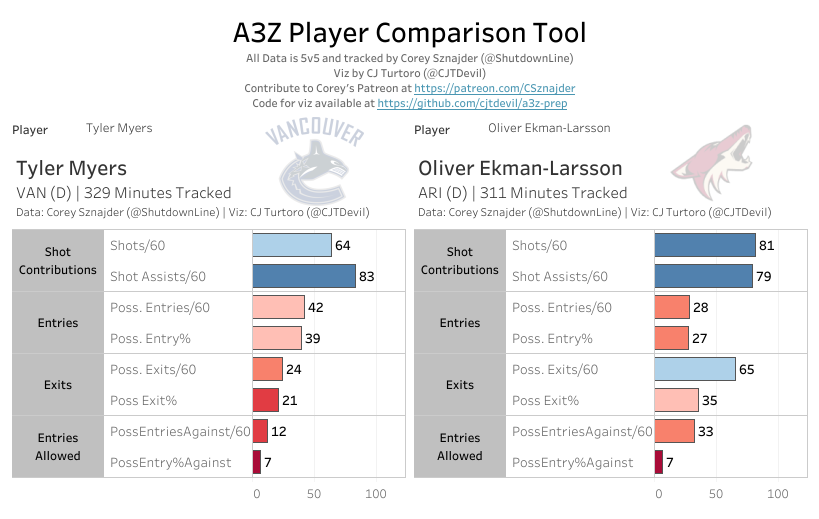 An even bigger issue is how permissive Ekman-Larsson is at his own blue line, allowing zone entries with possession far more than average.

When in the offensive zone, however, he contributes to a lot of shots for his team. In some ways, he has a similar profile to Tyler Myers, another ageing player on a long contract who is likely to get worse over time.

All of this paints a picture of a defenceman that may be able to put up points in big minutes with a lot of ice time, particularly on a first power play unit, but won’t necessarily improve a team significantly thanks to some lacklustre defence at even strength. Given his contract and where he would potentially fit on the team, there’s no way that he matches the Canucks needs, either now or in the future.

After winning a playoff round with a young core, the Flames and Oilers crashed and burned: how can the Canucks escape the same fate?
Sep 25, 2020 6:17 PM

REPORT: The Pittsburgh Penguins are interested in Chris Tanev in free agency
Sep 22, 2020 11:10 AM
Comments