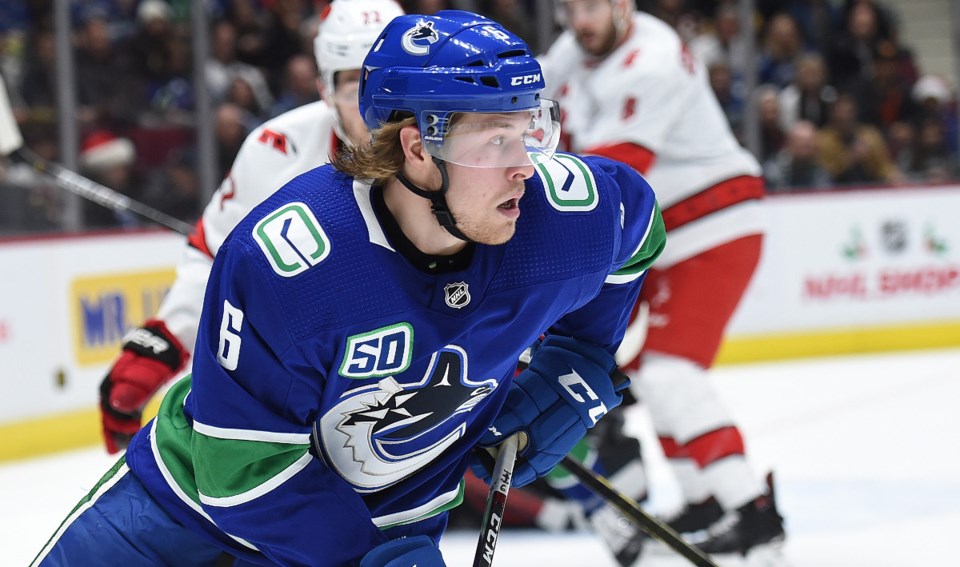 The Vancouver Canucks have a dilemma. They badly need to improve their defence, but they have limited resources to do so.

Acquiring a top-4 defenceman in free agency will be next to impossible, as the Canucks don’t have the cap space to spend big or, really, spend at all. The options that they might be able to afford won’t move the needle enough to really make a difference. They could try to promote from within, but banking on a prospect defenceman making the jump and immediately making an impact is a dicey proposition.

That leaves just one avenue available for improving the defence: a trade.

The question is, then, who do the Canucks have on their roster that could be traded for a legitimate top-four defenceman? Elias Pettersson is obviously untouchable, J.T. Miller isn’t going anywhere, and Bo Horvat is the captain. Do Tanner Pearson, Jake Virtanen, and Adam Gaudette have enough value to fetch a quality defenceman in return? I’m not so sure they do.

This is how rumours begin, sometimes: a little bit of logical deduction and a process of elimination. There’s a reason why, when the Canucks were rumoured to be interested in trading for Matt Dumba from the Minnesota Wild, eyes turned to Boeser. Unlike some of the other players on the Canucks roster, Boeser would have significant value on the trade market and is likely the only player on the roster that the Canucks might be willing to trade who could actually return a top-four defenceman.

That doesn’t mean Boeser will be traded, of course, just that it’s understandable why his name is circulating in the rumour mill.

For his part, Boeser isn’t paying much attention to those rumours.

“I haven’t heard too much, honestly. I don’t think I’m going to get traded,” said Boeser on a Zoom call with the media Thursday morning. “Obviously rumours are going to happen and stuff is going to be out in the media.”

It’s an unfortunate part of being a professional athlete, where your fate is not entirely in your control. Trade rumours are going to circulate, whether you like it or not. All Boeser can do is ignore the noise, focus on what he can control, and get ready for next season.

“I love Vancouver, I love the guys I play with, I love the organization, the fans. I want to be a Canuck,” said Boeser. “I think our team is right there and we can win a Stanley Cup in the next couple years. I truly believe that.”

That’s a confidence that has been seen from other young players on the Canucks, as the team clearly believes they’re on the brink of some serious success.

“So confident,” said Boeser when asked about his belief in the Canucks’ young core. “I think it’s eye-opening for all us young guys that we were right there. We’re a young group and just to be that close to the Conference Finals, it’s eye-opening.

To do that, Boeser will likely need to rebound offensively. His goal totals took a step back this season, as he scored just 16 goals in 57 games, far off the pace of his first two years in the league. That’s likely a source of the rumours as well, as the high expectations he set with his stellar rookie year have some fans disappointed now that he’s come back to earth.

Those little things include a heavy focus on his two-way game, where he made significant improvements away from the puck and in puck battles. That showed up in some stellar defensive numbers: he had the lowest rate of expected goals against on the Canucks, according to Natural Stat Trick. That does little to assuage the concerns of those who want more goals from the young sniper.

“Personally, I don’t think I’ve been shooting the puck as much and getting the looks that I got maybe earlier in my career,” said Boeser. “I definitely think I can continue to work on my shot and find ways to get to those areas to get those shots off.”

Although he didn’t get as many goals, Boeser still put up 45 points in 57 games, a 65-point pace over an 82-game schedule. That’s still solid production for a guy who just turned 23 during the season. As much as Boeser is one of the few players that could potentially return a top-four defenceman in a trade doesn’t mean this is the right time to trade the young winger. That’s a move that could quickly come back to bite the Canucks.

Manny Malhotra will leave the Canucks and join the Maple Leafs coaching staff
Sep 17, 2020 9:43 AM