What are the Canucks’ biggest needs at the 2020 NHL Entry Draft?

The Canucks will have just five picks in the 2020 NHL Entry Draft and some big holes to fill in their prospect pool.

The Canucks’ prospect pool took a significant hit this past season for a very good reason: Quinn Hughes and Thatcher Demko are no longer in it.

The top defenceman and goaltender from the Canucks’ prospect pool are now full-time NHLers. Hughes proved himself as one of the best young defencemen in the NHL, finishing second in the Calder Trophy race and setting a new playoff record for points from a rookie defenceman. Demko had a decent season backing up Jacob Markstrom, then put on a legendary performance to end the playoffs, stopping 122 of 125 shots across three starts and rattling the Vegas Golden Knights’ confidence in the process.

That massive gain for the main squad leaves the prospect pool a little depleted, however, especially when you add in the trade of the Canucks’ top centre prospect, Tyler Madden, to the Los Angeles Kings in the Tyler Toffoli deal. With the 2020 NHL Entry Draft coming up in just one week, it’s a good time to take stock of what’s remaining in the Canucks’ cupboards and what they might need to target at the draft.

There’s always an argument between drafting for need or just drafting the best player available, but the Canucks don’t have a first or second-round pick this year. By the time the Canucks make their first pick at 82nd overall, the differences between the available prospects become more granular. At that point, picking by position becomes defensible.

Let’s break the prospect pool down by position. Player names in bold on the below lists are signed to a contract with the Canucks or are pending restricted free agents that will presumably re-sign with the team. 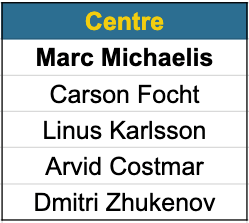 Starting at centre, we immediately run into trouble. The Canucks have a few centres in their system, but none that project as sure-fire NHLers, let alone as top-six forwards.

Marc Michaelis, a Hobey Baker finalist that the Canucks signed in March, is closest to the NHL. While Michaelis had a very productive four years in the NCAA, putting up 20 goals and 44 points in 31 games in his senior year, the red flag is that he’s already 25, the age at which prospects generally stop being considered prospects.

That said, there’s a chance Michaelis works out. He was a fantastic playmaker at the college level and has the work and defensive game to potentially find a spot in the bottom six in the future.

The problem is that Michaelis is the best centre in the system and there are only question marks after him. Arvid Costmar is the most skilled of the bunch, but faces long odds to make the NHL as an undersized pivot. Carson Focht couldn’t crack a point per game as an overager in the WHL, though he did score 32 goals. Linus Karlsson has been playing more on the right wing than centre and his skating makes him a long shot to make the NHL at either position, despite a strong finish to the season after a trade.

Dmitri Zhukenov only really shows up here by default. The Canucks still own his rights, but he’s unlikely to ever come over to North America. 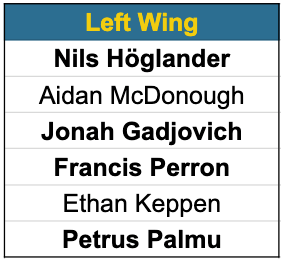 The Canucks have one Grade-A prospect on left wing, another with some intriguing potential, and handful of not a whole lot.

Höglander, the Canucks’ second-round pick from 2019, is looking like a steal. He had a solid SHL season for an 18 year old, with 16 points in 41 games, and was dominant at the 2020 World Junior Championships. He’s currently back in the SHL on loan with Rögle and already has 4 points in 2 games.

After that, there’s Aidan McDonough, who had a superb freshman season alongside former Canucks prospect Tyler Madden at Northeastern University, putting up 27 points in 31 games. After that, pickings get slim.

Jonah Gadjovich had a decent sophomore season in the AHL after struggling in his rookie year, but still looks like a longshot to make the NHL. Francis Perron regressed with the Utica Comets after the Canucks acquired him via trade and might not be re-signed. And Ethan Keppen took a step backwards in his post-draft year with just 29 points in 44 OHL games.

Finally, there’s Petrus Palmu, who had a pretty good season in Finland, but the relationship between Palmu and the Canucks has soured. I would be shocked if he returns to the Canucks’ organization. 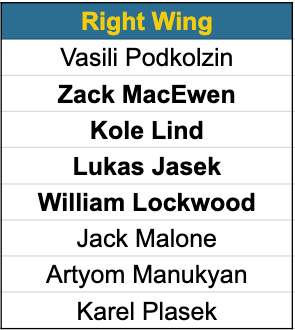 Right wing may be the Canucks’ strongest position in their prospect pool, featuring their top prospect, a physical winger on the verge of making the NHL full time, a developing agitator, and a couple of other prospects with potential.

Vasili Podkolzin is the Canucks’ most important prospect and arguably their only elite prospect, depending on how highly you view Höglander. The Canucks simply don’t have the dimension he could bring to the lineup as a two-way power forward that is dominant in puck possession.

Zack MacEwen had 5 goals in 17 games with the Canucks this season and played in 6 playoff games as well. He looks like he’s ready for a fourth-line role next season. Kole Lind bounced back from a disappointing rookie season in the AHL, posting 44 points in 61 games, demonstrating his playmaking and agitating in equal measure.

That’s a decent trio of prospects, all with solid NHL potential, albeit to different degrees. There’s some potential from the other right wingers in the system as well.

Will Lockwood, who signed with the Canucks in March, has struggled with injuries the last few years, but could play on a third or fourth line in the NHL. The Canucks have tried to move Lukas Jasek over to centre with limited success, but he has a decent two-way game. Jack Malone didn’t have a great freshman season, but that’s often the case with young freshman that don’t get much ice time; he still has some upside.

Karel Plasek and Artyom Manukyan? They're the longshots of the group. The two sixth-round picks were decent gambles in the last couple of drafts, but are unlikely to have an NHL future. 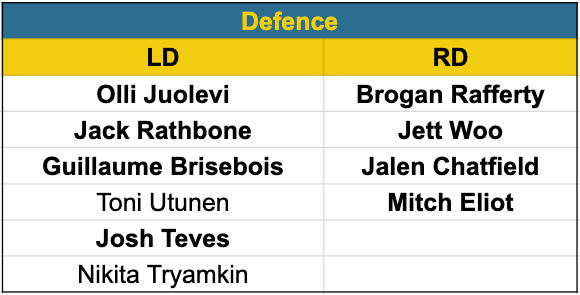 The Canucks have a couple of quality prospects on defence on both sides of the ice.

Olli Juolevi may be taking a slower road to the NHL than most of his peers in the 2016 draft, but it looks like he’s finally on the verge of breaking through to the NHL. He didn’t look out of place in his one playoff game with the Canucks and was productive with the Utica Comets. While his skating could hold him back from being the impact player the Canucks imagined when they drafted him 5th overall, he still looks like he could play on a bottom pairing in the NHL, at the very least.

Jack Rathbone might have an even higher ceiling than Juolevi. Scouts have raved about Rathbone and for good reason: his speed and skill make him a delight to watch and he put up 31 points in 28 games for Harvard, good for third in the NCAA in points per game.

That’s two solid prospects on the left side. The right side isn’t as strong, but Brogan Rafferty still has NHL potential after a dynamite rookie season in the AHL, putting up 45 points in 57 games. That was good for first among rookie defencemen and third among all AHL defencemen.

Jett Woo also has NHL upside, even if his game took a step back this past season in the WHL. He’s a good mix of old-school and new-school, throwing big, devastating hits on the defensive end, but also combining that with some skill and puck-moving ability.

After those four — none of whom, it should be said, are guaranteed to permanently make the NHL — there are some question marks.

Toni Utunen has some potential if his development breaks right. Guillaume Brisebois and Jalen Chatfield have been frequent call-ups to the Canucks, but mostly to sit in the press box and they have a much lower ceiling than the other four. Mitch Eliot and Josh Teves are not NHL-caliber defencemen.

Then there’s Nikita Tryamkin, who already has 79 NHL games under his belt. His game has regressed in the KHL over the last few years, however, and it’s questionable whether he’d even represent an upgrade for the Canucks. That said, he’s got 5 points in 10 games to start this season in the KHL, while averaging 23:19 per game. Maybe there’s still something there if he’s willing to come back to North America and maybe even spend some time with the Utica Comets. 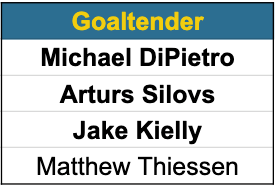 None of the Canucks’ goaltending prospects had a particularly good season, though they still have one solid prospect in net.

Michael DiPietro is clearly the Canucks’ best goaltending prospect after the graduation of Thatcher Demko. DiPietro isn’t the biggest goaltender, but has astounding athleticism and battles hard for every save. After a fantastic junior career, DiPietro struggled as a rookie in the AHL with a below-average .908 save percentage, but he still has the most upside in the system.

Arturs Silovs came over to the OHL after he was drafted by the Canucks last season and didn’t have a great year. He had an .891 save percentage, 17th among OHL goaltenders, though admittedly better than his backup. The Barrie Colts gave up a lot of shots in front of Silovs — he faced 40+ shots in 11 of his 36 starts — so perhaps their defensive porousness had something to do with his struggles.

Jake Kielly played most of the season in the ECHL and had an .887 save percentage, while Matthew Thiessen appeared in just one game for the University of Maine, playing 7 minutes and giving up 3 goals on 6 shots.

What the Canucks need most

As much as the Canucks have a trio of young centres at the NHL level in Elias Pettersson, Bo Horvat, and Adam Gaudette, centre is still their biggest area of need. Their prospect pool lacks even one high-end centre prospect, with 25-year-old Michaelis their best bet. Keep in mind, players drafted at centre often end up on the wing at the NHL level, so having a plethora of centres in the prospect pool isn’t a problem.

It would be particularly nice if the Canucks could replace overpaid bottom-six centres like Brandon Sutter and Jay Beagle with cheaper options from within, rather than signing more veterans in free agency.

The next biggest need is arguably in net. There’s no guarantee that DiPietro develops into an NHL goaltender and there isn’t much reason for optimism for the Canucks’ other goaltending prospects.

It’s likely the Canucks won’t have one of Markstrom or Demko in a year’s time, either from not re-signing Markstrom, making a trade, or losing one of them in the expansion draft. The Canucks could sign a veteran for short-term help, but it would be nice to have another goaltending lottery ticket in the system for the future.

The Canucks have at least two quality prospects at every position after centres and goaltenders: Höglander and McDonough on left wing, Podkolzin and Lind on right wing, Juolevi and Rathbone at left defence, and Rafferty and Woo at right defence. The system could certainly use more scoring wingers on the left side and more puck-moving defencemen on the right side, but that is true of a lot of prospect pools.

The Canucks don't have a lot of picks in the 2020 draft to replenish their prospect pool, however. They have no picks in the first two rounds and one pick per round after that. That's just five picks unless GM Jim Benning trades for more. Their amateur scouting staff might have to pull a miracle or two from out of their sleeves to find a couple of impact players in this year's draft.

The Prospector: Jack Rathbone is racking up points for Harvard without Adam Fox
Nov 19, 2019 9:33 AM