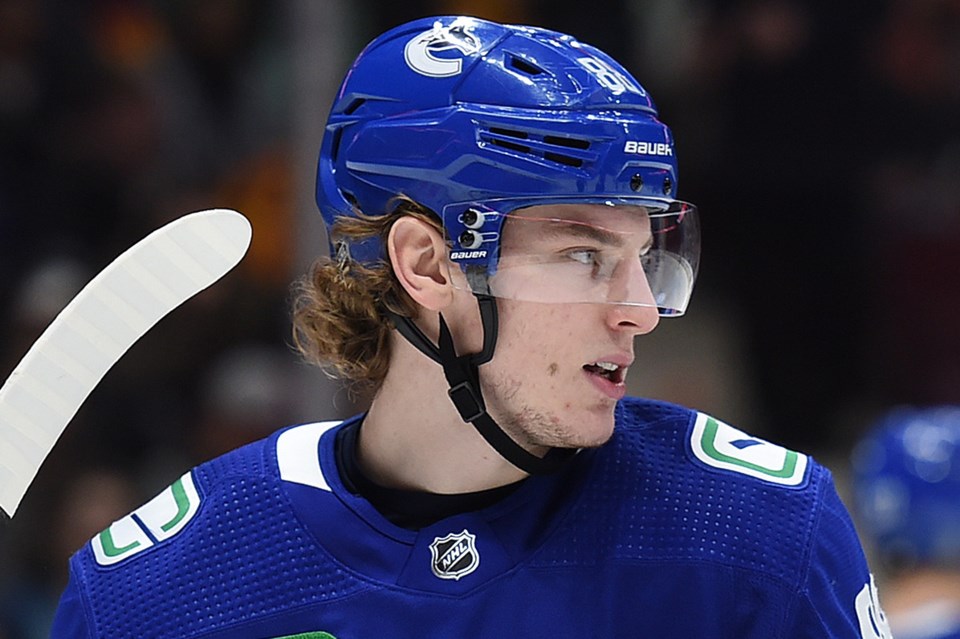 A second test has confirmed that Adam Gaudette of the Vancouver Canucks has COVID-19 and he has entered self-isolation according to the NHL's COVID protocol.Dan Toulgoet / Glacier Media

UPDATE: According to Elliotte Friedman and Frank Seravelli, tonight's game between the Vancouver Canucks and Calgary Flames has been cancelled.

There were no surprise absences at Wednesday’s morning skate for the Vancouver Canucks. 24 hours after Adam Gaudette was pulled off the ice in the middle of practice because of a positive COVID-19 test, the Canucks had a full slate of players running drills in preparation for the evening’s game against the Calgary Flames.

That’s assuming the game doesn’t get postponed and, at this point, there’s no indication it will be.

The Canucks received the results from Tuesday’s COVID-19 tests prior to practice, which means no one other than Gaudette tested positive. Jake Virtanen, absent from Tuesday’s practice due to “not feeling well,” was at Wednesday’s morning skate, suggesting that whatever symptoms he may have been feeling the previous day were unrelated to COVID-19.

“Adam Gaudette has been confirmed to be in COVID protocol,” said Green. “As far as our team, it’s been limited to one person, we’ve followed NHL protocol, and we’re getting ready to play a game tonight.”

That would suggest that none of Gaudette’s teammates have been identified as a “close contact” with Gaudette, despite the fact that almost all of them were on the ice with him at practice on Tuesday.

Green also wouldn’t confirm whether Gaudette’s positive case was a variant of COVID-19, as was the case for the Montreal Canadiens when Joel Armia tested positive, forcing the league to postpone four games.

J.T. Miller, who had to self-isolate to start the season due to being a close contact with Jordie Benn after he tested positive, was sympathetic to what Gaudette is going through.

“Having to sit out and be away from your team, especially in a hard time of the year, it’s not ideal,” said Miller. “Everybody’s just trying to do their best to make sure they’re following protocol and making sure we don’t spread it.”

It appears that the Canucks’ game against the Flames will go on as scheduled, though that was also the case for the Canadiens when they first got their results. There’s still a possibility that more information later in the day might change things.

“If something changes, I’m sure the players will be the first to know and the media will be next to know,” said Green, “but right now our whole focus is on this game tonight, which we feel is a big game against Calgary and I’m sure they feel the same way.”

Canucks and Flames have identical records

The Canucks and Flames are in a very similar position in the standings. Both teams have played the same number of games and have the exact same record at 16-18-3, four points behind the Montreal Canadiens for the fourth and final playoff spot in the North Division.

The biggest difference is that the Flames still have five games against the Canadiens in which they could make up ground; the Canucks don’t.

If the Canucks have any hope of a last dash to make the playoffs, they’ll need to win the vast majority of their remaining games, preferably in regulation. The odds are stacked against them, but according to Miller, that works in their favour to a certain degree.

“It’s like the pressure is kind of off us at this point,” he said. “The teams that are holding on for a spot probably have a little bit more pressure than we do.”

The weight of expectations the team had at the beginning of the season has been lifted. Perhaps without that pressure, they’ll now be able to actually live up to those expectations.

“With all the COVID talk and whatnot, I’d hate to see that get lost in this,” said Green. “It’s an amazing accomplishment.”

He’s only the fifth trainer in league history to reach 3000 games and has been with the Canucks since 1988, working All-Star Games, the World Cup, and the Olympics as well.

“It’s 33 years of working in the NHL, which is incredible,” said Green. “Just the fact that only five people have done it in his positions speaks a lot about Patty.”

The equipment manager is sometimes overlooked outside of the organization but never inside the organization, where their long hours and work for the team is greatly appreciated.

“It can’t be a job, you’ve got to love it, which I know he does,” said Green. “You’ve got to be great at what you do, which he is. And you’ve really got to be an amazing person to survive that long and be in that kind of position when you’re dealing with athletes that can be a little bit picky. He’s that as well,  he might be a better person than he is a trainer, which says an awful lot about him.

“I’m proud of him, I think it’s a great accomplishment, and our organization’s lucky to have him.”