Alex Edler and Nate Schmidt have been one of the best defence pairings in the NHL.
Feb 19, 2021 3:43 PM By: Daniel Wagner 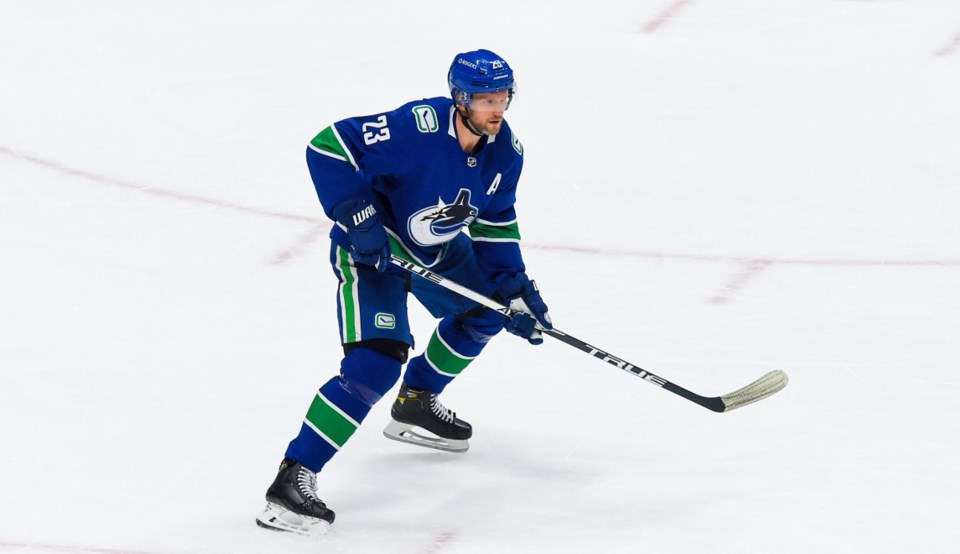 At the age of 34, Alex Edler is quietly having one of the best seasons of his career.Bob Kronbauer / Vancouver is Awesome

Through the first 15 games of the season, the Vancouver Canucks were bleeding shots against.

They gave up 46 shots on goal to the Edmonton Oilers in their second game of the season. A few games later, they gave up 42 to the Montreal Canadiens. A few games after that, it was 43 shots to the Ottawa Senators.

The Canucks were averaging 35.7 shots against per game, easily the most in the NHL by nearly two shots per game.

Over the last five games, however, the Canucks have suddenly locked things down defensively, ever since allowing just 19 shots in their February 8th game against the Toronto Maple Leafs. In those five games, they’ve averaged just 25.4 shots against per game, and even that is skewed upwards by giving up 36 shots in their last game against the Calgary Flames, when they took an early lead and the Flames were pushing hard all game to come back.

That average of 25.4 shots against per game would actually rank first in the NHL this season. So how did the Canucks go from one of the most porous defensive teams in the league to suddenly one of the most stingy?

There are several factors that go into it. With a little more practice time, they’ve been able to make adjustments to their system, such as keeping their third forward higher in the zone on the forecheck and effectively funnelling the puck carrier to that area. Also, their forwards and defencemen are playing tighter together as a unit in the neutral zone, giving the opposition less room to maneuver. In addition, their breakout has been cleaner, with quick puck movement and better support from their forwards.

One simple aspect that has helped a lot, however, is that they’ve landed on some defence pairings that work effectively together.

"Both partners are bringing something to the table."

Alex Edler and Nate Schmidt have been the primary shutdown pair, matched up against top lines. Quinn Hughes has formed a steady partnership with Jordie Benn, while rookie Olli Juolevi has been paired with veteran Tyler Myers.

While those pairings had appeared previously in the season, they all came together at the same time heading into that February 8th game against the Leafs.

Jalen Chatfield, who had been playing with Edler, came out of the lineup after an ugly game. That reunited Edler with Schmidt, a pairing that looked good together earlier in the season. In place of Chatfield, Juolevi came back into the lineup after he was a healthy scratch and quickly showed that he had taken a step forward defensively with extra practice time.

Each of the three pairings has found chemistry that has helped the whole be more than the sum of their parts. A defence that looks sub-par on paper might be better than expected.

“Whenever you have a partnership that you like that is playing well together, it’s usually because both partners are bringing something to the table,” said head coach Travis Green.

The biggest impact has been reuniting Edler with Schmidt. The two have faced tough competition all season and have put up elite results in their underlying numbers. Of the defence pairings in the NHL that have played at least 100 minutes together at 5-on-5, Edler and Schmidt have been the best pairing in the league at tilting shots on goal in the right direction.

The Canucks have out-shot their opposition 96-to-55 with Edler and Schmidt on the ice at 5-on-5, controlling 63.58% of the shots on goal. That’s particularly impressive when you consider some of those minutes came earlier in the season when the Canucks were getting cratered at 5-on-5.

In fact, when it comes to expected goals — a metric that combines shot quality and quantity — Edler is having the best season of his career, controlling 54.20% of the expected goals when he’s on the ice at 5-on-5. That’s better than even his best seasons when playing with the Sedins.

He’s doing that while still facing top lines more than any other defenceman on the ice and with some significant time spent with a rookie in Chatfield.

“I just think he’s playing well,” said Green. “I mean, Eddy’s been a great defenceman for us for a long time, he’s used to getting those tough assignments. We’ve tried to keep his minutes a little bit down by not putting him on the power play and he looks fresh. He’s smart, he’s been physical — he’s having a good year.”

It helps that he’s been paired with a defence partner that is an excellent puck-mover, a part of Edler’s game that has suffered in recent years. Schmidt’s mobility and passing has proved an excellent complement to Edler’s intelligence and in-zone defence.

“I think they’ve had real good communication,” said Green. “They like playing with each other, I think they like the assignments they’ve had. The fit kinda works. We tried it originally at the beginning of the year, it wasn’t that we didn’t like it, we just wanted to get Chatfield into some games and with the hand combos, we had to change the pairings.”

"This is the best I've seen him play."

Green’s comment on handedness is intriguing, because the Canucks’ current pairings feature two defencemen playing on their off-side: Schmidt and Benn, both left-handed shots playing on the right side.

That’s something Green has generally tried to avoid, but he laughed when asked about moving away from his “trademark” emphasis on handedness.

“I think the so-called ‘trademark’ is a little bit overplayed, to be honest,” he said. “I think just the way our defencemen that we’ve had have been set up, I’ve played righty-lefties. It’s not a lot of times that you get guys that can play their off-side, to be honest. There’s a lot of guys that we’ve had over the years and that we still have, if I asked them to play their off-side, they’re probably not going to want to and they’re not going to be very comfortable.”

Last season, however, Benn played primarily on the left and struggled. No Canucks defenceman was out-shot more when he was on the ice at 5-on-5 last season than Benn.

On the right side with Hughes this season, it’s like Benn is a different player.

“I think this is the best I’ve seen him play,” said Green. “I can’t say he plays better on one side or the other, but this is the best he’s played. He’s playing with a pretty good partner too, I think Quinn’s helped him, he’s helped Quinn.”

It certainly helps that Benn is playing with an elite offensive talent like Hughes, but, as Green said about good pairings, Benn is bringing something to the table as well. Part of it is his steady defensive game, but he also adds something to the breakout that has helped Hughes.

It’s made a difference for Hughes this season. With Benn, Hughes has a 50.40% expected goals — not spectacular, but solid, especially since they play a decent amount against top lines, if not as much as Edler and Schmidt.

Without Benn, Hughes has a 39.65% expected goals, as his various other partnerships with Travis Hamonic, Tyler Myers, and Nate Schmidt really haven’t worked. It’s shown up in the actual goals as well: Hughes has been out-scored 17-to-8 without Benn on his right side, the source of his team-worst minus-12 plus-minus. With Benn, goals are 10-to-10 at 5-on-5.

Finally, there’s the bottom pairing of Juolevi and Myers. Juolevi’s development defensively has provided an important safety valve for Myers, allowing him to be more aggressive in the neutral zone, such as when he scored the game-winning goal against the Calgary Flames last Saturday.

Barely seen in the background on that goal was Juolevi, dutifully backing up Myers as he made the aggressive neutral zone pinch to turn the puck over.

“I think Olli’s come back and his game looks sharper, more confident,” said Green. “Myers and him have been a good pairing.”

With Juolevi and Myers on the ice at 5-on-5, the Canucks have out-shot their opposition 62-to-58 — not an enormous edge, but still solid for a third pairing. Their numbers together were better until Wednesday’s game against the Flames, where they were trapped on the ice for some long shifts in the defensive zone with the fourth line. Even still, they didn’t surrender a goal.

“I think [our pairing’s] been good,” said Juolevi. “We can both move the puck well and of course Mysie is a good, big guy and skates really well. I’ve liked it so far and I think we’ve done good stuff and haven’t allowed too many goals, which is a big thing, of course.”

Juolevi and Myers have been on the ice for just three goals against at 5-on-5 in over 111 minutes together, the fewest of any Canucks pairing that’s been together for at least 30 minutes this season. You can’t hope for much more from your bottom pairing.

There’s just one caveat to all of this. Four of the last five games have been against the Calgary Flames, a team that’s averaging 28.6 shots per game, sixth lowest in the NHL. Can these defence pairings hold down the fort against teams with a more high-flying offence like the Montreal Canadiens and Edmonton Oilers? That remains to be seen.

Until then, Green summed things up succinctly.

“I like the way the pairings look right now,” he said.

A healthy Olli Juolevi is making an impact defensively for the Vancouver Canucks
Feb 17, 2021 3:55 PM