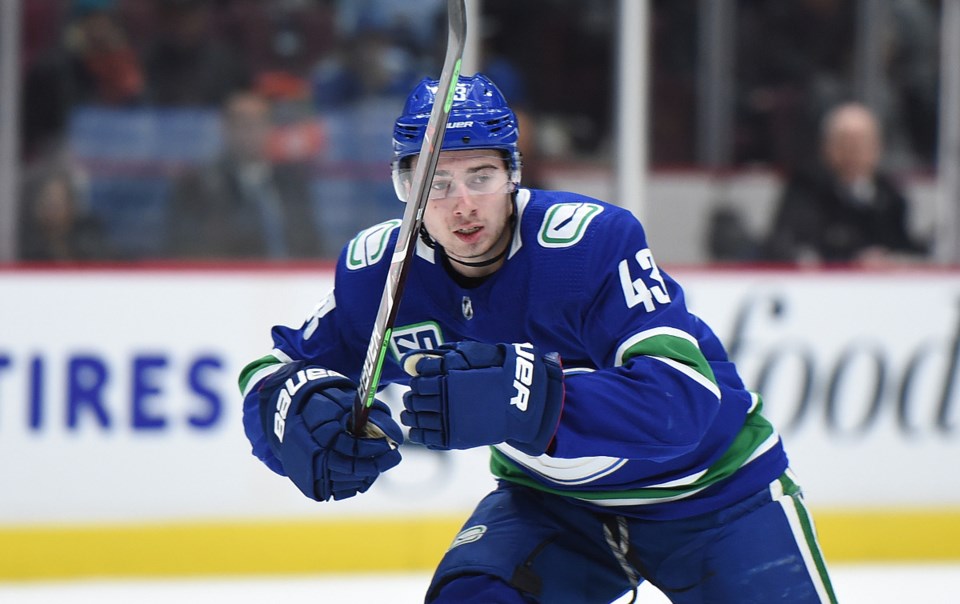 Quinn Hughes has played regular shifts with all three of the Canucks' right-side defencemen this season. photo: Dan Toulgoet

Quinn Hughes spent his rookie season with a savvy veteran at his side both on and off the ice. Chris Tanev not only provided steady, stay-at-home defence behind Hughes’s thrilling offensive rushes, but also provided home-cooked meals and games of chess for the young rookie, who described Tanev and his fiancée, Kendra, as “a great support system.”

When Tanev signed with the Calgary Flames in the offseason, Hughes lost that support system, but perhaps he was already prepared to leave the nest. In any case, dropping by the Tanev house for a home-cooked meal during a global pandemic wasn’t going to be possible this season.

On the ice, Tanev’s absence meant a big change for Hughes heading into this season. Who would he play with? For a while, it seemed like the options were limited to Tyler Myers or the newly-acquired Nate Schmidt. Then the Canucks signed Travis Hamonic and it quickly became evident that he would be the new partner for Hughes.

Only, that’s not quite how it’s worked out to start the season. Rather than picking one of the team’s three right-side defencemen to play with the young phenom, head coach Travis Green and defence coach Nolan Baumgartner have partnered Hughes with all three of them at different times.

“If you look around the league and see defenceman that play 24 to north of 24 minutes, they’re gonna play with different players,” said Green. “You’re not usually just going to have a guy with the same partner if he’s playing that many minutes.”

It has quickly become clear that Hughes is going to play a ton of minutes this season. After finishing second on the Canucks in average ice time last season with 21:53 per game, Hughes is leading the Canucks by a wide margin with 23:49 per game. In two of the Canucks’ four games, Hughes has played over 26 minutes.

The only thing keeping that number from climbing higher is that, unlike many other number one defencemen in the NHL, Hughes doesn’t play on the penalty kill. Given how the penalty kill has performed to start the season, maybe he should.

What’s interesting is the situations in which Hughes has played with Schmidt and Myers.

All four games, Hughes has started with Hamonic. It’s his neutral ground. Hamonic is billed as a shutdown defenceman, so theoretically plays the same role for Hughes as Tanev did: a safety net for his more aggressive forays up ice.

"I think [that pairing's] been okay," said Green. "Keeping in mind that [Hamonic] hasn't had a training camp and he's probably still finding his best game as well, I think he's been pretty good. For not having a camp and being on a new team...he's been good."

That’s not exactly how they’re being deployed this season. While Hughes and Myers have been paired together primarily when trailing this season, they’ve essentially just played a regular shift, no more skewed to the offensive zone than Hughes’s regular shifts with Hamonic.

It hasn’t just been when the team is trailing either. For instance, in the first game of the season Hughes and Schmidt took to the ice for two shifts when the score was still tied 0-0. They even played a few shifts together when the Canucks had the lead.

What also intriguing is the forwards they’re on the ice with: primarily the top line with Elias Pettersson, but occasionally Bo Horvat’s line or, when the team was really desperate, Pettersson, Horvat, and Brock Boeser all at once.

The purpose behind the usage

Here’s what it seems the Canucks are doing. Hughes and Schmidt are being used together in very specific circumstances: offensive zone faceoffs or possessions when they can be deployed with the team’s top offensive forwards, no matter the score. They don’t want to play Hughes and Schmidt together all the time — it’s arguably better to spread out their puck-movers — but still want to take advantage of their offensive abilities together.

For Hughes and Myers, on the other hand, it’s more about double-shifting Hughes and getting him more ice time, particularly when the team is trailing. Unlike with Schmidt, Hughes and Myers have only been deployed when trailing.

This is also a case of sheltering Olli Juolevi, who’s averaging just over 10 minutes of ice time per game. Hughes’s minutes with Myers have come at the expense of Juolevi, but have also avoided putting Juolevi up against tough competition when the Canucks are already trailing.

Canucks fans are likely to see Hughes play shifts with all three defencemen throughout the season, depending on the situation.

“It's just trying to coach to win, trying to find places where you can put Quinn out there to give us an advantage,” said Green. “You’ll probably see that a lot with Quinn.”