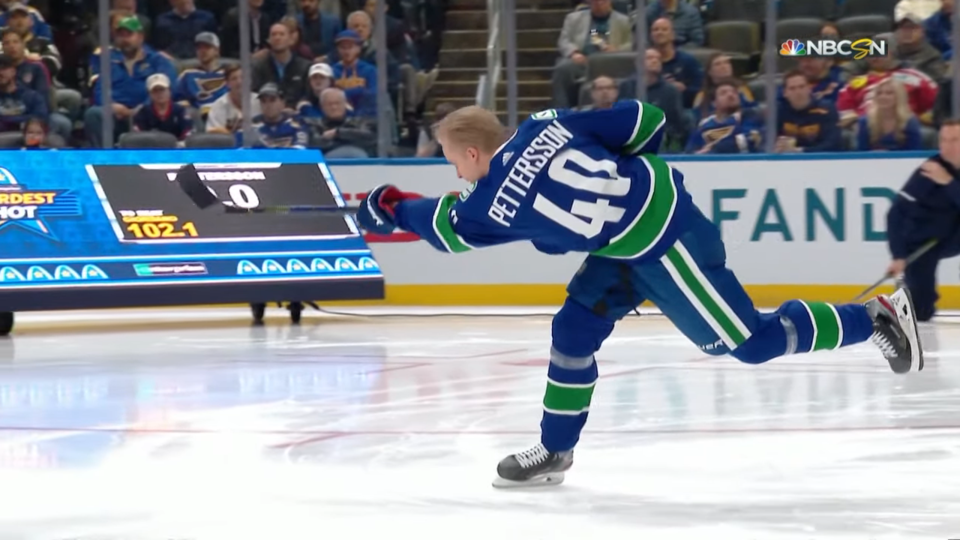 Elias Pettersson shot the puck so hard, he could barely believe it himself.

The Canucks’ franchise centre was the lone forward in the Hardest Shot event at the 2020 NHL All Star Skills Competition. It’s an event typically dominated by big, strapping defenceman that are known for taking slap shots from the point.

That’s not Pettersson. The skilled Swede was easily the lightest of the six competitors. In fact, he’s the only one listed at under 200 lbs, weighing in at a wispy 176 lbs. That’s a full 54 lbs lighter than the heaviest competitor, Shea Weber.

Pettersson proved that a hard shot isn’t all about weight; it’s about technique, and Pettersson’s is flawless.

Shooting fourth in the competition, the mark to beat was 102.1 mph, set by both Mark Giordano and Victor Hedman before him. Pettersson stepped up to the plate and stepped into the lead: his first shot was 102.4 mph, an absolute rocket that shocked the crowd, impressed the gathered stars, and surprised Pettersson.

The shot was even more impressive than you might think. While plenty of defencemen have shot the puck over 102.4 mph at the All Star Skills Competition, just one forward has done so.

Just three forwards have ever won the Hardest Shot competition and one of them, Sergei Federov, even spent some time as a defenceman. The hardest shot by a forward to win the event came from Fredrik Modin, who hit 102.1 mph back in 2001.

Pettersson beat Modin, but one other forward has hit a higher mark: Steven Stamkos. The Lightning captain reached a stunning 103.9 mph back in 2016, but fell short of Shea Weber, who crushed the competition with a 108.1 mph blast.

That means Pettersson has the second-hardest shot ever from a forward at the NHL All Star Skills Competition. That’s quite the feat for player in just his second season in the NHL.

Pettersson showed it wasn’t a fluke by breaching 100 mph with his second shot as well, reaching 100.3 mph.

Every shot over 100 mph earned a $5000 donation to the player’s chosen charity. For Pettersson, that was the Parkinson Society’s of British Columbia and Minnesota, which will split $10,000 total for Pettersson’s two shots above the century mark. Brock Boeser, Pettersson’s teammate and friend, is of course from Minnesota and his father Duke Boeser, was diagnosed with Parkinson’s disease when Brock was in Grade 7.

Even though Pettersson didn’t win the event, he still proved his mettle. And, since most of his slap shots come from a lot closer to the net than a defenceman’s, goaltenders should still be shaking in their skates.

Meanwhile, Jacob Markstrom provided some memorable moments of his own.

Markstrom was mic’d up for the Save Streak event, with Kevin Bieksa chatting in his ear the entire time. Perhaps that’s why he had trouble keeping the puck out. At one point, Roman Josi utterly fooled Markstrom, whipping a quick wrist shot past him.

Seemingly forgetting he was on a live mic, Markstrom good-naturedly said to Josi, “Ah f*** off.”

#NHLAllStar #Canucks Markstrom is pissed that Josi broke his save streak pic.twitter.com/NaGwTl2cmX

The f-bomb seemingly went unnoticed by the broadcast crew, whose ears have been well-trained to gloss over such language at the rink.

While Markstrom didn’t come close to winning the Save Streak event, he came away a winner in another way. Bieksa made a bet with Markstrom, promising him $100 cash if he could come up with a five-save streak.

Markstrom took Bieksa’s bet, then took Bieksa’s money, as he hit five saves before promptly giving up a goal. Bieksa was good to his word and gave him the $100, which Markstrom promptly distributed to some of the players’ kids that were at the event, handing it out in $20 increments.

The other Canuck at the event, Quinn Hughes, came up short in the Fastest Skater event. Hughes is the only rookie at All Star Weekend and perhaps had no choice in his event; that tends to be the case for rookies.

Hughes may be an elite skater, but his skills lean more in the direction of maneuverability, agility, and edgework, not straight-ahead speed. His time of 14.263 is a fine time, but it didn’t hold a candle to the fastest skaters in the competition and he finished last among the eight competitors.

Connor McDavid, however, was dethroned as the fastest skater. The Oilers’ captain has won the event three years in a row, but Mathew Barzal set a blazing pace in his run, finishing his lap of the rink in 13.175 seconds. McDavid couldn’t quite match it, finishing just 0.04 seconds behind at 13.215 seconds.

Barzal’s time is just 0.003 seconds behind the fastest time ever, that of Dylan Larkin in 2016. Larkin, however, had a running start, taking off well behind the starting line.

The highlight of the Skills Competition, however, was an entirely new event. No, not the Shooting Stars event, where players shot the puck into targets from the stands. That was largely a bust, marred by one of the biggest targets being worth the most points. That removed all strategy from the event and just meant watching players miss a big target for an agonizingly long time.

No, the new event that took off was the Elite Women’s 3-on-3 game, which had a rare thing for the NHL All Star Weekend: effort. The two teams, split into Canadian and American sides, played like there were real stakes involved and, for them, there were.

Not only was this another chapter in the Canada/USA rivalry, but an opportunity to showcase the women’s game in front of a large audience. It was exciting, with the players pulling out some stunning moves to try to score, but Canadian goaltender Ann-Renee Desbiens stole the show by stealing the game.

Desbiens made 15 saves on 16 shots in the two-period, 20-minute game. She was particularly impressive in the first period, as the Americans peppered her with 11 shots and she stopped every one.

The NHL’s All-Star Weekend doesn’t always feature all the elements of hockey, such as defensive effort, physical play, board battles, and speed. The Elite Women’s 3-on-3 game featured all of the above, providing a great showcase not just for women’s hockey, but the game of hockey as a whole.

Quinn Hughes earns bragging rights as first Hughes brother to go to the All-Star Game
Jan 11, 2020 11:02 AM
Comments
We welcome your feedback and encourage you to share your thoughts. We ask that you be respectful of others and their points of view, refrain from personal attacks and stay on topic. To learn about our commenting policies and how we moderate, please read our Community Guidelines.