One thing sets Pettersson apart from the other stars for Canadian teams.

One of the most intriguing aspects of the 2020-21 NHL season is the all-Canadian North Division. While it was created purely out of necessity with the U.S.-Canada border still closed, it should create some fantastic rivalries, with the Vancouver Canucks facing every other Canadian team at least nine times during the regular season.

The evergreen debate of who is the best team in Canada won’t be academic this season: it will be solved on the ice, so it’s not just the playoffs on the line, but also bragging rights for each fanbase.

Already, preseason power rankings have ignited debates. Are the Toronto Maple Leafs really the team to beat in Canada? Are the Edmonton Oilers finally ready to be a top-tier team? Can the Calgary Flames’ acquisitions get them back on track? Will the Vancouver Canucks take a step back after making the playoffs next season or keep pushing forward?

There’s one more key question and big debate: who is the best player in the North?

The all-Canadian division boasts some of the best players in the NHL. The Oilers have two Hart Trophy winners in Connor McDavid and Leon Draisaitl. Auston Matthews had 47 goals last season in just 70 games, and the Leafs also boast Mitch Marner and John Tavares. Kyle Connor and Mark Scheifele are a deadly combination with the Winnipeg Jets, while Matthew Tkachuk is a next-level agitator and scoring threat for the Calgary Flames. Then there are defencemen, like Jeff Petry and Shea Weber with the Montreal Canadiens or Thomas Chabot with the Ottawa Senators, or goaltenders like Connor Hellebuyck with the Winnipeg Jets.

Those are all very good players. They’re also all worse than Elias Pettersson.

That’s a bold claim. After all, Pettersson didn’t even lead his own team in scoring last season, finishing second behind J.T. Miller on the Canucks by six points, and he was 23rd in the NHL in scoring. When the fans voted for the team’s MVP, Jacob Markstrom took home the honours, not Pettersson.

Besides, how can he possibly compare to someone like Connor McDavid, who has been labeled a “generational talent” and already has three 100+ point seasons and would’ve had a fourth if not for a global pandemic cutting short the regular season?

The answer is, he compares quite well, actually. He does so by doing something crazy: playing well defensively.

But don’t take my word for it. Let’s go to the statistics.

Pettersson in the 99th percentile 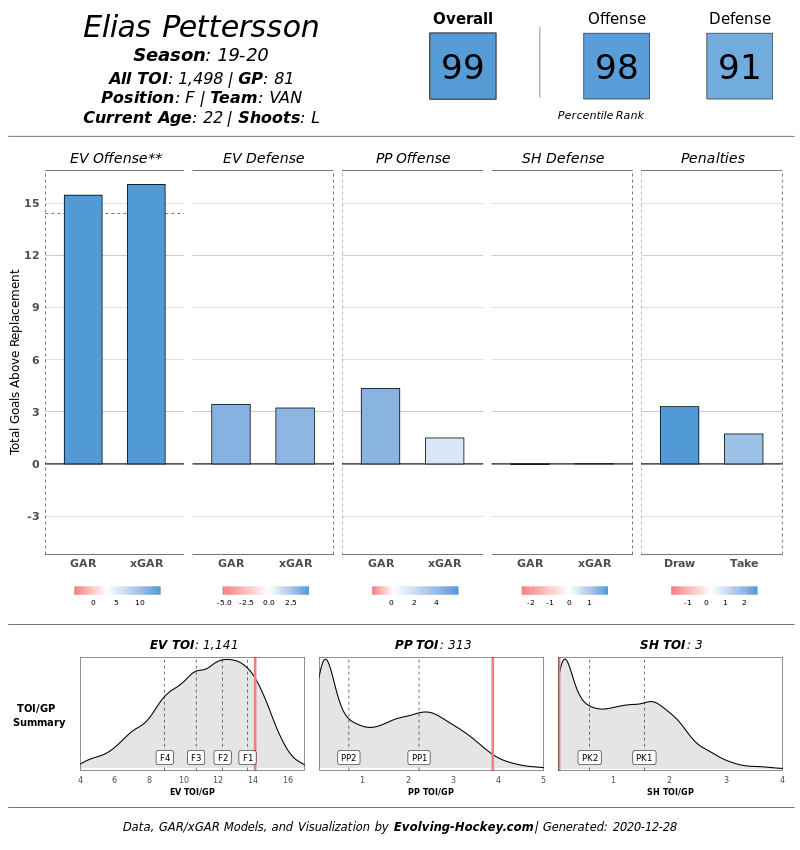 The player cards show the player’s rank as a percentile. If a player is in the 99th percentile, that means they’re better than 99% of the players in the NHL at their position.

Elias Pettersson is in the 99th percentile.

Not only is Pettersson off-the-charts good offensively — the double asterisk (**) on even-strength offence means they had to expand the chart to accommodate him — he’s also in the 91st percentile defensively, meaning he’s better than 91% of other forwards defensively. His offensive contributions still dwarf his defensive contributions — there’s a reason he’s a forward and not a defenceman — but he still has a significant impact.

He also doesn’t have a negative impact in any area of the game. He’s obviously a positive contributor on the power play and also draws a lot of penalties while not taking many himself. It’s almost certain that if he was used regularly on the penalty kill, he’d also have a positive impact.

In other words, Pettersson is a multi-dimensional, all-around great player. Even if he doesn’t put up 100 points, he has an impact in other ways.

Compare that to McDavid or Draisaitl and it’s night-and-day. 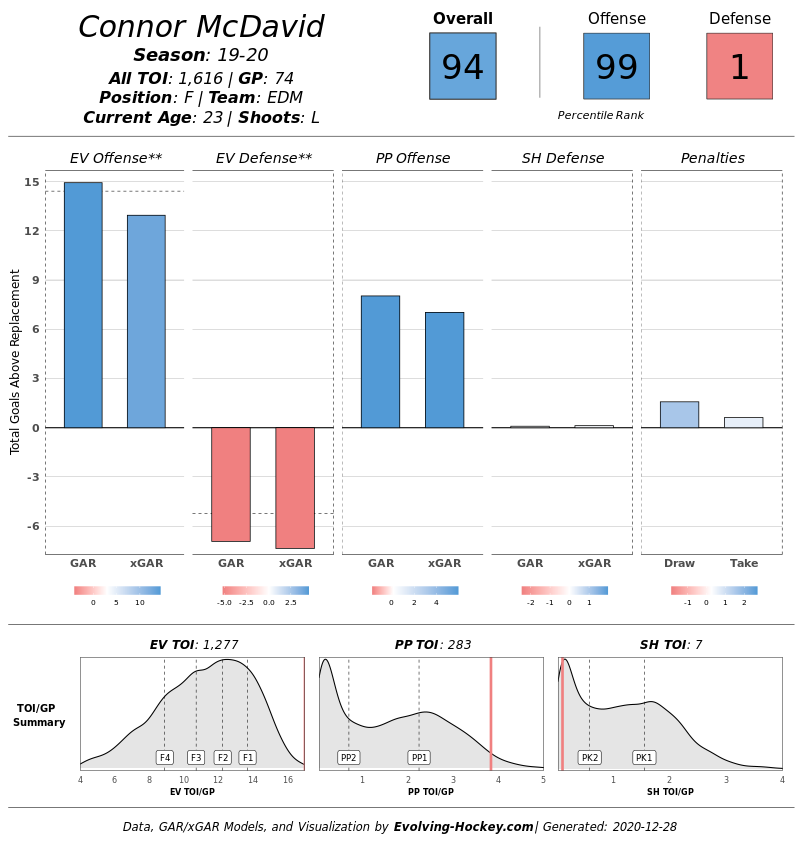 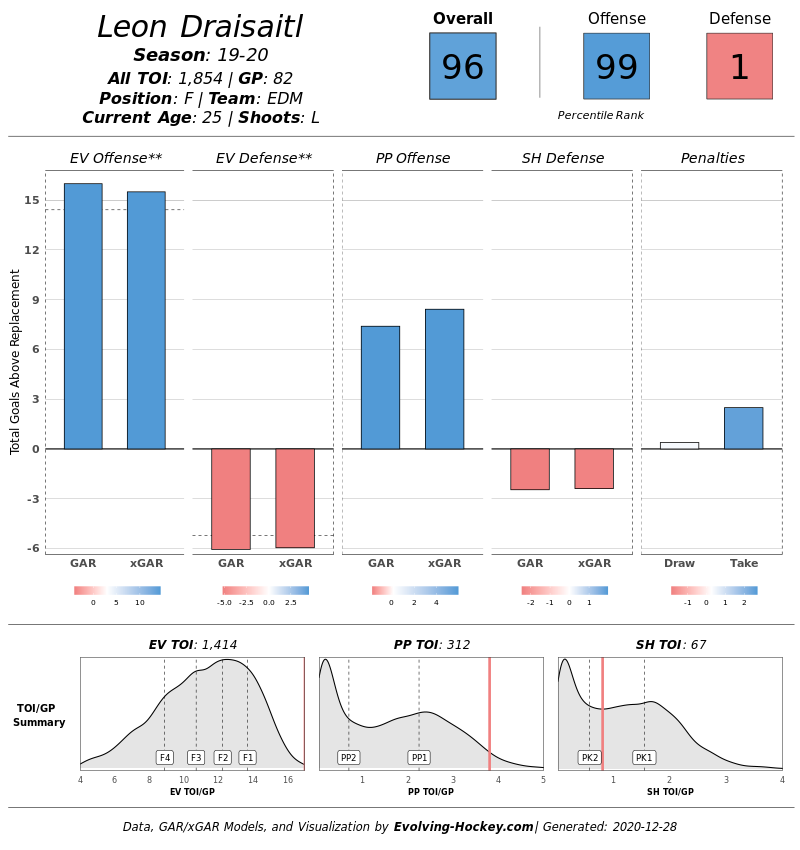 They’re still great players, because they’re just so dominant offensively, putting them in the 94th and 96th percentile of forwards overall. But that dreadful defensive impact makes them just a little bit worse than Pettersson.

There’s an argument to be made that it’s not McDavid’s or Draisaitl’s fault: because of their team’s lack of depth, they have to cheat offensively to put up points, because no one else will. They also have little help on the backend and their goaltenders have struggled, so they can’t be blamed.

Still, it’s up to McDavid and Draisaitl to prove it. Pettersson is already performing at a high-level defensively, making an impact at both ends of the ice. Let them do the same.

The same is true of Jets’ stars Mark Scheifele and Kyle Connor, though their offensive impact is less than that of McDavid and Draisaitl, so their 1st percentile defence drags them down more significantly. 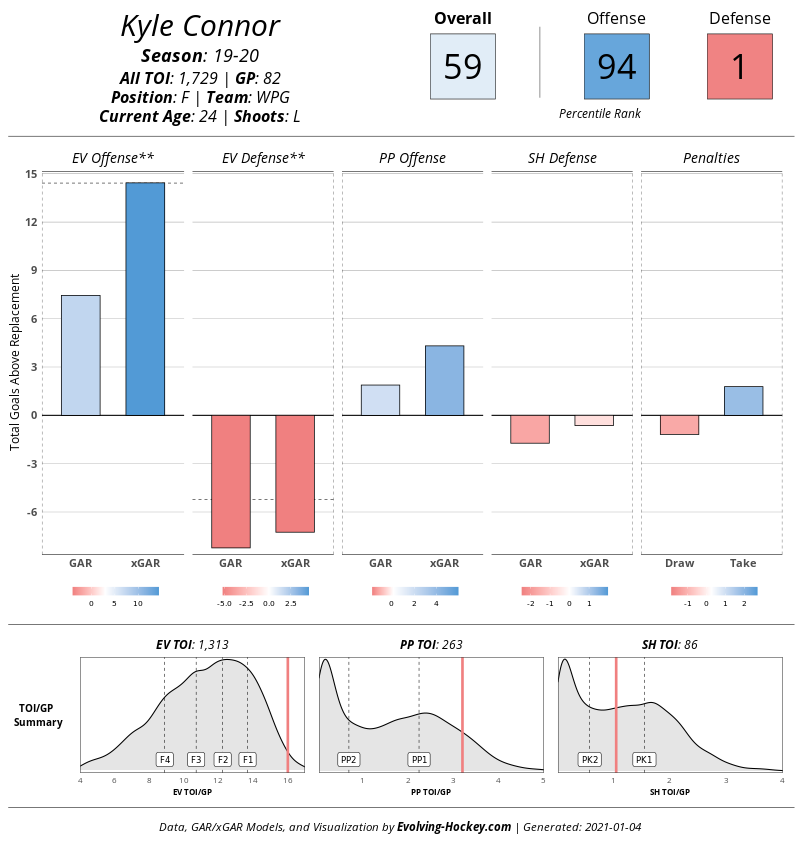 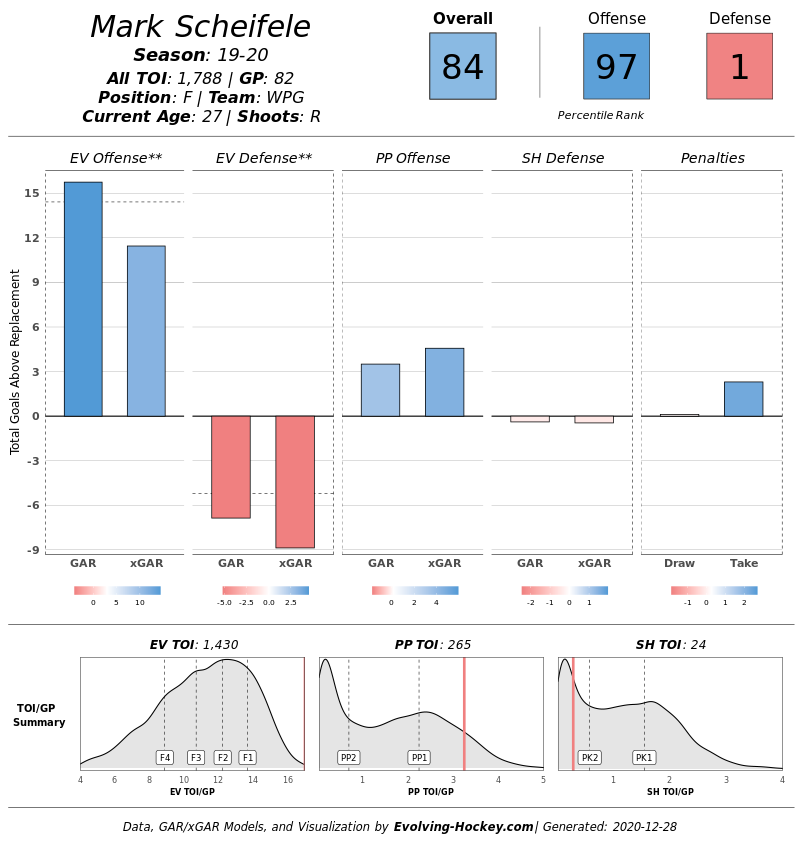 So, who does compare more favourably to Pettersson?

You could make an argument for a goaltender like Connor Hellebuyck, but it’s hard to make a direct comparison between such different positions. For the moment, we’ll leave that up in the air.

As for defencemen, there are a few contenders in Canada, one of whom is Pettersson’s own teammate, Quinn Hughes, but none of them quite match Pettersson analytically. The argument over who is the best defenceman in the all-Canadian division is for another day.

Instead, the closest contender for best player in Canada comes from the centre of the universe: Toronto. 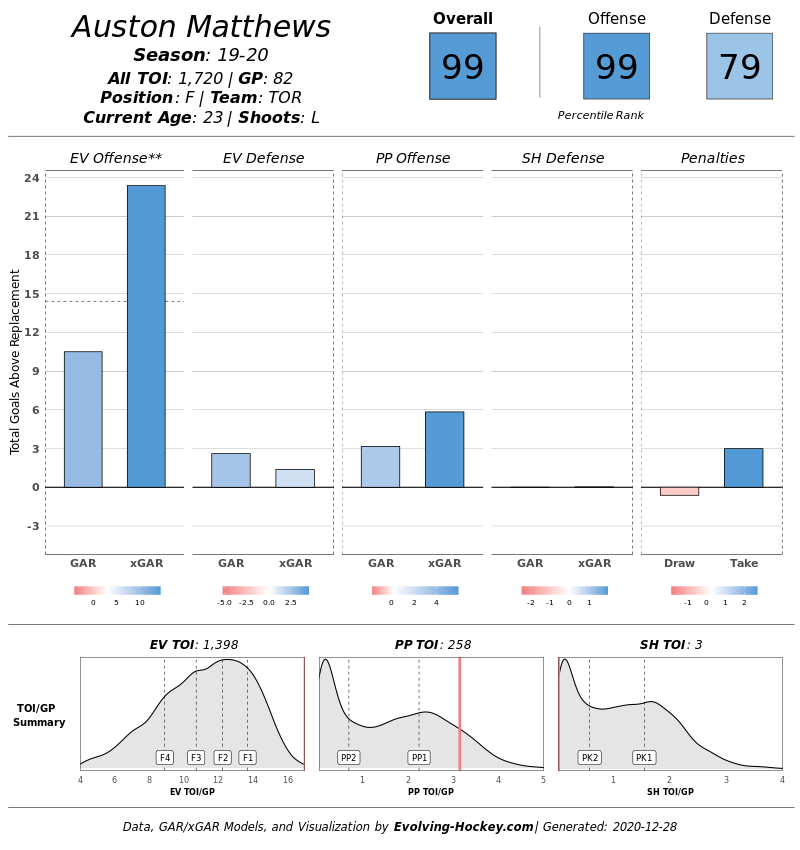 According to Evolving-Hockey’s player cards, Auston Matthews is also in the 99th percentile of forwards alongside Pettersson. He comes about it slightly differently, with a bigger impact on offence and less so defensively, and also draws fewer penalties.

What’s intriguing about Matthews is that the defensive impact is a recent addition to his game. He was much less defensively responsible in previous seasons and was even questioned for his defensive effort early last season. As the season progressed, however, the Leafs were far better defensively when he was on the ice, which can be attributed to winning puck battles in every zone and managing the puck effectively when it was on his stick to prevent turnovers.

At this point, picking between Matthews becomes a subjective exercise.

How much importance do you place in Pettersson’s ability to draw more penalties? Is the 22-year-old Pettersson or the 23-year-old Matthews more likely to improve in the coming season?