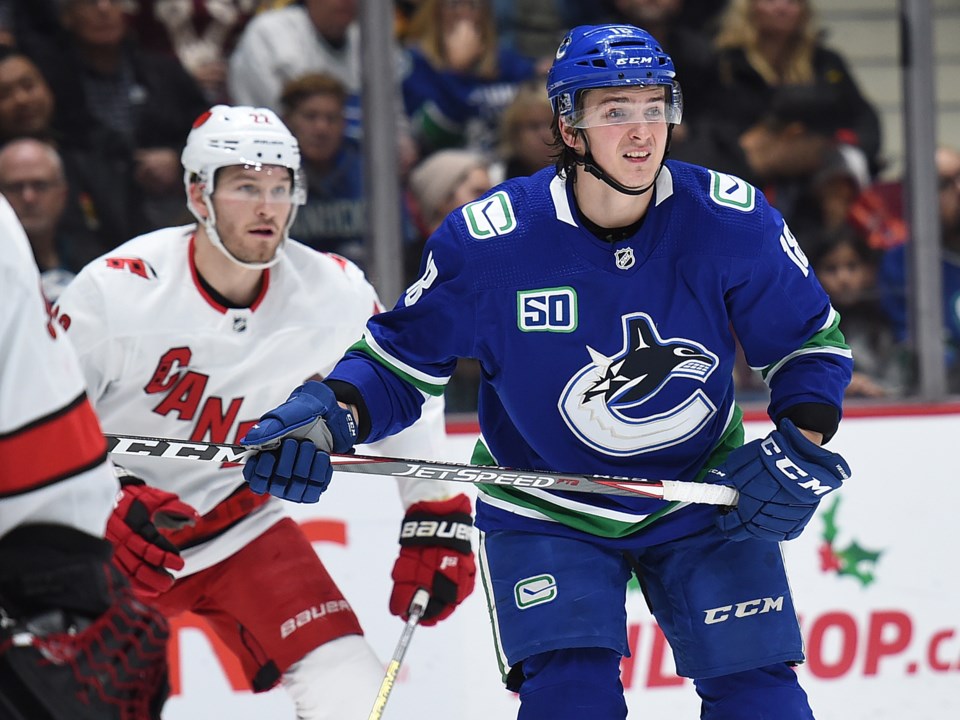 Jake Virtanen keeps an eye on the play during a game against the Carolina Hurricanes. He re-signed with the Vancouver Canucks on Thursday, October 22nd. photo: Dan Toulgoet

The Canucks' offseason checklist is running out of empty boxes.

Jim Benning ticked another item off the list on Thursday, re-signing restricted free agent Jake Virtanen to a two-year deal with an average annual value of $2.55 million. The signing of Virtanen adds a lot of clarity to the Canucks' salary cap situation. Technically, the Canucks are currently over the salary cap, but teams are allowed to exceed the salary cap by 10% during the offseason.

Based on previous calculations, with Virtanen and Adam Gaudette's contracts coming in a little bit cheaper than expected and the addition of a cheap utility forward at $800,000 in Jayce Hawryluk, the Canucks will be nearly under the cap for the start of next season in their current configuration. That means they don't absolutely need to exercise a buyout, something afforded to them by Virtanen filing for arbitration, or make a trade to shed salary, but can hopefully find that needed cap space when injuries inevitably occur or by carrying a 22-man roster to start the season.

If the Canucks do make a move to clear more cap space, however, they might be able to add another defenceman to solidify their defence corps.

By signing Virtanen now, the Canucks avoid salary arbitration, which would have been a wild card for a team in a tight cap situation. Virtanen's agent could have pulled up comparables like Jared McCann and Robby Fabbri, who both signed contracts just north of $2.9 million this offseason. On the other hand, the Canucks could compare Virtanen to Anthony DuClair at $1.65 million last offseason and argue that they are very similar players in many respects.

Arbitration also could have served as a wake-up call for Virtanen, who has plenty of enviable tools but lacks consistency and maturity to put those tools to best use. Perhaps the blunt assessment of his game in a legal setting would have been the kick in the pants he needed. Of course, the other side of that is sometimes arbitration can damage the relationship between a player and management — settling before arbitration is generally the safer option.

Virtanen is well aware that consistency will be the key to taking the next step. When he was asked about what steps he needs to take during a Zoom call with the media, it was clear what had been on his mind.

There is a pretty big opportunity open for Virtanen, as the team didn't bring back Tyler Toffoli. That leaves a significant hole on the right wing of the top-six. It's a hole that Virtanen would be happy to fill.

"I'd love to play top-six and have a bigger opportunity, more responsibilities," he said. "I want to be able to prove that to the team and my teammates that I can play up there and be consistent every night."

"Greener knows me pretty well," he added. "Whatever role he has me in, I'll be ready to go and making sure that I am consistent on a nightly basis and trying to do the little things right all the time...I want to be a responsible guy in different situations, whether it's the power play, if I can start somewhere on the PK if I have to, I want to start being able to open the opportunities for me."

In the press release announcing Virtanen's signing, Jim Benning praised the progress Virtanen has made on his two-way game and offensive contributions, but he sang a different tune after the playoffs. Benning was blunt, saying, "I was expecting more from Jake in the playoffs," and emphasized how patient the team has been with his development. Benning's words definitely stung Virtanen as he moved into the offseason.

"When your GM says that about you, you kind of go back home and you think about it a lot," said Virtanen. "For me, that was my first playoff experience, it was four or five years in the making and then my fifth year obviously getting not normal playoff circumstances with the being in the bubble and everything... At least I have that experience now, I know what to expect coming into the playoffs."

In order to grasp the opportunities available to him, take a step forward in his career, and prove he can meet Benning's expectations, Virtanen has a lot of hard work ahead of him this offseason. Last season, he had not just one disappointing training camp, but two, as the team came back for a second training camp heading into the quarantined playoffs. Virtanen talked about making sure he goes into next camp ready to go and, to that end, he's training in Kelowna with a veteran teammate.

"I work out with Tyler Myers every morning at his house, he has a gym," he said. "Mysie's a different animal in the gym. He trains really hard. I head over every morning and from the training to the eating habits and meal plans and the whole thing, we're both doing it together, which is pretty unreal. It's nice to have a teammate doing it with me."

The two have evidently been getting closer over the offseason, with Myers showing Virtanen around his adopted hometown — Myers played with the Kelowna Rockets in the WHL — and practically treating him like part of the family.

"He's a busy man, he's got his son and his wife and he's doing a lot of stuff. He kind of treats me like his son, which is pretty cool too," said Virtanen. "I go over there, post-workout we'll have smoothies, hang out for a bit, we'll go skate together, and then the rest of the day we just hang out, so it's good."