Elias Pettersson’s favourite goal song is you. Yes, you. 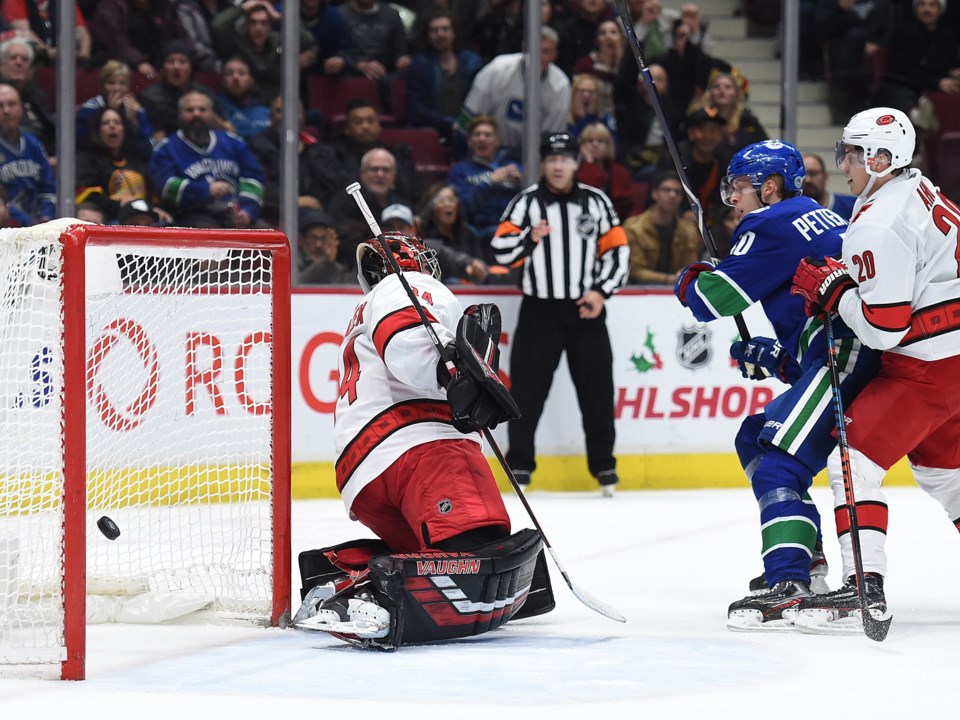 There was a minor controversy early in the Canucks’ season: the team’s new goal song for the 2019-20 season was bad.

That’s the type of controversy a team can afford to have when they score eight goals in their home opener and are 9-3-2 to start the season. The distaste for new goal song “Ain’t Talkin’ ‘Bout Love” by Van Halen — which surprisingly had nothing to do with the frankly egregious number of apostrophes in the title — had fans yearning for their previous goal song “Holiday” by Green Day, while others reminisced about the days when each Canuck had their own personal goal song.

That’s the premise of Steve Dangle’s latest video for Sportsnet, where he asked several star players what song they would choose if they could have a unique goal song. No one’s response was better than that of Elias Pettersson, who shows up at the 2:55 mark in the video below if you want to skip ahead.

As you might expect from a league with terrible taste in music, some of the choices aren’t great, including a couple country songs, Drake, and Pitbull.

There are some unexpected choices. I definitely didn’t see Eric Staal picking an electro house song like “Turbulence” by Steve Aoki. Jonathan Huberdeau went with “Space Jam” because he thinks his name is in the lyrics. It isn’t, unless there’s a Jon-specific remix that I’ve missed.

Some of the picks are pretty great. Patrick Kane got punny, picking “Rock You Like a Hurricane” by The Scorpions. Nico Hischier went with off-kilter Swiss rappers Lo & Leduc and their song “Jung Verdammt,” which is a pretty cool, unexpected choice.

In terms of actual songs, it doesn’t get much better than Mathew Barzal’s choice of “I Need a Dollar” by Aloe Blacc. It’s a superb soul song, though it’s hard to necessarily see how it would work as a goal song. Dangle suggests it might be a better soundtrack to his next contract negotiation.

Nothing can beat Pettersson’s answer, however.

After taking a moment to marvel at the breadth of human artistic expression — “There’s a lot of songs” — he admits that he can’t even hear the music after he scores. So, he decides that he doesn’t need a song at all.

“The fan’s noise,” he says. “When our fans are screaming, I know that that’s a good goal song.”

Perhaps this just shows that he doesn't like the Canucks' current goal song as much as the fans do, but I suspect it's more like Twenty-One Pilots declaring, "My taste in music is your face." It just shows how much Pettersson loves his fans. Pettersson’s preferred goal song is no song at all. He just wants to hear you after he scores.

He’s gotten the fans cheering plenty of times this season.

Jacob Markstrom is the Canucks’ MVP, J.T. Miller is outdoing all expectations, and Canucks fans are abuzz about the trade for Tyler Toffoli. What might get lost amidst all the other Canucks storylines right now is that Pettersson is laughing in the face of the concept of a sophomore slump.

When a member of the media brought up the possibility of a sophomore slump at the start of the season, Pettersson considered and then just said, “I don’t want to answer that.” After facing down so many doubts in his rookie season about his size, he had no time for any doubts in his sophomore season.

If anyone else had any doubts, he’s erased them. Opposing teams have played Pettersson as physically as the refs will let them, cheated towards him on the power play to take away his devastating one-timer, and committed their best defencemen and defensive forwards to shutting him down. Even with all that, he’s still scoring at a point-per-game pace.

Pettersson has 24 goals and 58 points in 58 games, leading the Canucks in both categories. He’s developed a more sustainable way to rack up points with his playmaking, taking advantage of the extra attention that has been paid to him by opponents.

By Evolving-Hockey’s WAR metric, which attempts to measure how much better a player is than a replacement player, Pettersson is the fifth-most valuable skater in the entire NHL. That’s because he combines his high-end offensive production with solid defence and elite penalty-drawing abilities, all of which factor into their WAR metric.

You can see the breakdown in this chart from Evolving-Hockey, which shows his even-strength offence and defence, power play offence, non-existent shorthanded defence, and penalties taken and drawn. 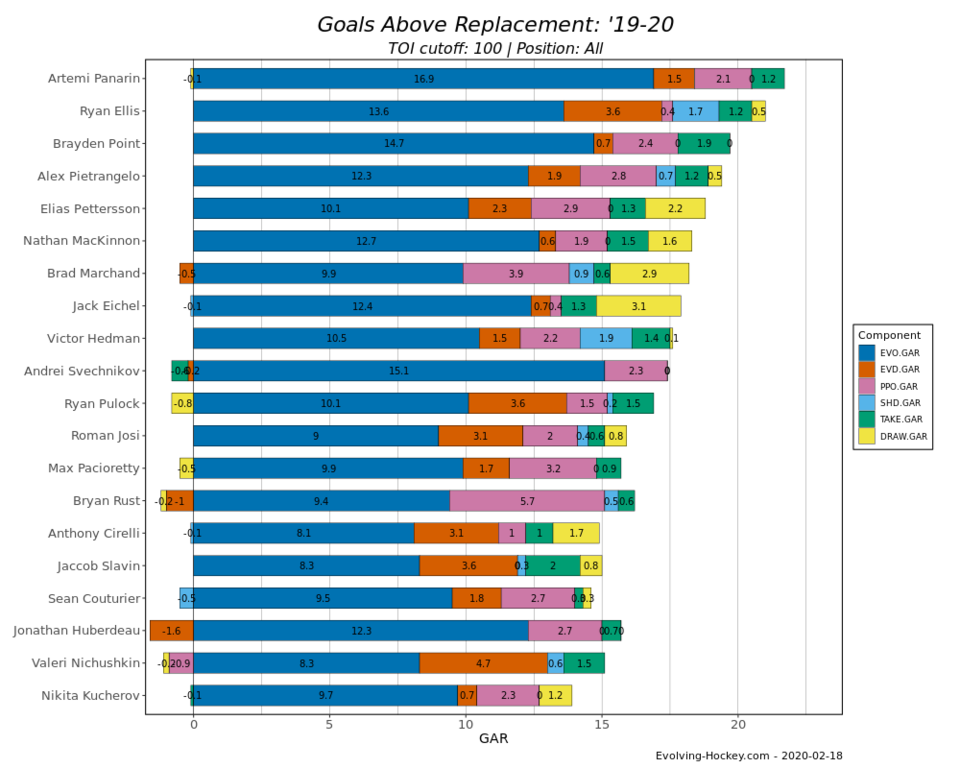 Another way to look at Pettersson’s impact is his heatmap from HockeyViz. Like WAR, it accounts for contextual factors like usage and teammates, but it produces a heatmap of where shots come from when that player is on the ice.

Pettersson’s impact is clear: when he’s on the ice at 5-on-5, the Canucks create dangerous scoring chances in the slot and high slot, and allow next-to-nothing from in front of their own net. Add in his tremendous finishing ability, impact on penalties, and power play production, and you have a pretty impressive picture. 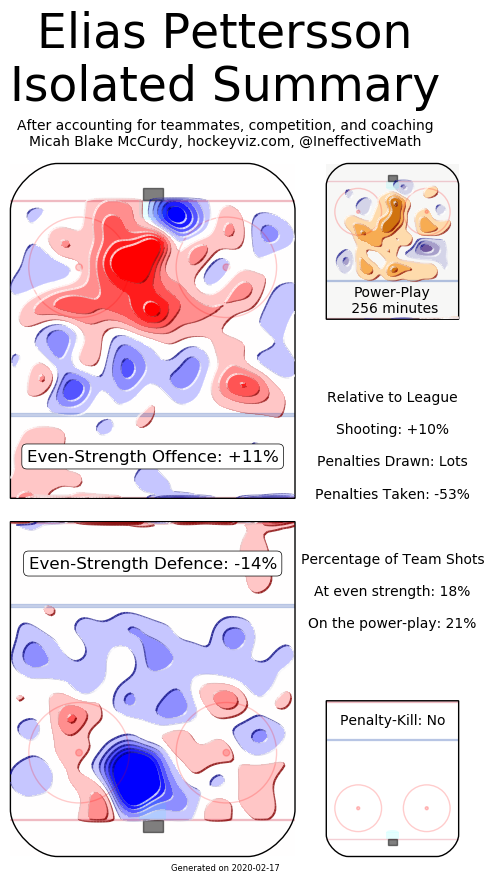 Is it surprising to see that he has an even stronger impact on defence than he does on offence? Pettersson's attention to details away from the puck far out-strips that of most 21-year-old hockey players.

What this all suggests is that Pettersson is one of the best players in the entire NHL and shouldn’t see a slump in his scoring any time soon. So, next time he scores a goal on home ice, drown out the goal song in cheers: it’s what Pettersson wants to hear.

How the Canucks can win every single NHL Award this season
Feb 14, 2020 4:49 PM
Comments
We welcome your feedback and encourage you to share your thoughts on this story. We ask that you be respectful of others and their points of view, refrain from personal attacks and stay on topic. To learn about our commenting policies and how we moderate, please read our Community Guidelines.