Why does the NHL have such bad taste in music?

Between whistles, it is an in-arena DJ’s job to keep the crowd entertained. Goal songs elevate the emotions of a home tally and, with the Canucks spinning The Cranberries’ “Zombie” to country pop queen Shania Twain, post-game locker room music truly can be whatever you want it to be.

On Saturday, Green Day played the intermission show at the NHL All-Star Game. The prolific rockers have been on the league’s radar for years—they were scheduled to headline the World Cup of Hockey festivities in 2016, but pulled out last-minute due to illness. At the start of this season the NHL announced a two-year marketing and promotional partnership with the band, who’ll be releasing their thirteenth album, Father of All Motherfuckers, next week.

I don’t mind Green Day all that much. Their three-song set didn’t include the Canucks beloved former goal song “Holiday,” but frontman Billie Joe Armstrong dropped a hat trick of f-bombs and it made for some entertainingly raw TV.

It got me thinking about the NHL’s talent selection over the past decade, which spans genres – and web pages, apparently. Not every act even made it into their respective event’s Wikipedia page. I did the best I could with my table. The All-Star Game was not held in 2013 or 2014, hence the greyed boxes. There was no musical entertainment at the pared down, post-lockout 2013 NHL Awards; the 2018 Awards had a pre-recorded performance by Panic! at the Disco from the Stanley Cup Final. 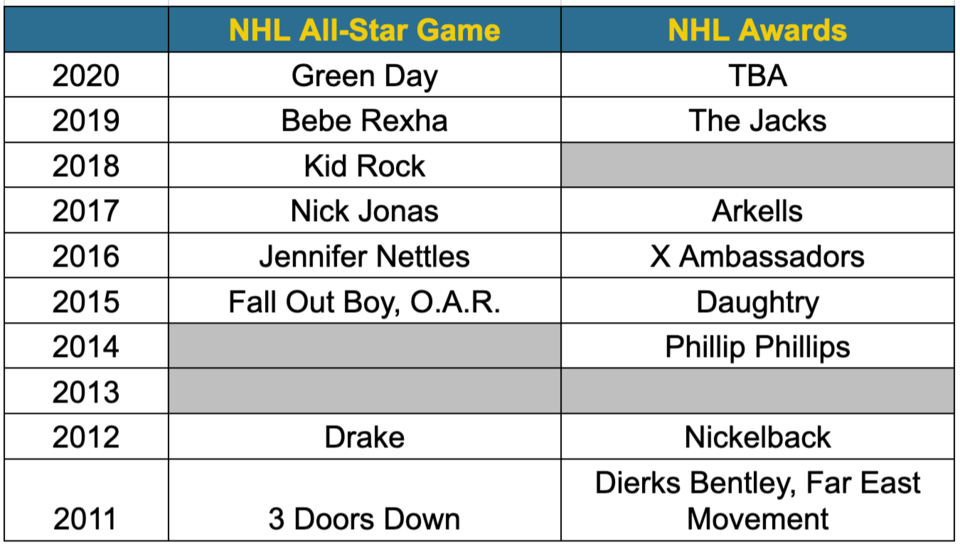 The artists chosen to serenade the NHL's best!

Now I’ve heard of all of these artists, except for The Jacks, who were more house band than headliner at last year’s awards ceremony. But I can name songs by only half of them and am likely not alone in that regard. Several were at their chart-topping prime years ahead of their NHL invite. Arkells’ fun rendition of “Knocking at the Door” remains a lone stand-out amongst a surge of generic and uninspired showings.

Hockey is a business and, like Green Day, I’m sure some of them have, or had well-established relations with the league at the time of their appearance.

Look at O.A.R. The band kicked off the 2020 NHL All-Star weekend in St. Louis with an outdoor concert, a whole 5 years after their own intermission gig — and 12 years after the release of their most successful single, “Shattered (Turn the Car Around).”

Don’t even get me started on their outdoor games. Train, Weezer, Bryan Adams, and the Goo Goo Dolls have graced the ice in the past 3 years. If you take out the acts firmly rooted in nostalgia, you’re left with a lot of southern rock and country.

Who could forget Brandon Sutter and “Callin’ Baton Rouge?”

These are marquee games and events for the NHL – an opportunity to share the energy and passion of the sport with a wider audience. But they continue to misfire on many levels, bringing in artists that, while accomplished in their own right, are too outdated and/or underwhelming for the vision they should be building around: one that’s exciting, and innovative, much like their young players.

Here are 3 acts I’d like to see headline an NHL event:

The English glam rock band has drawn comparisons to Queen and the Rolling Stones, due in part to their frontman Luke Spiller, who can certainly command a crowd like his predecessors. They also opened for Foo Fighters across the U.S. last year; their spunky, fast-paced tunes are more than ready for another stadium-sized gig.

A co-worker introduced me to DFA a couple years back, and I was intrigued by how bruising their sound is for a two-piece. They’re loud and climactic and Canadian, which is a lot like my ideal hockey game.

I know the All-Star Game is no Super Bowl halftime show, but the NHL needs to go big or go home if they’re looking to pop artists with seemingly no relevance to the live sporting experience. Swift broke into the scene over 13 years ago but – unlike many of the aforementioned artists – remains as popular as ever. Her hook-y songs about love and self-empowerment have earned her 10 Grammys and a dedicated fanbase around the world.

You don’t listen to T Swift? No problem. Maybe your children or your grandchildren do, which is the kind of thing that makes the All-Star Game intergenerational.

And “Shake It Off” would be great with a montage of the biggest hits and goals in the game. Don’t even lie to yourself.