Elias Pettersson’s injury could be season-ending 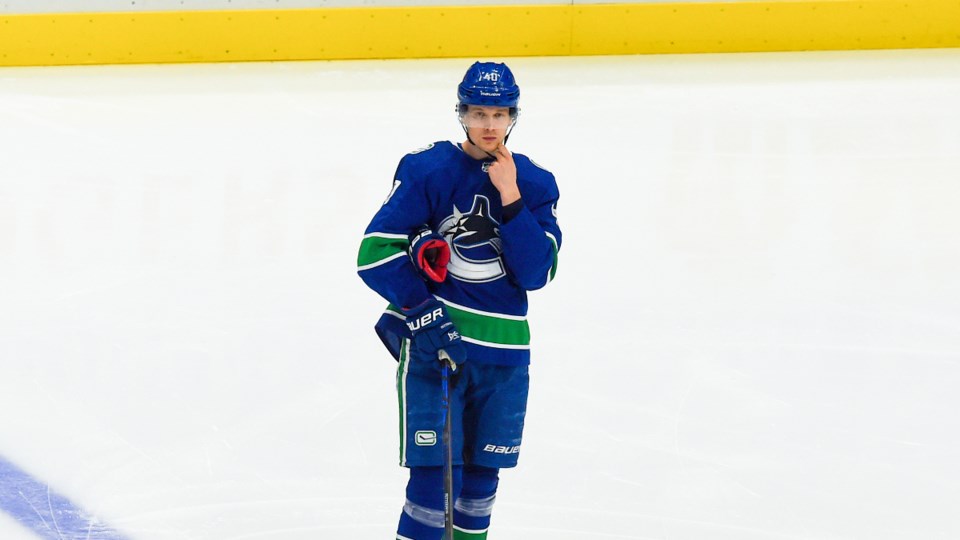 The Vancouver Canucks haven’t played in three weeks but are expected to return to game action on Sunday against the Toronto Maple Leafs. It’s not yet known what the team’s lineup will look like, as some players likely won’t be ready to return after dealing with difficult COVID-19 symptoms.

One player, however, definitely won’t be in the lineup: Elias Pettersson.

Pettersson was initially injured in a game against the Winnipeg Jets on March 1. He then played again the next night and was at practice on March 4 but left partway through. He hasn’t played since.

A week ago, Canucks GM Jim Benning said that Pettersson was seeing a specialist and suggested that he was close to a return.

“I don’t think he’s that far away from playing,” said Benning, “but it’s getting the okay that his injury’s healed and he’s 100% and then we’ll go from there.”

Evidently, Pettersson’s visit with a specialist did not go as hoped. On Friday, Benning provided an update on Pettersson with much less optimism.

Pettersson’s initial injury assessment was “day-to-day.” To go from that a month ago to possibly not even returning this season is a significant change.

While the Canucks have not confirmed the exact injury, reports indicate that it is a wrist injury. That would allow Pettersson to continue to exercise but would preclude the type of heavy stress placed on the wrist when taking shots and battling along the boards.

“He'll continue to do what he can do and when he keeps visiting the specialist here and his next appointment, then he'll let him know where he's at,” said Benning. “As of right now, I was hopeful that maybe he could come back but after the visit on Wednesday, he's going to be a little bit longer yet.”

If there’s any silver lining to Pettersson’s injury, it at least kept him clear of the Canucks’ COVID-19 outbreak. Apart from Jay Beagle, who was back skating with the team prior to the outbreak, none of the Canucks’ injured players tested positive for COVID-19. Even Beagle was cleared after one test, confirming a false positive.

With the Canucks facing a very tough schedule over the next month, missing one of their star players, particularly one who wasn’t affected by COVID-19, will make things even more difficult.