I regret to inform you that “big boy hockey” is back

Are the Islanders, Lightning, Canadiens, and Golden Knights still in the Stanley Cup Playoffs because they're big or because they're good?
Jun 18, 2021 3:52 PM By: Daniel Wagner

It’s that time of year again — time to take the small sample size of the Stanley Cup Playoffs and learn some lessons. Every team that makes the Conference Finals isn’t just a team — they’re an example that every other team should follow. Unless they lose, of course, because then they clearly did something wrong and the team that beat them must be the platonic ideal of a winning hockey team.

Despite the sarcasm, it’s not a bad idea to try to learn from successful teams. The issue is that so often people learn the wrong lessons because they fail to identify what makes those teams successful.

It’s easy to try to boil down a successful team to one intangible quality that makes them great. It’s the source of so many sports cliches: the winning team wanted it more, they had better leadership in the room, they left it all on the ice, they played with more fire and passion. When teams lose, it’s because they’re too soft, didn’t want it enough, and don’t have enough heart.

When hockey fans and writers do land on a tangible quality, it’s often size. Some will call it “big boy hockey” — heavy, gritty players who can win battles and punish their opponents.

Just look at the Tampa Bay Lightning last year. They won the Stanley Cup with their speed and skill leading the way: Nikita Kucherov and Brayden Point had 34 and 33 points, respectively, to lead the playoffs in scoring by a wide margin.

Commentators were quick to point out, however, that the Lightning had been bounced in the first round the previous year and that they added size at the trade deadline — two 200+ lbs forwards in Barclay Goodrow and Blake Coleman.

Maybe it’s a little of both, but I would suggest the Lightning probably cared more about the “good at hockey” part. Also, they probably cared quite a bit about their very cheap cap hits.

This year, two underdog teams that finished fourth in their respective divisions — the New York Islanders and Montreal Canadiens — have made the Stanley Cup semifinals to face two of the favourites — the Tampa Bay Lightning and Vegas Golden Knights. How did they do it? Well, some have pointed to their size, particularly on their respective fourth lines.

The Islanders have the “Identity Line” of Matt Martin, Casey Cizikas, and Cal Clutterbuck. Cizikas is the smallest at 195 lbs, while Clutterbuck comes in at 215 lbs and Martin tips the scales at 220 lbs. Together, the trio are dominant defensively, led by Cizikas, who has been an analytics darling for a while now.

Those are some big boys and Canadiens forward Brendan Gallagher even invoked the phrase about the trio earlier in the playoffs, saying, “They’re playing big-boy hockey.” Sure, Staal and Perry are also experienced scorers, each with over 400 goals in the NHL, and Armia is second on the Canadiens in scoring in the playoffs, but they’re also big boys.

How much does size matter?

It’s not just size, of course — the above two fourth lines play a hard-nosed, gritty style — but I also don’t want to dismiss size out of hand. As much as it’s a cliche to latch onto size when it comes to playoff hockey, it’s worth seeing if size really does matter. After all, there are legitimate reasons why size might make a bigger difference in the playoffs than in the regular season, such as the relaxed standards of officiating that might allow bigger players to get away with more interference on smaller players.

So, I took all the playoff teams and calculated their average height and weight, weighted by games played in the playoffs. Here they are, sorted by average weight.

(The height is in inches not feet, as otherwise the NHL would be full of extremely tall, extremely skinny players) 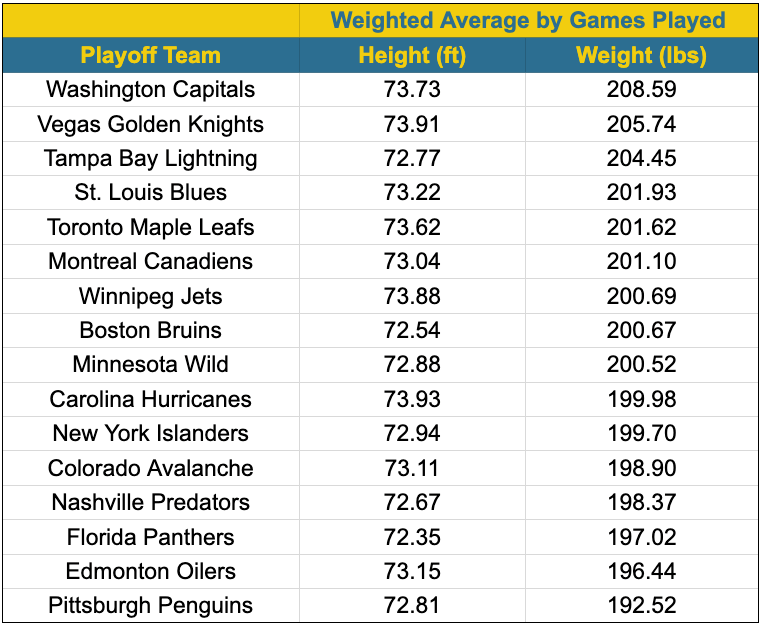 The average height and weight of teams in the 2021 Stanley Cup Playoffs.

Overall, playoff teams are, on average, 6’1” and around 201 lbs. That’s the same height, but slightly heavier, than the average NHL player this season, so maybe there’s something to be said for weight, if not height, helping a team to get to the playoffs. It's not a huge difference, so maybe not.

The Vancouver Canucks, for what it's worth, were above average in height at 6'2" and right around average in weight at 199 lbs.

So, if you’re looking for confirmation that size matters in the playoffs, those two teams could be a compelling argument. It’s undercut quite a bit, however, by the two teams right around them. Both the Capitals and St. Louis Blues were knocked out in the first round by smaller, more skilled teams: the Boston Bruins and Colorado Avalanche.

Then there’s the Canadiens and Islanders. They may have some size in their lineup, but they’re not the biggest teams. The Islanders are below average, in fact, in the same area as the Avalanche and Carolina Hurricanes.

The Canadiens, meanwhile, are about the same size as the Toronto Maple Leafs, who they rallied to defeat in seven games in the first round. They’re just a hair bigger than the Winnipeg Jets, who they swept in the second round. It doesn’t seem like size was the difference in those two series.

It makes sense that the Canadiens wouldn’t be at the top of this list. They’re getting big contributions from the 5’7” Cole Caufield, after all.

Still, it’s hard to ignore a pair of teams that disappointed in the playoffs showing up near the bottom of this list: the Colorado Avalanche and Edmonton Oilers. Do they need more size?

The Avalanche were outright dominant in the regular season before falling to the Golden Knights in the second round. The Golden Knights are a talented team too, so perhaps size gave them a slight edge overall.

The Oilers are an odd case, however. They got swept by the Jets in the first round, but their problems seem far more extensive than a lack of size. They should probably address their goaltending, scoring depth, and shaky defence before worrying too much about size.

Hitz with a zed

There’s another way to look at “big boy hockey,” which I alluded to earlier: style. A big boy is not only big and wears big boy pants and goes to the potty all by himself — he also plays a gritty game and throws hits. Or, as a much-missed colleague would say, "hitz," with a zed.

So, let’s look at how many hits playoff teams are throwing. 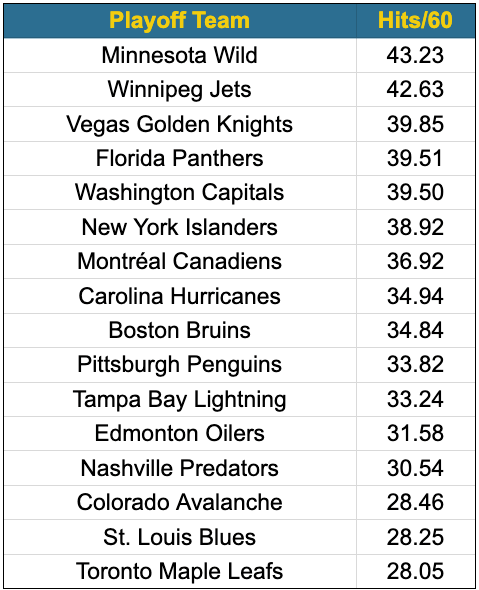 Hits per 60 minutes for teams in the 2021 Stanley Cup Playoffs.

Here’s an important thing to note: a large number of hits can often be a bad sign, because it means you don’t have the puck.

It’s also hard to ignore the Jets at second in hits/60 and the Maple Leafs dead last. Maybe, just maybe, there’s something to the argument that, despite being above average in size, the Leafs did indeed play too soft.

The Islanders also hit above their weight on this list. Maybe that’s helped them get an edge on their opponents.

Let's hear one for the little guys

There’s just one last thing I would like to point out, however. The Islanders are being led in playoff scoring by 5’10” Jean-Gabriel Pageau. The Lightning are being led by 5’11” Nikita Kucherov and 5’10” Brayden Point.

For the Canadiens, leading scorer Tyler Toffoli is at least 6’0”, but tied for second is 5’11” Nick Suzuki, and his other linemate is 5’7” Cole Caufield. It’s similar for the Golden Knights, led by 6’0” William Karlsson, but their second-leading forward is 5’9” Jonathan Marchessault.

Maybe "big boy hockey" with the size and the hits matters a little, but maybe the real lesson from the final four teams in the Stanley Cup Playoffs is to get some little guys that can score.

Delayed but not hurt — Mikey DiPietro's development still on track after a full year without playing games
Jun 16, 2021 5:02 PM

Which bottom-six forwards aced their audition with the Canucks?
Jun 14, 2021 4:40 PM
Comments