Sam Reinhart reportedly wants out of Buffalo. The Canucks say they’re willing to trade the ninth-overall pick. You can see where this is going.

Sam Reinhart reportedly wants out of Buffalo. The Vancouver Canucks say they’re willing to trade the ninth-overall pick. You can see where this is going.

While Reinhart hasn’t quite lived up to being selected second overall in the 2014 NHL Entry Draft, one pick ahead of Leon Draisaitl, he’s been a consistent point producer for the Buffalo Sabres. This past season, he led the Sabres in scoring with 25 goals and 40 points in 54 games.

That’s a 38-goal pace over 82 games and it tied him for 11th in the NHL in goals. It was a very good season. The trouble was, the Sabres were very bad, finishing dead last in the NHL with a 15-34-7 record.

It seems entirely likely the Sabres will trade franchise forward Jack Eichel and go back to the drawing board with yet another rebuild. It’s a prospect that Reinhart, having gone six seasons without making the playoffs, is dreading.

There have been rumours that Reinhart, who grew up in North Vancouver, wants to play on the west coast. Unsurprisingly, that's led to buzz around the possibility of a trade to the Canucks.

It would be perfectly understandable if the Canucks were interested in Reinhart. He’s a versatile forward that can play on the wing or at centre. He’s adept at making plays but also scoring goals, especially around the front of the net. It’s easy to envision Reinhart lining up on the wing with Bo Horvat or centring a scoring third line with time on the first power play unit.

"If we're going to trade that pick, it's got to be for an excellent player."

In terms of assets, the Canucks have something a rebuilding Sabres team would covet: a top-ten draft pick. After the draft lottery, Canucks GM Jim Benning said the team would keep their options open when asked about potentially moving the ninth-overall pick.

Those sentiments were echoed by assistant general manager Chris Gear in an interview with Matt Sekeres and Blake Price.

“We know that if we take the pick at nine, it's going to be a very good player that will help our organization long-term,” said Gear. “Jim's made the comment before, if we're going to trade that pick, it's got to be for an excellent player that's young enough… We're not trading for an old player, but if it's somebody that's in the wheelhouse of the current core group, then maybe it's something we have to look at.”

Does Reinhart fit that description? He’s certainly a very good player and as Reinhart noted, he’ll be turning 26 early next season, which means he’s younger than both Bo Horvat and J.T. Miller, who are obviously part of the current core group.

On the other hand, if the Canucks are focused on being competitive when their younger stars — Nils Hoglander, Quinn Hughes, Elias Pettersson, and Brock Boeser — are in their prime, then Reinhart is arguably a little old. What the Canucks need are players that will be hitting their prime at the same time as the younger part of their core group or even younger prospects who can be inserted into the lineup while still on their entry-level contracts.

Reinhart would make the Canucks better in the short-term and Benning has said he’ll be aggressive in the offseason to get back to the playoffs next year. There’s still one enormous catch: Reinhart is going to be, like L.A. Symphony, very expensive.

Can the Canucks afford Reinhart?

It’s not just the cost of trading for Reinhart, which will start but not end at the ninth-overall pick. It will certainly be a costly trade in that sense, but Reinhart also doesn’t have a contract for next season.

Reinhart is a restricted free agent coming off a contract with a cap hit of $5.2 million per year. After a season where he was on-pace for 38 goals, he’s going to want a raise. Evolving Hockey’s contract projections predict a five-year deal for Reinhart worth around $6.9 million per year.

The Canucks are already going to be unable to sign Pettersson and Hughes to long-term deals because of their salary cap situation. Instead, they’re likely to settle for short-term bridge deals that will cost them more long-term when they sign their third contracts. How, then, could they possible fit another $6.9 million for Reinhart?

To illustrate the issue, I put together this roster using CapFriendly’s roster simulator with a few assumptions, such as Pettersson and Hughes combining for a $13.25 million cap hit and Jake Virtanen getting bought out. 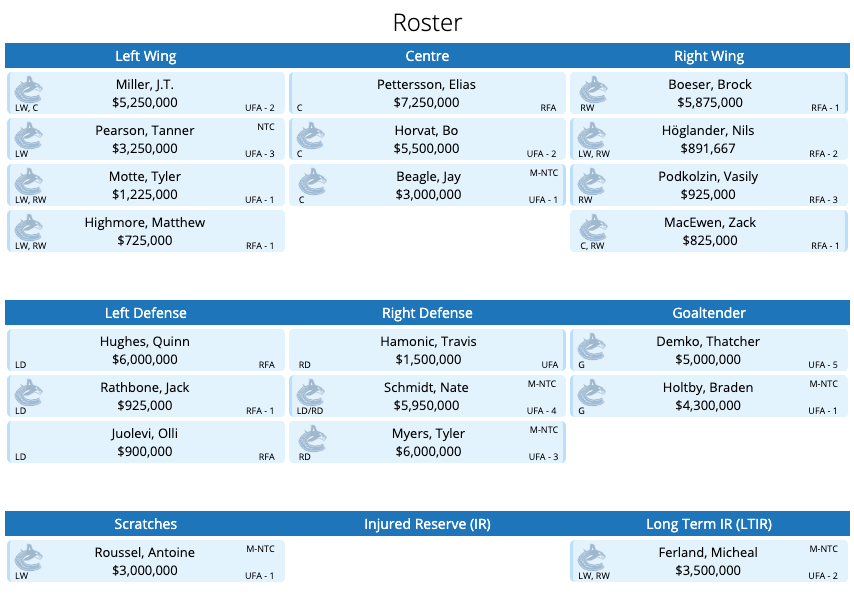 This 20-man roster leaves just over $5.2 million in cap space to sign three players. It also still has some significant holes to fill, such as a third-line centre and a top-four defenceman.

The only way the Canucks could possibly afford Reinhart on their roster next season is if they clear some significant cap space. That means hoping the Seattle Kraken take Braden Holtby and his $4.3 million cap hit in the upcoming expansion draft, somehow convince the Kraken to take Loui Eriksson and his $6 million cap hit — which means trading away even more draft picks — or trading away Tyler Myers, in which case the Canucks would need to sign or acquire yet another defenceman.

Even if you assume that the Kraken take Holtby, that still doesn’t leave a lot of cap space to upgrade other parts of the lineup if the Canucks trade for Reinhart. That would mean around $9.5 million in cap space given the assumptions baked into the above roster. If Reinhart takes up $6.9 million of that space, that leaves $2.6 million for a backup goaltender, a top-four defenceman, and another forward.

Even worse, Reinhart is just a year away from unrestricted free agency. You can imagine the disaster if he refused to sign a long-term deal and instead signed for one year and left in free agency.

The other issue is that while Reinhart is a good distributor and finisher, he does not drive puck possession particularly well. That's one of the biggest weaknesses for the Canucks, and Reinhart would be a very expensive way to not solve that problem.

The Canucks would be better off using the ninth-overall pick and trying to land a prospect who could potentially be as good as Reinhart in the future. If they pick the right player, he could even be ready to contribute in two to three years, when the Canucks might actually be a competitive team. That’s when the Canucks would most need talented players coming up from the prospect pool to support their young core.

If the Canucks were in a different situation — closer to true Cup contention with more cap space available — Reinhart would absolutely make sense for the Canucks. Given reality, however, Reinhart is not a player that the Canucks should be pursuing.

Delayed but not hurt — Mikey DiPietro's development still on track after a full year without playing games
Jun 16, 2021 5:02 PM