“I would never, ever think about betting against Mike DiPietro as a goaltender,” said Ian Clark.

What is more valuable for a young goaltender? A season of working directly with one of the best goaltending coaches in the world or actually playing games?

Over the past 15 months, Vancouver Canucks goaltending prospect Michael “Mikey” DiPietro has played just four games, all in the AHL. At the same time, his year has been full of valuable experiences. He was able to spend ample time working with Canucks goaltending coach Ian Clark as part of the team’s taxi squad and he joined Team Canada at the World Hockey Championships as their third-string goaltender, bringing home a gold medal as a reward.

The Canucks have to hope that DiPietro’s development hasn’t been stunted by a lack of games played. It’s a concern that Kevin Woodley, writer for NHL.com and InGoal Magazine, raised during the season.

“I’ve talked to other organizations that have models in terms of goaltenders and how they get to the NHL and the one thing that you can’t skip is games played,” said Woodley. “As [goaltending coach Mitch Korn] has told me many times, ‘Beer pong is a game of shots. Goalie is a game of patterns and the only way to start to put those patterns together and recognize them is to play games.’”

How will the lack of games affect DiPietro? It’s a hard question to answer because it’s an incredibly rare situation. Top goaltending prospects don’t go over a year without playing a game — it just doesn’t happen. Even goaltenders that suffer serious injuries rarely go a full year without playing.

"I wouldn't say it hurt his development."

In an interview with Matt Sekeres and Blake Price, Clark had to admit that going without games was far from ideal for DiPietro, but that it won’t hinder him long-term.

“I wouldn't say it hurt his development. Perhaps it delayed his development just from the lack of competitive game situations,” said Clark. “Obviously, he and I got to spend a lot of time together, I guess we'll see what that translates to.”

Clark is optimistic about DiPietro, primarily because of his ability to translate coaching into game situations so quickly. Perhaps that’s why he’s less concerned about the lack of games.

“His intelligence for the position, his ability to transform himself — a lot of times, you have these goalies, and people will say 'Oh, he has to do the work in the summer time, because you can't do that during games or in season.' Mikey's ability to grab on to something that he believes is going to help him, right on the fly in a rookie season in the American Hockey League as a first-year pro was truly remarkable,” said Clark.

That first season in the AHL was quite strong. On a numbers level, DiPietro’s rookie season doesn’t compare to the best performances by a 20-year-old goaltender in the AHL — the high water mark is Matt Murray’s incredible .941 save percentage in 2014-15 — but there are still some intriguing comparable players.

Looking just at 20-year-old goaltenders in the AHL who played 25+ games and had a save percentage one point away from DiPietro’s .908, we end up with 15 goaltenders, including a few familiar faces for Canucks fans. 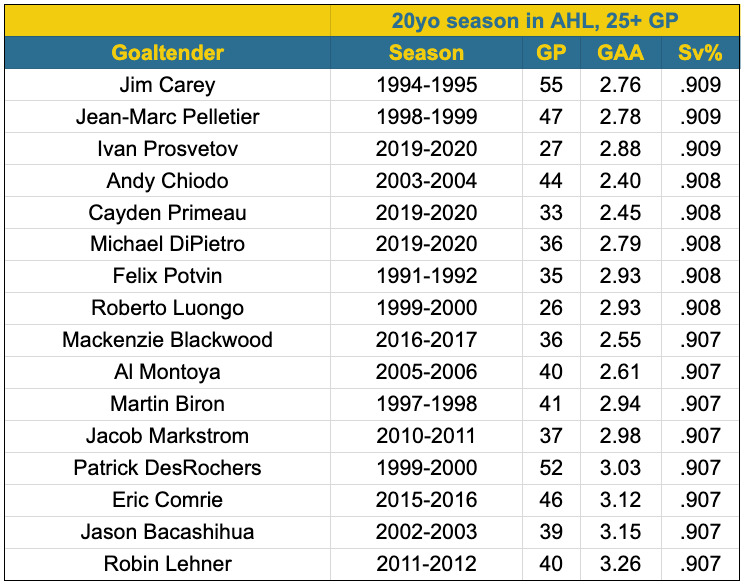 Comparable goaltenders to Mikey DiPietro's rookie year in the AHL.

Yes, that’s Roberto Luongo with an identical .908 save percentage as DiPietro in his first professional season and Jacob Markstrom just a hair worse at .907 as an AHL rookie. Felix Potvin even pops up as a comparable.

There are some other fun names in the mix, including a Vezina winner in Jim Carey. That said, Carey and Potvin should probably be discounted — their .909 and .908 save percentages actually led the AHL in their rookie seasons. Goaltending in the early-to-mid 90’s was a different world.

There are some other good-to-great goaltenders on this list, including Marty Biron and Robin Lehner. If we expand the save percentage boundaries by a couple of points downwards, we can add Tuukka Rask, Tristan Jarry, Adin Hill, and Jack Campbell too.

There are also several journeyman goaltenders, of course, and a few that never really cracked the NHL. Still, it’s encouraging to see so many good goaltenders that had similar seasons to DiPietro’s rookie year.

The one major difference is that all of them played a lot of games their following season as a 21-year-old. To be fair, DiPietro was in a very unique situation.

Thanks to the COVID-19 pandemic and the quarantine requirements when traveling into Canada from the U.S., DiPietro wasn’t able to play in the AHL and still remain an option to get called up to the Canucks. In addition, the Canucks had to carry a third goaltender on their taxi squad and wanted to have someone they felt comfortable playing in NHL games if injuries struck. Instead of acquiring a cheap veteran to sit on the taxi squad, DiPietro spent the season there instead.

“It was a bit of a funky year,” acknowledged Clark in an interview with Mike Halford and Jason Brough on Sportsnet 650. “But he and I got to spend a lot of time together. I think where his game is at from a structural and positional and athletic standpoint, all those tangible things that you can actually work on day-to-day — some of the intangibles are tough to work on when you're not getting dynamic game action.”

DiPietro spoke to Postmedia’s Ben Kuzma about the challenges he faced while stuck on the taxi squad.

“As the year went on, it was extremely hard,” said DiPietro. “You’re skating and working out, but at the same time, you don’t feel like you’re part of the team. I got one or two call-ups and then you’re back down and it’s the hardest thing I’ve ever had to do mentally.

“I went through every different emotion — frustrated, happy and sad — and you question things, which is only natural. I had to lean on my mental-strength coach a lot during it. With all the things said about the AHL maybe starting up, I was getting restless and I tried to not let it come to the rink with me.”

That, at least, DiPietro accomplished. Clark was quick to praise DiPietro for his attitude on the ice.

“He came with a smile on his face, came with energy, came with spirit, and was an infectious guy on our taxi squad,” said Clark. “I know, in speaking with Roberto [Luongo], he was an incredible asset for Team Canada at the World Championships. I know he didn't get into games, but he was there and he was an incredible support mechanism for Adin Hill and Darcy Kuemper, and Roberto speaks very glowingly about him.”

"He is aiming for the top every day of his life."

A couple of the comparables to DiPietro were in the same boat in terms of the pandemic. Ivan Prosvetov and Cayden Primeau.

Prosvetov and Primeau — goaltending prospects for the Arizona Coyotes and Montreal Canadiens, respectively — had similar rookie seasons in the AHL as DiPietro in 2019-20. This past season, with their AHL teams located close to their parent clubs, each got into NHL games as 21-year-olds. Prosvetov played a total of 22 games, including three in the NHL, while Primeau played 20 games, four of them in the NHL.

Both goaltenders struggled in their brief NHL stints but how much more valuable was it for them to play those games this season, as well as those in the AHL, compared to DiPietro’s experience? That remains to be seen.

DiPietro, at least, isn’t planning on letting a lost year of development slow his plans for making the NHL.

“I know that Mike DiPietro's goal is going to be to come to camp and make the team because that's built into his DNA,” said Clark. “He is aiming for the top every day of his life. That's the way he wakes up every morning and that's what his goal will be.”

Will he be able to do it? The odds are certainly stacked against him, but Clark knows where he’s putting his money.

“I would never, ever think about betting against Mike DiPietro as a goaltender,” said Clark.

Ian Clark on the diminishing returns of size for goaltenders

As an addendum, Clark spoke on the Halford and Brough show about an aspect of DiPietro’s game that some believe will hold him back: his size.

To be fair, DiPietro isn’t exactly tiny. He’s 6’0”, which is three inches taller than the average Canadian male. By NHL goaltending standards, however, DiPietro is well-below average.

Clark doesn’t think that will hold him back.

Clark admitted that if he was picking a goalie purely on size, he’d aim for one that was 6’3” or maybe 6’4”. But, he added, that’s just one of many elements of elite goaltending.

“In a case like Michael DiPietro, you've got a guy who grades 10 out of 10 on competitiveness, his instinctive ability to find creative solutions in tough moments, his ability to to be patient on his feet and react to protect his outside and his periphery, and obviously the mental capacity of the game is a huge part,” said Clark.

He pointed to undersized goaltenders like Juuse Saros and Jaroslav Halak as players who rate highly in other elements of the game to make up for their lack of size. Among goaltenders with at least 20 starts this season, Saros was fourth in save percentage at .927, while Halak has had a long career with a very solid .916 save percentage in 539 games.

Clark pointed to how even large goaltenders face challenges because of their size.

“It's one thing when you're out on top of your crease or near the top of the paint,” said Clark, “but you get down into the post areas and you're trying to get under control and organized around those post areas, it can be very challenging. In fact, it was one of the biggest things that Jacob Markstrom and I worked on during our time together was being able to navigate those small spaces.

“Not only do they have long legs, they've got big skates and big feet, and they're really trying to coordinate those entries to their post, and it can be challenging.”

It’s an intriguing look into the unique challenges each goaltender faces. As to what DiPietro has been working on with Clark, he spoke to some areas in his conversation with Ben Kuzma.

“It’s a few things,” added DiPietro. “Going back to my rookie season in the AHL, we really wanted to work on traffic management and my stance adjustments in high, medium and low. As that progressed, it was more getting tighter with my post play, extensions, reverse tracking and shorter shuffles to make sure I have lighter feet. You slowly chip away at these things and you don’t forget them. It’s like checking off boxes.”

Hopefully, next season DiPietro has more chances to integrate all of those checked boxes into games.

Ian Clark wondered if he would be back in Vancouver before hard push by the Canucks
Jun 11, 2021 3:05 PM