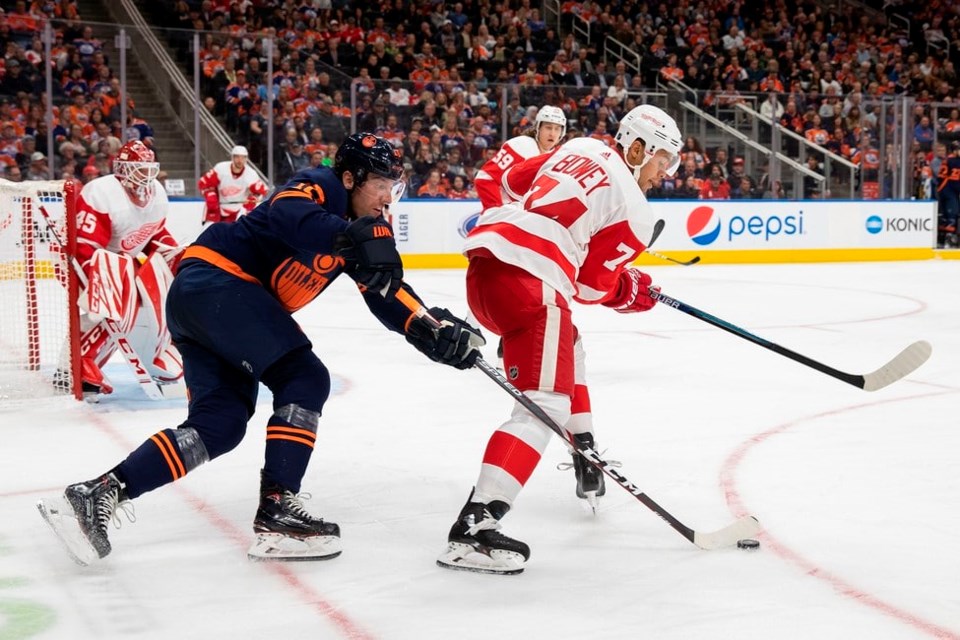 Madison Bowey of the Detroit Red Wings has his pocket picked by James Neal of the Edmonton Oilers.Codie McLachlan / CP

The 2021 NHL trade deadline brought something very familiar to the Canucks under Jim Benning’s regime as general manager: reclamation projects.

By the end of trade deadline day, via three different trades, the Canucks had acquired a fifth-round pick, a sixth-round pick, and two 25-year-olds who may or may not be NHL players: defenceman Madison Bowey and winger Matthew Highmore.

Four years ago, Highmore was a coveted undrafted free agent out of the QMJHL after scoring 89 points in 64 games, then helping lead the Saint John Sea Dogs to the QMJHL championship. His blazing speed, high work rate, and nose for the net served him well in his first year of pro, as he broke a rookie record with the Rockford IceHogs with 24 goals in 64 games.

In the intervening years, however, Bowey and Highmore have failed to establish themselves as full-time NHL players.

After parts of two seasons in the Capitals lineup, Bowey was traded to the Detroit Red Wings, essentially as a throw-in with a second-round pick for Nick Jensen. Bowey struggled so much with the Red Wings that they didn’t even qualify him as a restricted free agent and he went into the 2020-21 season without a contract.

The Blackhawks signed Bowey after the season already started to a bargain-basement two-year contract and waived him immediately to put him on the taxi squad. He’s played all of two games for the Blackhawks this season.

That’s quite the fall from grace for Bowey — from potential top-pairing defenceman to not even cracking the lineup for a mediocre Blackhawks squad.

Benning, however, sees some potential for more.

“He’s a big, strong kid. He’s got all the physical tools to be a real good player,” said Benning. “He’s a good skater. We just felt like he gives us some size and strength on the back end.”

Physical tools are all well and good, but the actual on-ice results have been ugly for Bowey at the NHL level. With all of his size and strength, Bowey isn’t able to prevent a cavalcade of scoring chances from all around the crease, so what does that size and strength matter?

Benning acknowledged that there were some ulterior motives for acquiring Bowey when it comes to the expansion draft. Because Bowey has played 55 NHL games over the past two seasons and is signed through next year, he satisfies exposure requirements for the Seattle Kraken expansion draft, allowing the Canucks to protect someone like Tyler Myers.

“That was part of it,” said Benning, “but we liked him as a prospect. He’s played in the league, we like him as a player. We’ve got some UFAA defenceman on the back end that may not re-sign with us, so I think it gives us protection going forward.”

At 25, Bowey is pushing the boundaries of what might be considered a prospect, particularly when he already has plenty of NHL games played to assess his capability to stick at this level.

If Bowey is a legitimate part of the Canucks’ plan to fix their defence, that’s a serious cause for concern. If they instead see it as a roll of the dice on a player with a cheap cap hit who might still figure things out, then there are far worse gambles. After all, it only cost the Canucks dropping down from the fourth round to the fifth at the 2021 draft.

Highmore certainly played more than Bowey for the Blackhawks this season but was still a frequent healthy scratch. His path to the NHL has been rocky.

After an excellent rookie AHL season, his sophomore season was derailed by a shoulder injury that required surgery. The following season, Highmore bounced between the NHL and AHL but was in the lineup for the Blackhawks in the playoffs, recording 3 goals and 4 points in 9 games in the bubble.

It didn’t seem to be a sign of things to come. Instead, Highmore has languished on the fourth line for the Blackhawks when he’s been in the lineup at all. He has no goals this season.

According to Benning, they’re not looking at Highmore to provide offence.

“We really like him. We’ve seen him in the bubble, he’s a guy with a lot of energy, a lot of passion for the game,” said Benning. “We kind of had our eye on him ever since he was a junior free agent when he signed with Chicago. We like the intangibles that he brings.”

More than that, Benning suggested that Highmore would be a better fit with the Canucks than Gaudette.

“We felt like Matthew Highmore plays a more complete two-way game,” said Benning. “He’s a guy that gives us speed and I think, given an opportunity, he can score too.”

If Highmore is a better two-way player than Gaudette, it’s by the barest degree and evidence of him being able to score at the NHL level is also lacking. He could, however, be a cheap option for the Canucks’ bottom-six, something the team needs given their current cap conundrum.

What’s truly troubling, however, is how Benning sold so low on Gaudette, who had a career-low in shooting percentage and one of the lowest on-ice shooting percentages in the entire NHL. In other words, the puck just wouldn’t go in the net for either him or his linemates, even though he was able to create a decent number of scoring chances.

When asked directly about selling low on Gaudette, Benning said that the young forward didn’t progress enough this season.

“Maybe a change of scenery, he can get that back...The thing that we may miss from him is he’s got a good release on his shot, he can score from the outside.”

With the Canucks, Gaudette was an offensive-minded bottom-six forward with no other offensive-minded players to play with. There was certainly an argument to move on from Gaudette but doing so when his value was at its lowest feels like the wrong move.