The Vancouver actor “would do anything” to get Auston Matthews on the Canucks.
Apr 11, 2021 5:55 PM By: Daniel Wagner

Does Ryan Reynolds harbour a hidden desire to be an NHL general manager?

Taking the helm of an NHL team would be a significant pay cut for the movie star but the actor is a big fan of his hometown Vancouver Canucks and has previously — jokingly — begged to take the ice for the Canucks as a player.

Perhaps Reynolds would be better suited for a front office role with the Canucks. He’s already involved in sports in an ownership role after buying Welsh soccer team Wrexham AFC with fellow actor Rob McElhenney.

According to Reynolds himself, however, the Canucks would be “stupid” to hire him as GM. He said so on an Instagram post by Toronto Maple Leafs star Auston Matthews.

The day after racking up a hat trick in a four-point night against the Ottawa Senators, Matthews shared photos from his performance, showing that he was using a special stick and skates during the game in support of the SickKids Foundation.

Naturally, when Matthews posted on Instagram about his SickKids skates and stick, Reynolds had to comment with some support for his buddy.

“Absolute legend on and off the ice,” said Reynolds. “If the Canucks are ever stupid enough to let me become GM, I’ll do everything in my power to get you on the team.”

Pursuing a big name and one of the NHL’s best goalscorers for his first move as Canucks GM? That doesn’t sound so bad. But then Reynolds kept going.

“Even if I have to move the team to Toronto,” he continued. “See? I’m already the worst GM in history.” 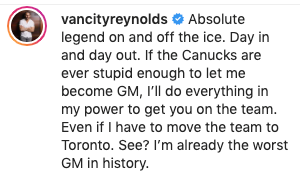 Reynolds would definitely no longer be Vancouver’s favourite son if he moved the Canucks to Toronto.

Matthews had just one response for Reynolds, along with a crying laughing emoji: “I would stick to acting if I were you.”