In pole position in the Pacific, can the Canucks get even better down the stretch?

“Everything’s magnified as the season progresses.”

The Canucks are on a roll: they're the hottest team in the league, winning 13 of their last 16 games. It’s a hot streak that has seen the Canucks speed into first place in the Pacific Division, with an eye towards creating some separation between themselves and the rest of the pack.

It’s still January and the Canucks have 29 wins; last season, they didn’t pick up their 29th win until mid-March.

Now, however, we come to the crunch. These final 31 games will determine not only whether the Canucks are a playoff team, but also how optimistic fans should be heading into the playoffs. How will the Canucks perform as the stakes get higher and the games get tougher?

“Mistakes are less frequent, guys are mentally more dialed in from shift to shift, and there’s more on the line,” said head coach Travis Green about the rising difficulty of the games. “So naturally, you’re going to see the temperature rise in the games...everything’s magnified as the season progresses.”

The Canucks, at least, have plenty of experience with hard-fought games, as many of their wins have come by thin margins, with the help of some empty net prowess by the Insurance Line of Tanner Pearson, Bo Horvat, and Loui Eriksson. That’s a positive in one sense — it means the team can draw on that experience as the season progresses — but it also means they’re on a razor’s edge in a lot of games, relying on excellent goaltending and timely scoring to pull out victories.

What would make things a lot more comfortable for the Canucks — and their fans, for that matter — is if they could step up their game in these final games and prove that they truly belong among the best teams in the league and aren’t just in pole position in the Pacific because of the shoddy quality of the division.

There are some positive signs in this direction. This is a team that experienced a lot of turnover in their roster over the past year, which can affect team chemistry. It takes time for players to figure out the tendencies of their teammates and know where to put the puck and when to get the most out of each shift, and the team's chemistry seems to have grown immensely from the start of the season.

It also takes time for a coaching staff to figure out the best arrangement of their roster. In recent games, Green made the bold choice to breakup one of the best lines in the NHL, bumping Brock Boeser from the top line with Elias Pettersson and J.T. Miller in favour of Jake Virtanen. The move has paid dividends, with Virtanen thriving in the role, giving the coaching staff a new card to play, even if Green chooses to return Boeser to that line in the future. It also improves the Canucks’ depth: having a player like Boeser on the third line with Antoine Roussel and Adam Gaudette could provide some offensive punch down the lineup.

We can see how the team has improved by looking at their underlying statistics. Specifically, we can use the metric Expected Goals, which is a combination of shot quantity and quality: above 50% means the Canucks are producing more and better chances than their opponents. 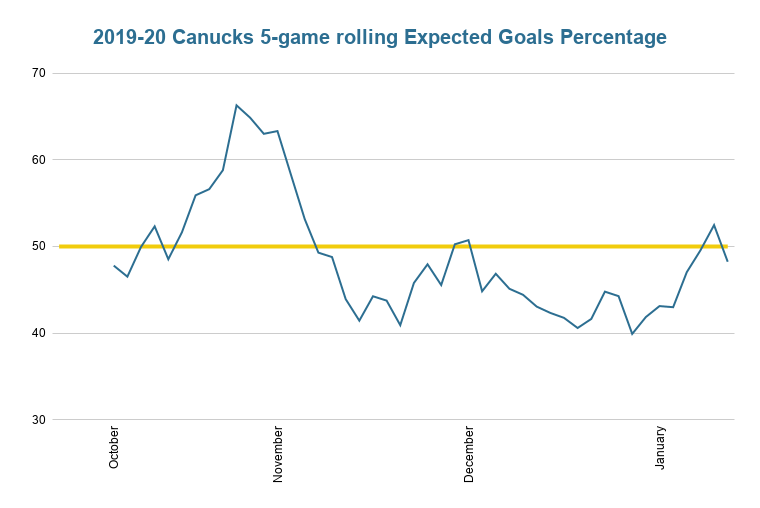 By looking at the Canucks’ 5-game rolling average for Expected Goals, we can see their early excellence against a weaker schedule in October, the crash as they struggled in November and December, and their climb back to above 50% in January. If they can avoid that dip at the end of January turning into another crash, they should be in good shape through the rest of the season.

There are questions, of course: Quinn Hughes has already played more games this season than he played in college, the World Juniors and World Championships combined last season. Will fatigue set in?

With the tighter, more hard-fought games at the end of the schedule, will the Canucks be able to dodge key injuries to top-six forwards and top-four defenceman that they have thus far avoided? If those injuries do come, will the Canucks’ as-yet untested depth be able to step up and deliver?

And finally, will the goaltending tandem of Jacob Markstrom and Thatcher Demko still steal games down the stretch or will they falter? Fortunately for the Canucks, there’s little reason to doubt either goaltender at this point.

4 - After being held off the scoresheet for 17 KHL games, Canucks top prospect Vasili Podkolzin has broken through with points in 4-straight games, setting a franchise record for SKA St. Petersburg for points from an 18 year old.

50 - Just 50 games into the season, J.T. Miller surpassed his point total of 47 from last season with the Tampa Bay Lightning with 48 points. Then he added two more points in game 51. With 50 points now, Miller is just six points away from his career high of 56 points.

A tap of the stick to Elias Pettersson for his mind-blowing 102.4 mph slap shot in the All-Star Skills Competition’s Hardest Shot event. That is the second-hardest shot ever by a forward in the event.

An even bigger stick-tap to Pettersson for what he did with the $10,000 donation to charity he earned from the NHL for his two shots over 100 mph. He donated it to the Parkinson’s Societies of BC and Minnesota, in honour of Brock Boeser’s dad, who lives with the disease.

And one extra stick-tap to Jacob Markstrom, who turned heads with his stunning iridescent suit at the All-Star Game. It turned out there was more to it than just some sick drip for the red carpet: the suit was from a company called Yoyuu, found by Godfrey Gao, a Taiwanese-Canadian model and actor that tragically passed away in November, and Markstrom was wearing it in tribute to Gao.

No one in NHL commentary is going to bring this up, but Markstrom is wearing Yoyuu, which was Godfrey Gao's company. This is the suit Gao featured in his last IG post before his sudden death this fall. Markstrom and Gao were friends. pic.twitter.com/U2phRb0azR