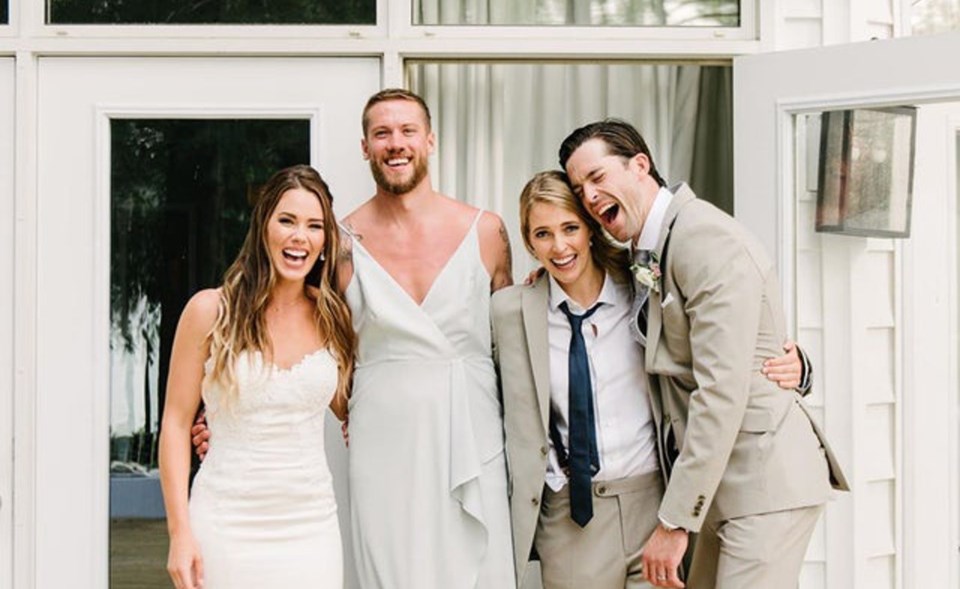 The summer months are prime wedding season for everyone, but particularly for NHL players, who certainly can't get married in the midst of a busy hockey season.

Of course, the COVID-19 pandemic has the wedding industry in a tumult, as engaged couples are postponing or outright cancelling weddings. For some couples, that might mean putting the wedding off for a couple months, but NHL players planning weddings will likely have to wait a full year until the end of the next hockey season.

That likely has Erik Gudbranson and his wife, Sarah, feeling very relieved they got married last year. The former Canuck had at least one current Canuck in attendance at his wedding last summer: Jacob Markstrom, who was one of Gudbranson's groomsmen.

He, along with one of the bridesmaids, surprised the couple with a little switcheroo, swapping Markstrom's suit for the bridesmaid's dress and vice versa. The result? A bride and groom in stitches from laughter and a few priceless photographs.

Sarah Gudbranson shared the photos this week on her Instagram account and, I have to say, Markstrom looks quite stunning.

Happy happy birthday twin and the only person I know that could surprise us looking this damn good in a men’s suit 🔥🔥🔥 love you and your shenanigans! (@markstrom25 you look pretty okay too 😏)

Markstrom looks almost as good in that dress as he looked all season long for the Canucks, at least until he suffered a knee injury in late February. While the suspended hockey season is a major concern, it has given Markstrom extra time to recover from his injury.

According to Jim Benning, Markstrom would be available to play right now if the season came back.

"He's done his rehab," said Benning in an interview on Sportsnet 650. "If we were playing right now, I think he was scheduled to play this weekend. He's ready to go if we start playing again. I know he's worked hard off the ice to get back. He's been on the ice here this last week."

As evidence that his knee is better (and that Alex Edler's occasionally wonky back is feeling strong), take this video of Markstrom and Edler attempting the Australia Challenge, so-called because you're supposed to "down under" your partner's legs.

Markstrom's knee looks like it's holding up just fine. I just hope that Markstrom and Edler are quarantined together, because that doesn't look much like social distancing.

Markstrom and Edler didn't quite get to the "down under" part. For an example of how it's supposed to be done, let's go back to the Gudbransons, who pulled it off with aplomb.

How the All-Star play of Jacob Markstrom has been a constant in a chaotic Canucks season
Jan 24, 2020 9:45 AM
Comments
We welcome your feedback and encourage you to share your thoughts on this story. We ask that you be respectful of others and their points of view, refrain from personal attacks and stay on topic. To learn about our commenting policies and how we moderate, please read our Community Guidelines.