Is it unreasonable to suggest Hughes could compete for the Norris and Markstrom for the Hart?
Feb 13, 2020 1:34 PM By: Daniel Wagner 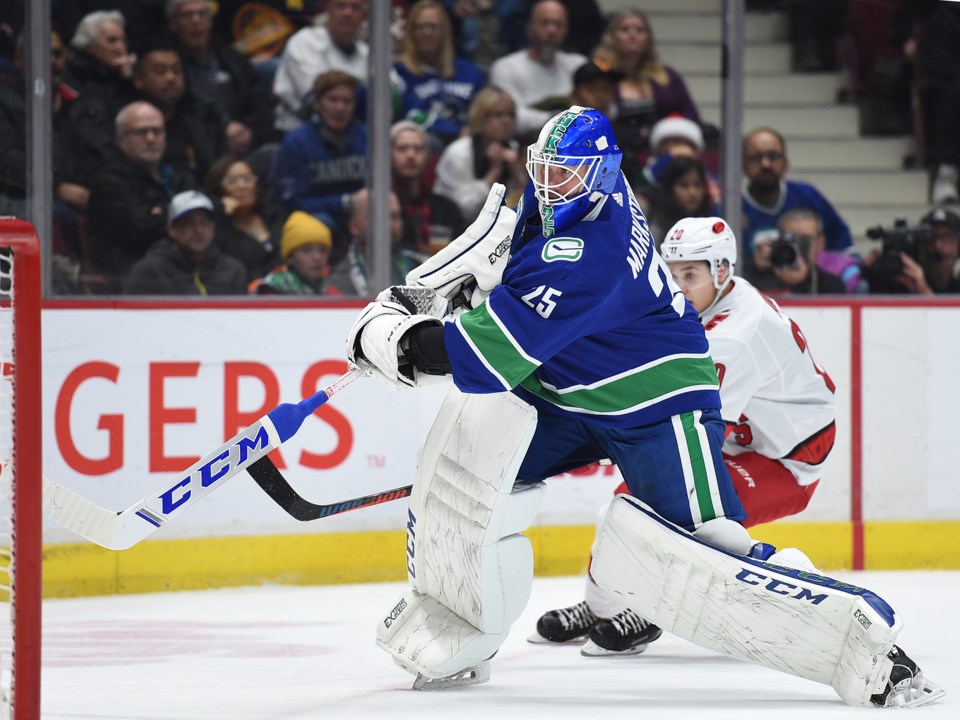 Jacob Markstrom plays the puck away from Sebastian Aho of the Carolina Hurricanes. photo: Dan Toulgoet

Jacob Markstrom has been earning some well-deserved buzz for the Vezina Trophy as the NHL’s best goaltender and his 49-save shutout on Wednesday night won’t quiet that buzz anytime soon. His sterling play this season has him clearly in the top tier of NHL goaltenders, particularly when you dig deeper than just his save percentage.

Meanwhile, Quinn Hughes leads all rookies in scoring with 44 points in 57 games, while also leading all rookies in ice time. He’s gone from being a distant second in the Calder race behind Cale Makar, to narrowing the gap significantly, if not pulling ahead.

If either Markstrom or Hughes win either of those awards, it would be a fantastic accomplishment.

Since the Canucks joined the NHL in 1970, no team has had two Calder winners in back-to-back years. The last time that happened was 1967 and 1968 when Bobby Orr and Derek Sanderson accomplished that feat with the Boston Bruins. Elias Pettersson and Hughes could do it over 50 years later.

Then there’s the Vezina, which has never been won by a Canucks goaltender. Kirk McLean finished second behind Patrick Roy in 1992 and Roberto Luongo was robbed in 2007, finishing second behind Martin Brodeur. That’s the closest any Canuck has come to the Vezina, though Luongo won Alain Vigneault the Jack Adams award in 2007.

So, winning the Calder or the Vezina would be a big deal for Hughes and Markstrom, but what if we’re setting our sights too low? Two comments from Wednesday night’s game suggest that maybe we should be talking about two even bigger awards.

During the second intermission of Wednesday night’s game against the Chicago Blackhawks, Colby Armstrong made the case that Markstrom deserves consideration not just for the Vezina, but for the Hart as well.

“He’s the MVP of their team,” said Armstrong. “I think he’s got to be in the conversation for the Hart, you look where they are in the standings and what they’ve been able to do: Markstrom’s their MVP.”

Since the description of the Hart is “the player judged to be most valuable to his team,” Markstrom can make a strong case. The Canucks are first place in the Pacific Division, despite allowing the most scoring chances against in the entire NHL, according to Natural Stat Trick. As much as the Canucks’ offence would flounder without Elias Pettersson, the Canucks would be in real trouble without Markstrom regularly bailing them out.

Meanwhile, Troy Stecher casually dropped the word “Norris” into a conversation with The Athletic’s Harman Dayal about the team’s improved net-front offence.

“It’s probably no coincidence that when you add a Norris candidate and then bigger bodies, you’re going to get more tips,” said Stecher.

Assuming he’s not talking about one of the other defencemen the Canucks added — sorry, Tyler Myers — Stecher just casually suggested that 20-year-old rookie Quinn Hughes should be in the conversation for the Norris Trophy as the NHL’s best defenceman.

It’s not as outrageous as it might seem on the surface. Hughes is tied for fourth among NHL defencemen in scoring. The only defencemen with more points are John Carlson, Roman Josi, and Victor Hedman.

That’s some heady company for Hughes, including one Norris winner already in Hedman. Beyond the points, however, Hughes has been a major contributor at the defensive end of the ice as well.

Hughes is the only Canucks’ defenceman with a positive corsi — shot attempt differential at 5-on-5 — and we’ve seen how his exceptional skating, which is so useful in transitioning the puck up ice, is also key to his defensive game, allowing him to keep a tight gap and and break up plays.

When you dig deeper into micro-stats — passing data, zone exits, zone entries — Hughes zooms to the top of the NHL. Sean Tierney of Charting Hockey took micro-stats data tracked by Corey Sznajder and ranked all NHL defencemen in several key categories: Hughes is first in the NHL.

Crazy, unbelievable year for young defensemen: Hughes leads *everyone* and Makar, Fox, and Marino are here too.

Lots of usual suspects along with those youngsters. pic.twitter.com/MWYW7eIP26

Hughes excels in all three areas, but particularly at zone entries and shot creation. His ability to transition the puck through the neutral zone then create scoring chances in the offensive zone is at the upper peak of NHL defencemen.

Is that enough for Hughes to get consideration for the Norris? Is Markstrom likely to actually be a Hart contender? While both deserve to be in the conversation, there are several obstacles facing both of them.

For Markstrom, the simple fact is that goaltenders are rarely in consideration to win the Hart. It normally goes to a forward that racks up points and there are several contenders in that category this season. There’s also the complication that he doesn’t rank as highly in traditional goaltending statistics that a large swathe of awards voters still ascribe to.

Markstrom is sixth in the NHL in wins and save percentage among goaltenders with at least 30 games played. The analytics that show Markstrom at the top of the NHL are not widely known or accepted, so it’s easy for voters to ignore them and go with someone like Andrei Vasilevskiy or Connor Hellebuyck for the Vezina, let alone the Hart.

In this final stretch to the playoffs, perhaps Markstrom could change that conversation, but it will be a tough hill to climb.

As for Hughes, the complication is again that the analytics that show him among the NHL’s best defencemen, apart from his point totals, are not widely known or accepted. It will also be difficult for him to attract attention for his points when Carlson and Josi are both at or above a point per game.

He’ll also have to battle the stigma attached to a small, offensive defenceman. THose that don’t regularly watch him play might think he can’t play in the defensive zone, and they might point to his minus-4 plus/minus or even his zone starts that skew more to the offensive zone. Hughes also rarely plays on the penalty kill.

Opening up the topic, pointing out Hughes’ well-rounded game, and getting him into the Norris conversation this early in his career will only help his possibility to win it in the future, however.

At the very least, the fact that this conversation isn’t utterly ridiculous should strengthen each of their cases for the Calder and Vezina.

IWTG: Markstrom marks the occasion of the Sedins’ jersey retirement with 49-save shutout over the Blackhawks
Feb 13, 2020 9:49 AM

Quinn Hughes is not a generational defenceman (and neither is Rasmus Dahlin or Cale Makar)
Jan 21, 2020 4:34 PM
Comments
We welcome your feedback and encourage you to share your thoughts. We ask that you be respectful of others and their points of view, refrain from personal attacks and stay on topic. To learn about our commenting policies and how we moderate, please read our Community Guidelines.