Just two GMs with a 7+ year tenure over the last couple of decades have a worse regular season record than Benning.

Generally speaking, there isn’t much job security among general managers in the NHL. Half of the GMs in the league have only been in their current positions for three years.

It’s understandable. Sports is a results-oriented business — if you’re not winning, you’re in trouble. There are only 32 NHL GM jobs available and there must be more than 32 people in the world capable of doing the job, so if an owner doesn’t like the results one GM is getting, he can fire that GM and have dozens of people lining up to replace him.

Some GMs, however, last longer than others. That’s the case for Vancouver Canucks GM Jim Benning, who is the second-longest tenured GM in team history behind only Pat Quinn. Benning has been on the job for seven years and, despite the displeasure voiced by some of the fanbase, is entering his eighth year.

It seems unusual that a GM whose team has missed the playoffs in five of the last six seasons would get a vote of confidence from ownership and stay on the job, but is it all that unusual? To answer that question, I figured I would actually look up all the GMs in the past two decades whose tenure lasted at least seven years to see how well their teams performed and whether Benning’s situation is abnormal.

The two GMs to whom you least want to be compared

It’s very rare for a GM to last that long with a sub-.500 record in the regular season as Benning has. In fact, just two GMs with 7+ years on the job have worse records than Benning.

Those are not the type of names you want to be associated with when it comes to NHL GMs. Milbury and Maclean are widely considered to be two of the worst GMs in NHL history. 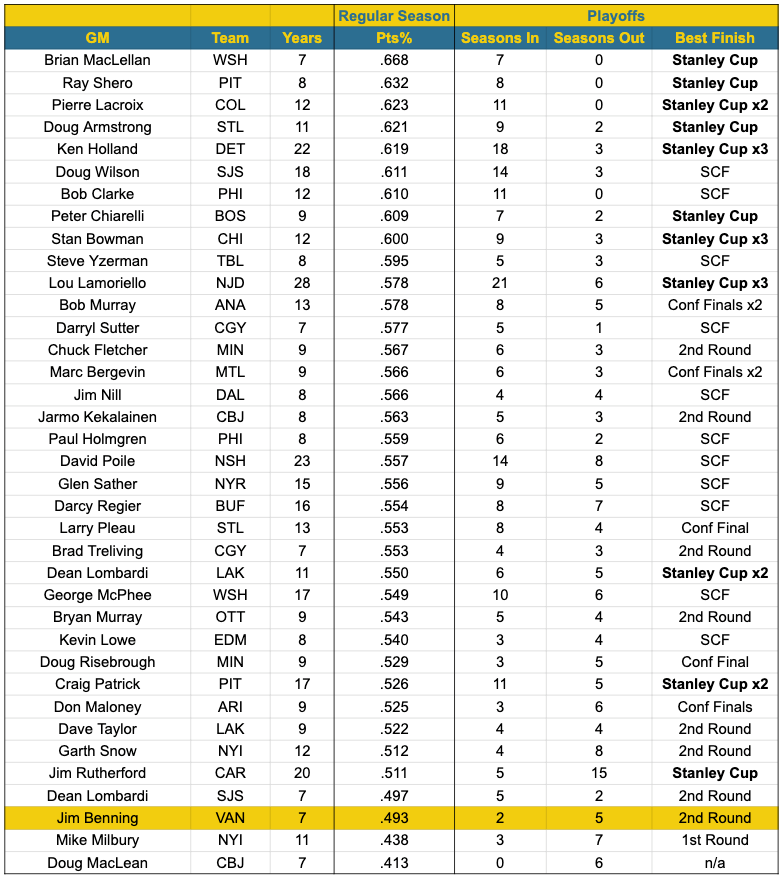 NHL general managers with 7+ years on the job over the last twenty years.

MacLean is the only GM on this list who never made the playoffs. He infamously selected Gilbert Brule over Anze Kopitar at the 2005 draft, saying, “How do we go with the Slovenian ahead of the Canadian?” That was one of many draft blunders for MacLean, among many other missed opportunities and bad deals. He was even their head coach for a year while still trying to be the GM and President.

Where other expansion teams were able to find success a lot faster, MacLean was unable to do so.

Milbury, on the other hand, was an utter disaster as a GM and it’s baffling that he lasted eleven years in Long Island.

He traded the second-overall pick in 2001, who turned out to be Jason Spezza, along with Chara to the Senators for Alexei Yashin, then signed him to a monster 10-year deal that eventually had to be bought out.

All told, Milbury got the Islanders to the playoffs just three times in 11 years and never got past the first round.

Benning can’t possibly be as bad a GM as Milbury and MacLean, but it’s certainly stunning to see those two names emerge just below Benning’s on this list. At the very least, Benning’s drafting has been better than MacLean’s and he hasn’t traded away as many future stars as Milbury. Hopefully the Canucks can improve their record next season and Benning can climb a little higher on the list.

There’s still, however, the record of making the playoffs to consider.

Missing the playoffs in 5 of 7 years

The Canucks made the playoffs in Benning’s first season as GM, bouncing back after the Tortorella-coached season. They then missed the playoffs for four-straight seasons before sneaking into the playoffs in 2020 and going on a run to the second round on the backs of goaltenders Jacob Markstrom and Thatcher Demko.

Missing the playoffs in so many years wouldn't have stung so badly if Benning and the Canucks had committed to a rebuild in those years. Instead, they kept pushing for the playoffs and failing.

It should come as no surprise that GMs who stay on the job for 7+ years tend to make the playoffs more often than they miss the playoffs. Aside from Milbury and MacLean, however, there are a few other GMs with a similar record of making the playoffs in this group as Benning.

One is Doug Risebrough, who was the first GM of the expansion Minnesota Wild and got them to the Conference Final in only their third season, so that earned him some extra rope.

Don Maloney and Jim Rutherford, GMs of two teams relocated to southern markets, likewise got a lot of leeway because they were working with smaller budgets. Maloney even won a GM of the Year Award in 2010, as his peers recognized him for getting the Coyotes back to the playoffs with a plethora of savvy moves.

Rutherford, meanwhile, missed the playoffs a lot with the Carolina Hurricanes, but he also got them to two Stanley Cup Finals, winning the whole shebang in 2006. Those wildly successful seasons were outweighed by far too many seasons out of the playoffs, but getting to the Cup Finals on a budget tends to keep you in good graces.

Garth Snow and Kevin Lowe likewise missed the playoffs more than they made them. Lowe, at least, got the Edmonton Oilers to a Stanley Cup Final, losing to Rutherford’s Hurricanes.

Snow, meanwhile, was better than Milbury with the Islanders but exacerbated one of Milbury’s biggest mistakes by signing Rick DiPietro to a mammoth 15-year contract that is widely considered to be one of the worst contracts in NHL history.

DiPietro was bought out in 2013 as a compliance buy out, meaning he wouldn’t take any money off the Islanders’ salary cap, but they’ll still be paying DiPietro $1.5 million per year until 2029.

Obviously, it would be far preferable to be at the top of a list like this. What stands out is that the GMs with the most regular season success also had the most playoff success. The top-ten GMs here all got to the Stanley Cup Final, with all but three winning the Cup.

Of course, every GM’s situation is different. Some of the GMs took over teams that were already very good, like Brian MacLellan and Ray Shero, while others took over at the start of a rebuild. But, for the most part, they didn’t keep their jobs long if they didn’t win games and make the playoffs.

Can Benning set the Canucks up for that kind of consistent regular season success that gives them as many chances as possible to win the Stanley Cup?