Pacific Pool Party: He who has half a nose

The Canucks are the best team in the Pacific Division, but how much does that mean when the entire division is treading water?
Jan 28, 2020 9:10 AM By: Ryan Lambert 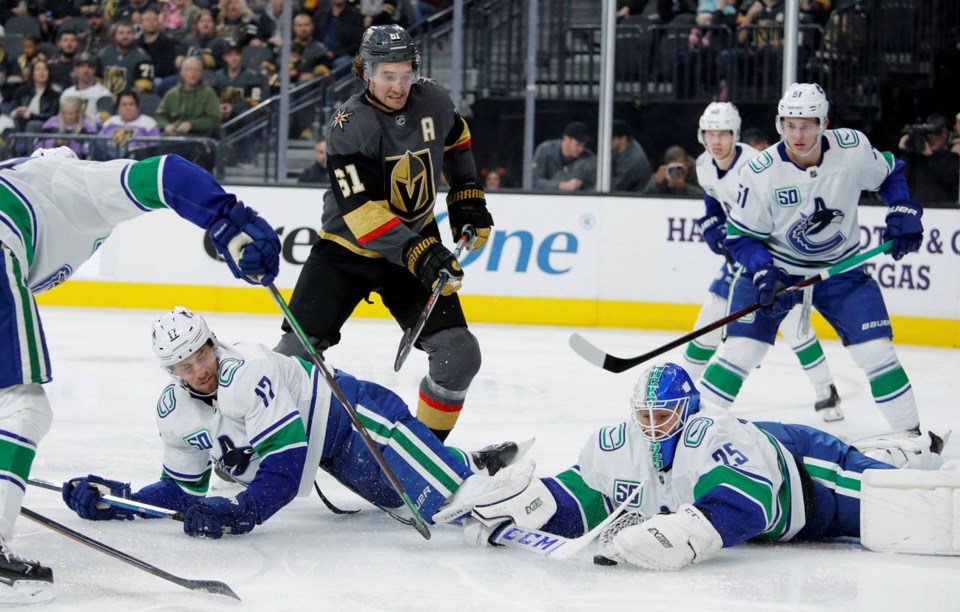 Pacific Pool Party is a weekly column where Ryan Lambert breaks down (and belittles) the battle for the playoffs in the Pacific Division.

Coming out of the All-Star break, the Canucks had the best points percentage in the Pacific Division, which is where you want to be with 30-something games left in the season.

The problem, obviously, is that the points percentage in question — .600 after their win over the Blues — is good but not great. It’s good for just 12th in the entire NHL. You can see the problem here: Being one of the three best teams in the Pacific guarantees you a playoff spot, but little more than that.

Put another way, when you’re the toughest kid in your middle school, most of the guys down at the bar down the block would still kick your ass and walk away laughing. Unfortunately for the Canucks, and the Oilers, and the Flames, and the Coyotes, and the Golden Knights (all separated by a single point in the standings at the All Star break), getting into the playoffs comes with a fairly large likelihood of getting whaled on by the better teams in the Central Division.

What’s kind of amazing is that because the top teams in the Central are so dominant, and the other four so bad, it’s still shaping up to be a five-team playoff outcome for the Pacific. That’s where things get interesting.

The only Pacific teams truly safe from carnage in the postseason that’s now a shade under three months away are the division’s 2 and 3 seeds; they at least get to face a team roughly as mediocre as themselves. No such guarantees for the division’s winner — who might face a surging Central foe (and it would require a surge to overcome the Pacific’s traffic jam) — or certainly the last playoff seed, who would draw the winner of the Central.

Of course, wins aren’t everything. You have to look at underlying numbers and things of this nature when evaluating teams and, hey, look at that: By expected-goals share in all situations, the Golden Knights are the fourth-best team in the league. Can they get a save from any of their goalies, one of whom is 35 and the other is a career AHL/NHL tweener? Well, no, but they have a new coach and that might help turn things around, right? I mean maybe, except he couldn’t make it work with the Sharks because he also had big goalie problems there, but...

Okay, surely there’s someone else in the Pacific where the underlyings are encouraging and portend better things than getting dusted by the first Central Division team they come across. Well, hey, there was another Pacific team in the top half of the league by xGF share at the break and … ah crap, it’s the Kings. They’re currently dead last in the West. At least the Coyotes and Oilers were straddling the break-even point at 14th and 15th. Sure, it’s by hundredths of a point in either direction, but that’s SOMETHING.

So the question is: Which teams do we really believe in here? You don’t really have to be all that good, you just have to be better than the other teams that are all on pace for something like 90-94 points.

The Canucks started the season really well by expected-goals, but they’ve really run into problems with it for the last… three months? Yeesh. Okay. At least they’re in the catbird seat in terms of wins because they’re now three points up on their rivals and everyone behind them (save Edmonton) has played as many or more games. That may not mean anything in the end because the margins are really thin here, plus strength of schedule, home-road splits and travel, games in the division, blah blah blah.

They have talent you can believe in at every position, though perhaps not as much of it as you’d like to really make the case for them. The nicest thing you can say about the Canucks, speaking of pace, is that they’re on a 97-point one. They would have to stumble big-time down the stretch to not make the playoffs. Coming into the season, I projected them at 90 points, one shy of what I thought would be the cut line. That latter number (91) is looking pretty solid, but the Canucks are well-positioned to stay above it, even if their underlying numbers continue at the diminished quality seen since November started. It’s not particularly good, but it’s not bad enough to sink them, either.

Then there’s Vegas, the aforementioned dominant team with a case of real goalie problems. We saw last year a Peter DeBoer-coached team can outplay those kinds of problems (at least until the playoffs start). With just the power of their top two lines — plus the team’s tendency to really Go For It at the trade deadline — it’s easy to see the case for them making it, too. Of course, it’s just as easy to see Marc-Andre Fleury, who has a ton of miles on him at the NHL level, never get it back on track, so that’s the obvious word of caution.

Then, I dunno, Calgary? Again, elite talent at all positions, and maybe not Vegas-level depth, but they’re certainly deeper than Vancouver is. Should you be betting big on a huge stretch run from Dave Rittich and Cam Talbot? Not really, but then again, things have been pretty solid since Geoff Ward took over (13th in the league by xGF share, seventh by points percentage). They seem to have the staying power that comes with talent and not having a coach everyone hates.

That’s three teams that make sense for the playoffs: Canucks, Golden Knights, and Flames. After that it gets real dicey, real fast.

Edmonton has McDavid and Draisaitl, which makes them tough to count out except for the fact that they’re still the Oilers. Arizona has some serious goalie-injury problems that won’t last forever; if Darcy Kuemper comes back at 100 percent, it could prop them up even as the rest of the team continues to be sub-mediocre.

As for everyone else, uhh, I guess it’s fun to be able to play spoiler, right? And they could, too! San Jose and Anaheim have enough quality at key positions that they’re gonna win plenty of games they “shouldn’t” and keep things interesting. And the Kings, well, there’s always… hm, not next year. How about, “There’s always 2021-22 at the earliest!”

Obviously, the briefer version of this column is, “To find out the teams making the playoffs out of this bad division, pick any of the five teams in the big jumble right now, probably include Vancouver, and that’s a perfectly acceptable answer.”

Look, if you came here looking for definitive answers about who was gonna emerge from the Pacific, you have bigger problems than the answer being, “You figure it out.” But: You figure it out.

With the firing of Gerard Gallant comes a reminder for NHL coaches: never win the Jack Adams
Jan 15, 2020 11:34 AM

PHWA mid-season awards show Quinn Hughes has a lot of work to do if he wants to win the Calder Trophy
Jan 23, 2020 10:02 AM
Comments
We welcome your feedback and encourage you to share your thoughts. We ask that you be respectful of others and their points of view, refrain from personal attacks and stay on topic. To learn about our commenting policies and how we moderate, please read our Community Guidelines.