The Vegas Golden Knights were expected to be the class of the Pacific Division, but instead they're down in the trenches with everyone else.
0
Feb 11, 2020 9:29 AM By: Ryan Lambert 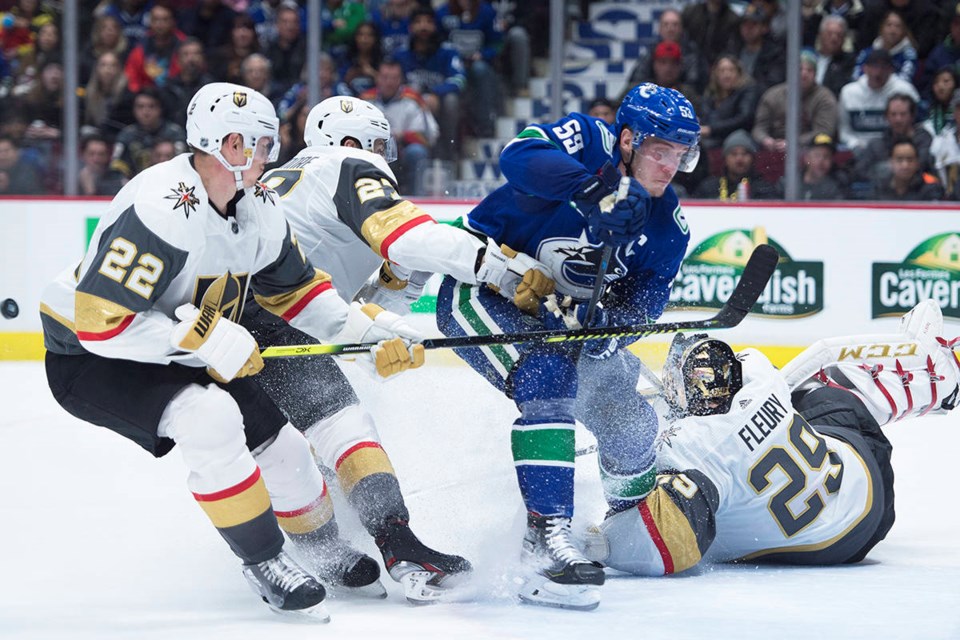 Pacific Pool Party is a weekly column where Ryan Lambert breaks down (and belittles) the battle for the playoffs in the Pacific Division.

On paper, it’s fairly inarguable that the Vegas Golden Knights have the most talented roster in their division. They boast two lines that would be as good as, or better than, the first line for most other teams in the entire league, plus one or two more guys who would be convincing top-six forwards for any other club as well.

There are also a couple of defenders that are in the top-pair territory, but crucially, maybe only one that’s not at least a top-four guy or close to it.

In net, well, there’s a problem. Marc-Andre Fleury has the bona fides to hang with anyone in the division save for John Gibson, but he’s having a bad season. That’s in part because he’s in his mid-30s and has been playing in the NHL for, like, 15 years; there are a lot of miles on that body. Add in the fact that, like a number of teams with playoff aspirations this year (Toronto, Minnesota, San Jose, etc.), they saw they had a backup goaltending problem but didn’t actually do anything to address it.

No surprise, then, that when taken together this is the best 5-on-5 expected-goals team in the league, with a top-three power play and tied-for-13th penalty kill. Things don’t always work out like the xGs say they will, obviously. Which is why Vegas’s position as a playoff team is tenuous at best. They're currently in third in the Pacific, but tied in points with the Calgary Flames right behind them and only one point up on the fifth-place Arizona Coyotes.

They have all those positives in just about every game state, in terms of how well they dictate play, but not as much to show for it as anyone in Vegas would like. That, obviously, is a big part of the reason the team went from their Jack Adams-winning coach to the guy who got canned by their archrival a few weeks prior. Just as their xGs per hour are solid in just about every category you can come up with, so too are they underperforming those numbers in terms of converting quantity and quality of shot attempts into actual goals, or preventing them at the other end.

They rank in the low 20s in shooting percentage at 5-on-5 and on the power play. Same for save percentage on the PK, but at 5-on-5, it’s even worse: bottom-five in the entire league.

While the dissed-and-dismissed Gerard Gallant might have had some level of loyalty to Fleury and backup Malcolm Subban, Pete DeBoer doesn’t have to be so deferential. He knows his new team, like his old one, is in a tough position that few NHL teams find themselves in: it’s not enough to just let the goalie see it and stop it anymore. Instead, he has them committing to blocking shots at a higher rate so that there just aren’t as many attempts getting through to those goalies in the first place.

I’m sure there are some things that could be done to tweak and improve power play and full-strength offensive performance, as well, but those are the kinds of things that get a little mystical. Be around the net more, don’t look for that last pass and just put the puck on net, that sort of thing. Whether they actually work doesn’t always seem to be an area over which even the most skilled guys have control 100 percent of the time.

But blocking shots? That’s a fix that might work. If you’re getting sticks, skates, and shin pads into shooting lanes, sure that might result in an extra deflection goal here and there, but it also probably cuts down on the number of pucks getting to the net in the first place. And because you can’t count on these guys to make a save, well, you take what you can get.

Blocking shots is like killing rats. Doing it is preferable to not, but if you’re doing it all the time it suggests you have bigger problems

The saying about blocking shots is that you want to be good at it, but if you’re doing it too much, it’s a problem. When DeBoer took over, Vegas was close to the bottom of the league in the number and percentage of shot attempts they blocked (24.3 percent at full strength, 24 percent on the PK), which makes sense to some extent because the team was controlling play more than most. But if a too-big percentage of unblocked shots are ending up in the back of the net, a very easy solution (in theory) is to make sure fewer go unblocked.

Since DeBoer, there has been what you’d call a big turnaround. Granted it’s a small sample of just eight games, but Vegas’s penalty killers now block a higher percentage of shot attempts on the PK than any other team in the league (north of 40 percent), but there’s been no real change at 5-on-5 (23.7 percent). That’s resulted in a decline of almost 1.5 goals against per 60 on the PK, and a slight decline in (0.09, probably just noise) at 5-on-5.

Marginal improvements are nonetheless improvements. The job of a coach is to identify weaknesses and address them, and it’s clear DeBoer has at least begun that work. Whether that holds up, or makes a difference over the remaining 25 games of the season is a whole other question. They have arguably as much talent as anyone in the Western Conference but they haven’t put it to good enough use specifically because of the goaltending, about which they probably can’t do all that much short of a major trade, which seems unlikely.

The problem for everyone else in the Pacific, and the whole Western Conference, is that all this team needs is an opportunity, because if the goalies get even a little bit hot, that might just wrap everything up. The problem for the Golden Knights is that seems less likely by the day.

In pole position in the Pacific, can the Canucks get even better down the stretch?
Jan 30, 2020 10:56 AM
Comments
We welcome your feedback and encourage you to share your thoughts on this story. We ask that you be respectful of others and their points of view, refrain from personal attacks and stay on topic. To learn about our commenting policies and how we moderate, please read our Community Guidelines.