The 2020 Calder Trophy battle is a preview for the future of the Norris Trophy.

Despite leading all rookies in scoring this season, Quinn Hughes was still the underdog in the Calder Trophy race. Sure, he was the first defenceman since Brian Leetch and Bobby Orr to win the rookie scoring race as a defenceman, but Cale Makar had a few basic arguments in his favour: more goals and a higher points-per-game.

In midseason voting, Makar was the runaway leader for the Calder, with a first-place vote on 101 out of 117 ballots. By the end of the season, Hughes narrowed that gap with a fantastic finish to the season, posting 19 points in his final 18 games, but it wasn’t quite enough to overtake Makar in the minds of the voters for the Calder, the Professional Hockey Writers’ Association.

It’s a tough break for Hughes, who was certainly deserving of the award, and a missed opportunity at history. If he had followed in Elias Pettersson’s footsteps to win the Calder, it would have been the first time since 1968 that a team had back-to-back Calder Trophy winners, when Orr and Derek Sanderson won in back-to-back years for the Boston Bruins.

Although Hughes fell short to Makar this year, this is really just Round One of what should be a spirited fight for the Norris Trophy as best defenceman in the NHL over the next decade.

The three finalists for the Norris Trophy this season — Victor Hedman, Roman Josi, and John Carlson — are each 30 years old, or will be by the end of the year in Hedman’s case. While they each still have long careers ahead of them and could be Norris contenders for a few more years, the next great group of defencemen is under 23 and ready to take over.

Hughes (20) and Makar (21) are the headliners right now, finishing fifth and seventh among NHL defencemen in scoring this season, and either one could win a Norris Trophy in the near future. Makar garnered 2 fourth-place and 17 fifth-place votes for the Norris, While Hughes received 3 fifth-place votes. But they’re not even the only rookie defencemen that might be in the mix.

Adam Fox (22) was lights out for the New York Rangers this season and was the only other rookie to get a first-place vote for the Calder Trophy. He put up 42 points in 70 games while posting incredible underlying statistics. There’s an argument to be made that he was even more impactful for the Rangers than either Makar or Hughes were for the Avalanche and Canucks.

Beyond the rookies, there were some incredible performances this season from other young defenceman.

First and foremost, there’s Miro Heiskanen (21), who is currently leading the Dallas Stars in scoring in the playoffs with 23 points in 22 games while playing over 25 minutes per game. It’s been a star-making and, potentially, Conn Smythe-winning performance from Heiskanen, who could very well lead the Stars to the Stanley Cup.

You can’t forget Rasmus Dahlin (20) either. The first overall pick in 2018 had a spectacular rookie season — his 44 points were second only to Phil Housley among 18-year-old defencemen all time — and he put up another 40 points in 59 games in his sophomore season. While he doesn’t have a strong team around him in Buffalo, he’s going to be one of the top defencemen in the NHL for the next decade or more.

That’s not to mention some of the great young defencemen that are just a little older, like Shea Theodore, Zach Werenski, Seth Jones, and Thomas Chabot.

We may well be entering a new era of incredible young defencemen, who are going to make the Norris Trophy race one of the most competitive awards in the NHL. Hughes will surely be among the best defencemen in the league battling for the award if his incredible rookie season, and subsequent playoffs, is any indication.

Of course, while individual awards are nice, what is far more important for the Canucks is the impact Hughes has on the team and their fortunes. When Hughes was on the ice for the Canucks this past season, it’s like they became a different team, one easily capable of transitioning the puck smoothly up ice to create chance after chance. 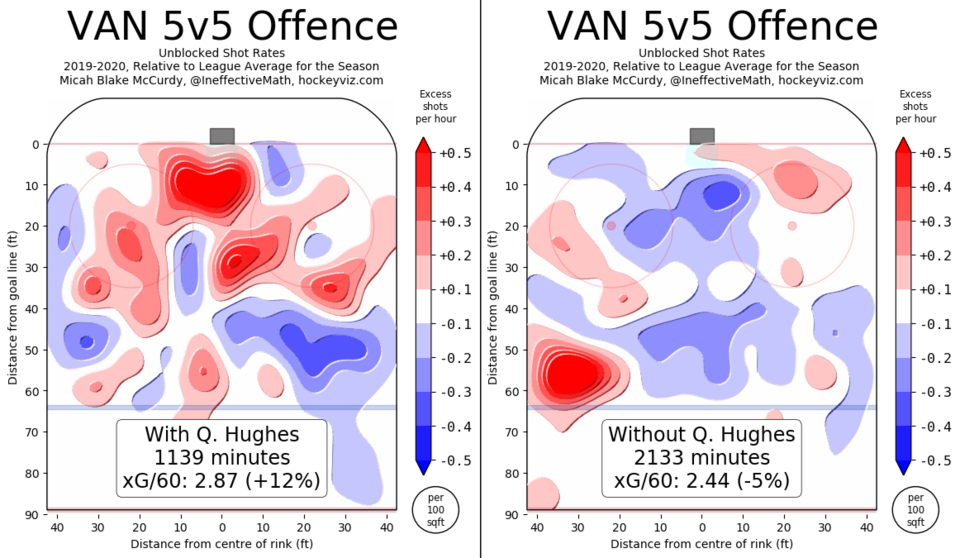 Canucks' 5-on-5 offence with and without Quinn Hughes, via HockeyViz.com

Of course, some might prefer a different type of visual that illustrates how he created some of those scoring chances for the Canucks. In that case, you might prefer this highlight reel.

If Hughes can do all that in his rookie year, he’ll be a massive difference-maker for the Canucks for years to come, whether or not he fills his trophy cabinet with individual awards.