Red flag: When up by one, the Canucks gave up more chances than any other NHL team

Do the Canucks sit back with the lead more than other NHL teams? Uh, yeah.

The Canucks are confident they can build on their success in the 2019-20 season and become a true Cup contender in the near future.

“I think our team is right there and we can win a Stanley Cup in the next couple years,” said Brock Boeser on Thursday. “I truly believe that.”

That confidence is compelling, but confidence alone can only take you so far. It’s important the Canucks address their shortcomings and find tangible ways to get better for next season. And one of the most important ways they can improve is how they defend one-goal leads.

Every Canucks fan has seen it. When the Canucks got a lead this season, they had a tendency to stop pushing the puck forward into the offensive zone and, instead, lapsed into a defensive shell. That lead to some nervous nights when the Canucks would give up a lot of shots while desperately holding onto a one-goal lead.

It was a frustrating tendency, but it’s also not an unusual one when you look around the NHL. Most teams take a more conservative approach to the game when they have a lead. They take fewer chances and cheat back defensively, inevitably giving up more shots on goal while trying to limit quality scoring chances and odd-man rushes.

In analytics, it’s referred to as score effects: when a team has the lead, they tend to get out-shot by their opposition. It’s a combination of the opposing team pushing harder to get a goal back when they’re down and the defending team sitting back, with less pressure to score.

If this is a league-wide tendency, are the Canucks any worse than the rest of the NHL? Do they sit back more than other teams?

Let’s start by looking at heat maps from HockeyViz. These particular heat maps use a statistic developed by Micah Blake McCurdy called Threat, which he debuted at the 2018 Vancouver Hockey Analytics Conference. It measures how “threatening” a shot is based on where the shot is from on the ice. These heat maps show where these shots came from for and against the Canucks in different situations, whether trailing, tied, or leading the game.

There are a few things that jump out. When down by one or two goals, the Canucks were quite good at creating scoring chances from dangerous areas of the ice, particularly right in front of the net. Defensively, they were mostly fine in those situations, though a lot of other NHL teams didn’t give up as much defensively, a sign of how the Canucks were not always the best at holding possession in the offensive zone.

Where things get a little ugly is when the Canucks are leading by a goal or two.

Up by one, there’s an awful lot of red in front of the Canucks’ goal, in the slot, and around the faceoff circles. The Canucks gave up shots that are 21.5% more dangerous than league average when leading by one goal.

That shouldn’t be surprising to the average Canucks fan. That’s what fans saw all season, as Jacob Markstrom and Thatcher Demko seemed to face a barrage of grade-A scoring chances any time the Canucks were trying to defend a one-goal lead.

How does that compare to the rest of the NHL? I compared the Canucks’ defensive Threat to every other NHL team during the regular season. The Canucks don’t compare particularly well. 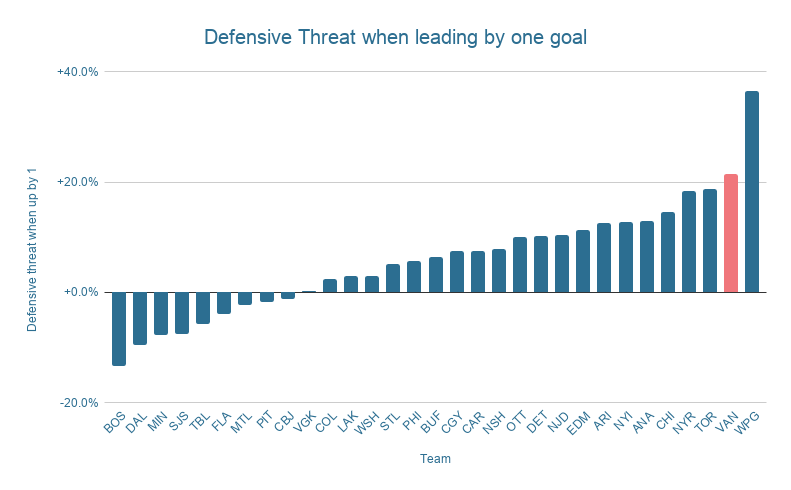 Defensive Threat when leading by one goal. Data from HockeyViz.com

Only one NHL team allowed shots that were more threatening when leading by one goal: the Winnipeg Jets.

Let’s just say that the Jets were a special case, depending on their goaltender, Connor Hellebuyck, to an extreme degree. Their performance when leading by a goal is an absolute indictment on their defensive game and their coaching, as their transition game out of their own zone was nearly non-existent.

The one positive you can say about the Canucks when leading by one is that they are nowhere near as bad as the Jets.

Still, the Canucks gave up far too many shots from dangerous areas when leading by one. Why does this matter? While this statistic isn’t everything — no statistic is — it seems notable that both the Dallas Stars and Tampa Bay Lightning, the two teams currently meeting in the Stanley Cup Finals, are in the top-five.

Yes, there are a few more unusual teams up near the top. The San Jose Sharks stand out, though they were sunk by atrocious goaltending. The stingy Minnesota Wild are not necessarily a surprise, but the Florida Panthers and Montreal Canadiens might be a little bit better than others expect.

Let’s take another look at this using hockey analytics site Natural Stat Trick. Again, we’re mainly interested in shot-based statistics against: shots taken by opposing teams when the Canucks are up by one. When we look at how the Canucks rate defensively, they repeatedly show up at the bottom of the NHL.

Vancouver Canucks 2019-20 statistics when leading by one goal. Data via NaturalStatTrick.com

In other words, the Canucks gave up more shots and chances when leading by one goal than any other team in the NHL.

Only the Ottawa Senators allowed a higher rate of goals against when leading by one. It shouldn’t come as a surprise that the Senators spent the least amount of time leading by one goal this season: they gave up a lot of leads this season and it cost them in the standings, where they were better than only the dreadful Detroit Red Wings.

The Senators are not a team to which you want to be compared right now, particularly defensively. They gave up the second-most goals in the NHL this past season.

So, why didn’t the Canucks end up in the basement with the Senators or, at the very least, out of the playoffs like the Jets? One key is that they out-scored their issues, turning one-goal leads into two-goal leads. 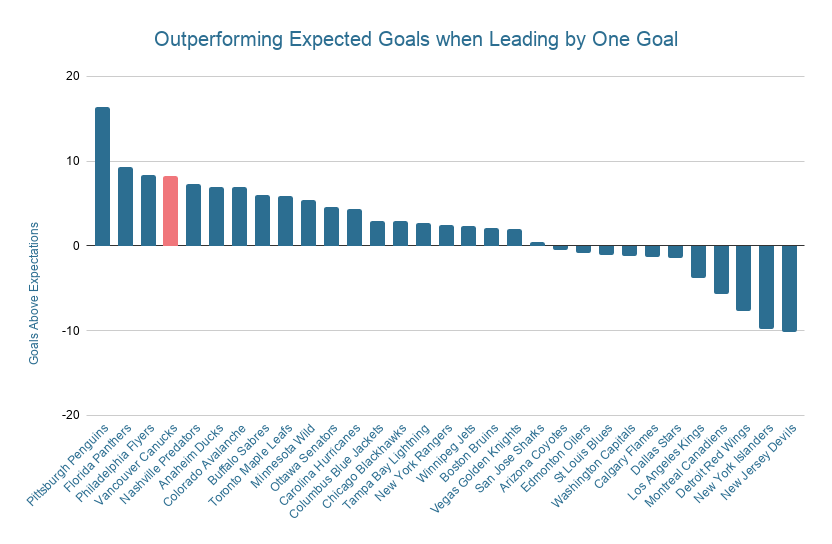 Outperforming Expected Goals when Leading by One Goal. Data from NaturalStatTrick.com

Bingo. The Canucks were fourth in the NHL in outperforming their expected goals when leading by one.

That can mean a couple of things. The Canucks do have some elite finishing talent on their roster — mainly Elias Pettersson — so that has an impact here. It could also mean that the Canucks were quite fortunate to have so many of their one-goal leads become two-goal leads and that their luck in this area might not last.

Finally, let’s take a look at why the Canucks give up so many shot attempts and scoring chances when up by one goal. We’re going to look just at personnel and not systems, though systems are worth a closer look in the future.

There were 19 Canucks skaters that played at least an hour while they were leading by one goal. Well, 19 skaters plus Tim Schaller, who is no longer a Canuck and was excluded here. Looking at how they performed by expected goals is pretty telling. 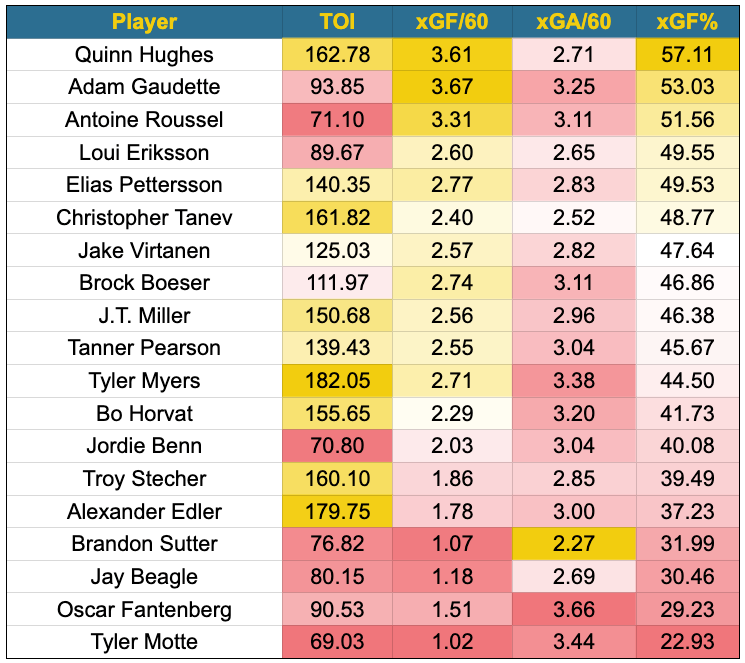 Vancouver Canucks players when up by one in the 2019-20 season. Data via NaturalStatTrick.com

The chart is sorted by expected goals percentage and coloured by how far above and below league average each player was in the given statistic. Gold means better, red means worse, basically.

The amount of red under expected goals against suggests that the Canucks might indeed have a systems issue when defending one-goal leads. The Canucks had just one player that performed better than average in terms of expected goals against — Brandon Sutter — though Chris Tanev was right around league average, as was Loui Eriksson and Jay Beagle. Sutter’s defensive play, however, is marred by the complete lack of offence and the same is true for Beagle.

The worst offenders defensively were Oscar Fantenberg, Tyler Motte, and Tyler Myers. When we look at time on ice combined with this, however, Fantenberg and Motte at least didn’t play as much as Myers, Alex Edler, or Troy Stecher, who also struggled when we combine xGA and xGF into xGF%.

Perhaps Hughes will get more opportunities to defend leads next season, because he looks like one of the Canucks’ lone hopes in that area.