Quinn Hughes is closing in on multiple Canucks records, has good vision too

In his very first season, Quinn Hughes could become the highest-scoring defenceman in Canucks history.
Feb 24, 2020 7:01 PM By: David Quadrelli 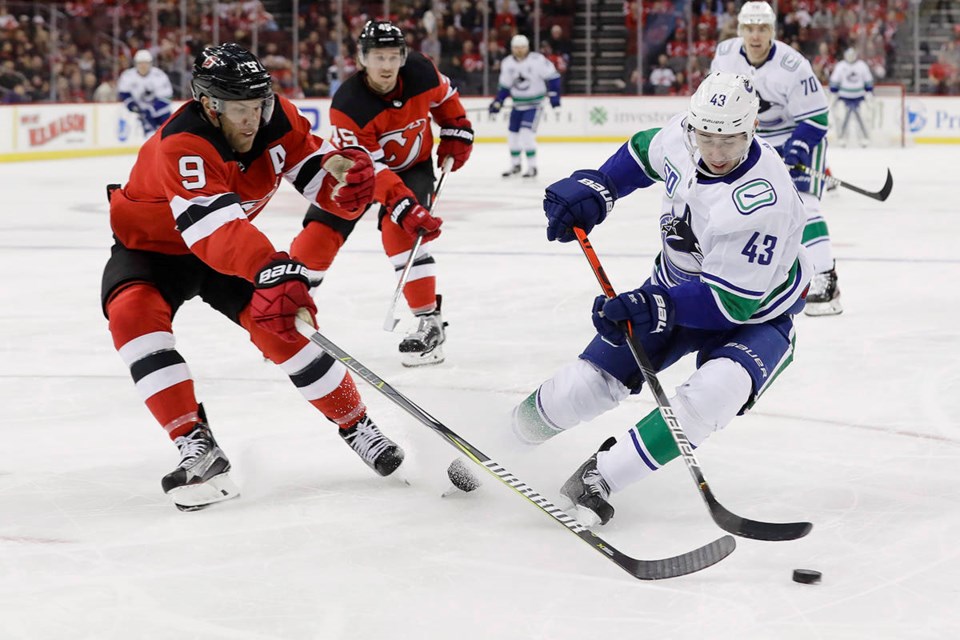 In the fourth edition of Quads’ Awesome Canuck of the Week, Quinn Hughes takes home this most prestigious of honours… again.

Quinn Hughes was the very first Quadsome Canuck of the Week, and his performances in the last week make it hard not to give him the honour once again. Here are four things the Canucks’ rookie blueliner did exceptionally well.

1 | He closed in on Canucks rookie records.

This is elite company, at least in Lidstrom’s case, and pretty good company in the case of Berard and Niinimaa. More than that, Hughes still has a ways to go before his season is over. The Canucks still have 21 games to play, and with how good Hughes has been playing, who knows how many points he can put up?

With 41 assists, Hughes is currently 10th all-time among rookie defencemen and just one assist behind the player that holds the franchise rookie defenceman record, Dale Tallon.

Tallon also holds the Canucks record for points by a rookie defenceman, tallying 56 points in the 1970-71 season.

The Canucks record for points by a defenceman is currently held by Doug Lidster, who reached 63 total points in 80 games.

Hughes currently sits at 49 points and leads all NHL rookies in points. He's currently on-pace for 66 points, enough to pass both Tallon for the rookie record and Lidster for the all-time Canucks record for points by a defenceman. In fact, he's on-pace to match Elias Pettersson's rookie season.

Pettersson tallied 66 points in what was a memorable Calder Trophy-winning season, breaking the Canucks’ record for points by a rookie.

If Hughes can come even close to that record, he has to take home the Calder, right? Right?

When having the discussion of the Calder Trophy debate between Cale Makar and Quinn Hughes, it’s important to examine how much each defenceman means to their team’s success.

Head coach Travis Green trusts Hughes to play in any situation, apart from the penalty kill, which has led to Hughes logging some big minutes, playing in many different scenarios.

Hughes logged 26:56 minutes of ice time in last Sunday’s loss to the Ducks, 27:05 against the Wild, and 17:56 in Saturday night’s win over the Boston Bruins. More importantly, Hughes controlled the majority of the play in all of these games.

Against the Ducks, Hughes had a corsi percentage of 77%, 61% against the Wild, and 67% against the Bruins. That means the Canucks drastically out-shot their oppositioin with Hughes on the ice at 5-on-5.

When you’re playing in all situations, controlling the play that much can only mean good things for your team. In short, good things happen when Hughes is on the ice.

We’ve talked about points already in this article, but it needs to be said that Hughes has five points in his last three games, his 49th point of the season coming off a beautiful pass to a wide open Tyler Toffoli on Saturday night — but more on that later.

Those 49 points not only lead all rookies, but also put Hughes 4th amongst all NHL defencemen.

The three defencemen mentioned all play huge roles for their teams, and while it’s almost certain these three will be the three top nominees for the Norris, I’m almost certain Hughes will receive some votes for the award given to the NHL’s top defenceman.

As a rookie, that’s just downright impressive and almost unheard of.

4 | Used his vision and skating ability to set up two beautiful goals.

The two assists Hughes picked up on Saturday night against Boston were simply beautiful. Let’s just get into it and talk about what makes these set ups so impressive.

First there’s this play, and although it didn’t result in a goal, it showcases how Hughes’ ability to turn on a dime and elude the opposition is almost unfair:

That’s a spin move at the line to lose the forward pressuring him, and a snipe pass that probably results in a goal nine out of ten times.

Then there were the ones that actually went in.

We can never get sick of watching Quinn Hughes play hockey. pic.twitter.com/gqTw3ragja

Similar to the first play, Hughes wheels the puck along the wall while protecting it from his opponent until he can manage to find a passing lane.
Hughes loses David Pastrnak, which forces defenceman Brandon Carlo to come below the goal line to pressure Hughes, leaving Adam Gaudette open in front.

Hughes threads the needle perfectly to find Gaudette, who makes no mistake potting a shot over the shoulder of goaltender Tuukka Rask.

And who could forget Hughes setting up the newcomer Tyler Toffoli for his second goal of the game and second goal as a Canuck?

late to the party here is his second... pic.twitter.com/qgtdh90o07

There’s a scramble in the Boston net, and Hughes comes away with the puck. Rask isn’t quite set up yet, which makes the Bruins players think Hughes is going to attempt a quick shot before the goaltender can get fully set.

Instead, Hughes shifts his weight to keep the Bruins guessing and waits patiently for Toffoli to get open in the slot. He then zips a pass to a wide open Toffoli who made no mistake burying his second goal of the night.

Hughes was the Canucks’ best player last week, and with 19 points in his last 17 games, it doesn’t appear as though Hughes will be slowing down anytime soon.