Quinn Hughes is better than Cale Makar, Rasmus Dahlin, Miro Heiskanen, and you

I have seen the future and it’s name is Quinn Hughes.

These days, it seems like the 20-year-old defenceman is all anyone in Vancouver wants to talk about. Just about everyone in the Vancouver media has written a “Quinn Hughes is really good” article, to the point where it can be difficult for latecomers to find a new angle on his impressive rookie season.

There is one aspect of Hughes’ season that’s gone underreported, though, especially outside the city of Vancouver. And that’s how much better Quinn Hughes is than you, specifically.

Hockey is a competitive sport, and while being good at it is fine and dandy, it means nothing if you aren’t also better than someone else. After all, how can you know if someone is any good unless there’s someone else to use as a measuring stick? It’s great that people are starting to realize how good Quinn Hughes is, but it’s not good enough. They also need to know that he’s better than most if not all of the defenders in his age range.

Oh, and just to reiterate, he’s better than you, too. Whatever it is you’re good at, he’s probably better at it. That’s how good he is.

Luckily, making that case should be easy, because despite the fact that Hughes is less than a year into his NHL career, he’s already outperforming some of the league’s best young defenders in some important statistical categories.

Quinn Hughes compares favourably to the best young defencemen in the NHL.

Recently, a couple of writers at the Athletic have been getting Colorado Avalanche and Buffalo Sabres fans riled up by suggesting that Quinn Hughes may have the edge over Ramus Dahlin and Cale Makar, and it’s high time Pass It To Bulis got in on the action. I’m also going to throw Miro Heiskanen into the mix just to upset Dallas Stars fans because I’ve never forgiven them for what Tyler Seguin and Jamie Benn said about the Sedin twins a few years ago.

So, let’s take a look at how Quinn Hughes stacks up against each of these players, and more importantly, against you, the reader, who has done little with the precious opportunities that have been afforded to you.

Cale Makar is still considered the front runner for the Calder Trophy, thanks in large part to his impressive offensive totals as a 21-year old rookie for the Avalanche. Quinn Hughes has actually surpassed Makar in the rookie scoring race now, which is bad for Avs fans, because Makar’s superior offence has basically been their only leg to standing when it comes to arguing who should be crowned rookie of the year.

Folks in Colorado will quickly point to the fact that Makar has played less games than Hughes, and thus has a higher points-per-game total, but I would advise them against opening up the debate to include anything beyond boxcar stats, because Hughes is outperforming Makar in just about every statistical category aside from individual goal total. 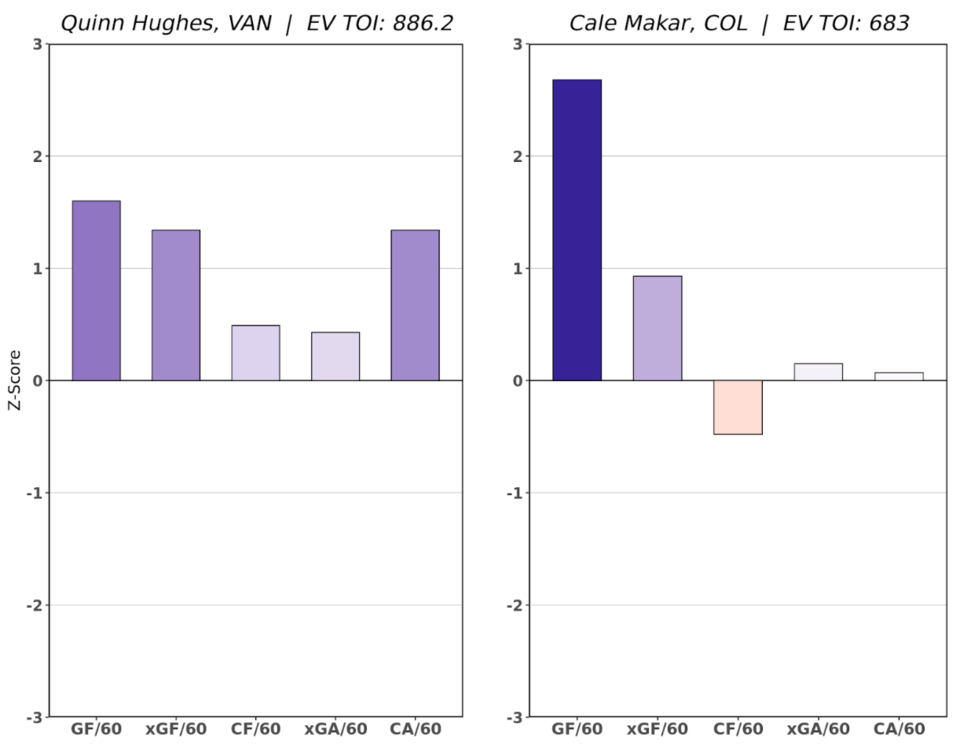 Quinn Hughes may lose out on the Calder, but if he continues to play at the level we’ve seen from him this year, he’ll have plenty of chances to fill out his trophy case. That stands in stark contrast to your trophy case, of course, which is filled only with regrets.

Heading into the 2018 NHL Entry Draft, Rasmus Dahlin was considered the undisputed choice to go first overall, but it’s the man who fell to seventh who’s been the better defenceman thus far. I won’t spend too much time on Rasmus Dahlin, since Harman Dayal already did an excellent job of comparing the two players in a recent piece for the Athletic, but suffice it to say, he’s struggled a bit at even-strength since landing with the Sabres last season.

Dahlin has been outperformed by Quinn Hughes in every conceivable statistical category, including goals, assists, expected goal share, expected shot share, and number of brothers in the NHL. It’s still early, but Quinn Hughes very clearly has the edge on Dahlin, even when it comes to statistics that aren’t tracked by any reputable database and that I just made up right now. 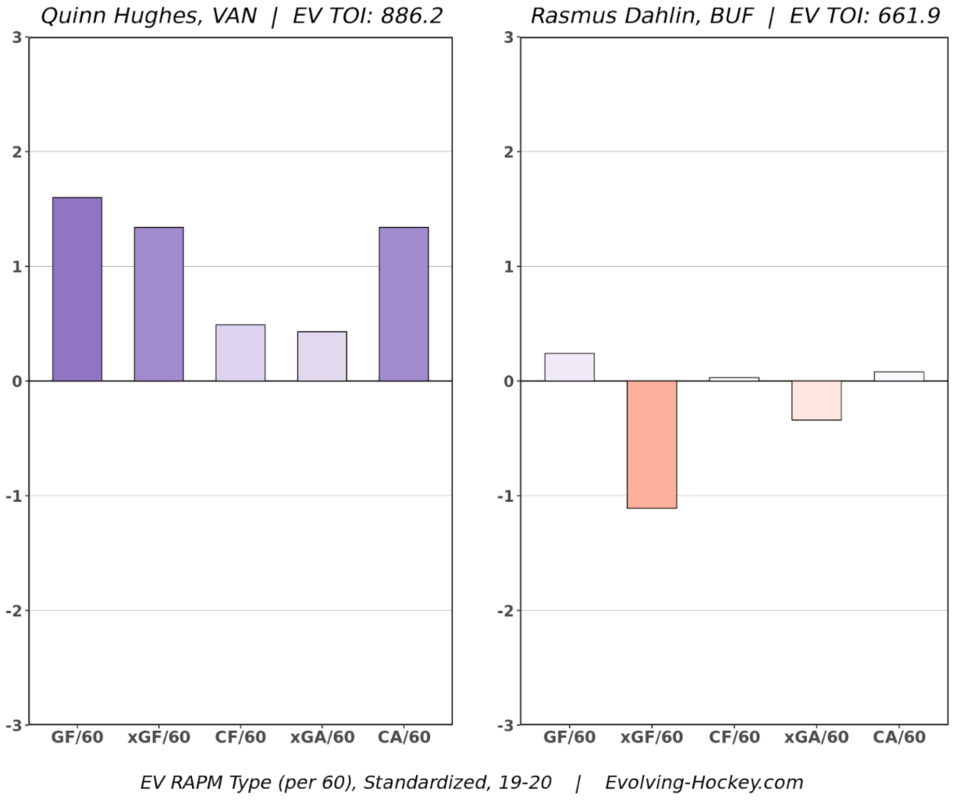 While Dahlin hasn’t quite been able to put things together at even strength, he has provided significant value on the power play, where he trails Makar by just a single point, and Hughes by four points. Still, no matter which way you slice it, Hughes has been the superior player by just about every metric at this point in their careers.

Dahlin may not live up to the unfair “generational” label he was given at the time of the draft, but he’s still very young and should develop into a defenceman with high-end skill for the Sabres. Unfortunately, the only “generational” label that has stuck to you is when your nephew calls you a “boomer” and ignores you when you say, “Well actually, ‘boomer’ only applies to those born between 1946 and 1964.”

Unlike Makar and Dahlin, Miro Heiskanen has actually mounted a fairly compelling case thus far that he has a stronger defensive impact than Quinn Hughes. He holds a weaker on-ice goal differential and has lost the shot-share battle to Hughes so far this season, but is outpacing Hughes in terms of expected goal share, which would indicate that he has done a very good job at limiting the quality of shots the Stars face when he is on the ice.

The assertion that Heiskanen is a superior defensive player to Hughes would also appear to bear out when you look at rate stats, as Heiskanen has allowed a lower rate of expected goals against than any of the other players mentioned. 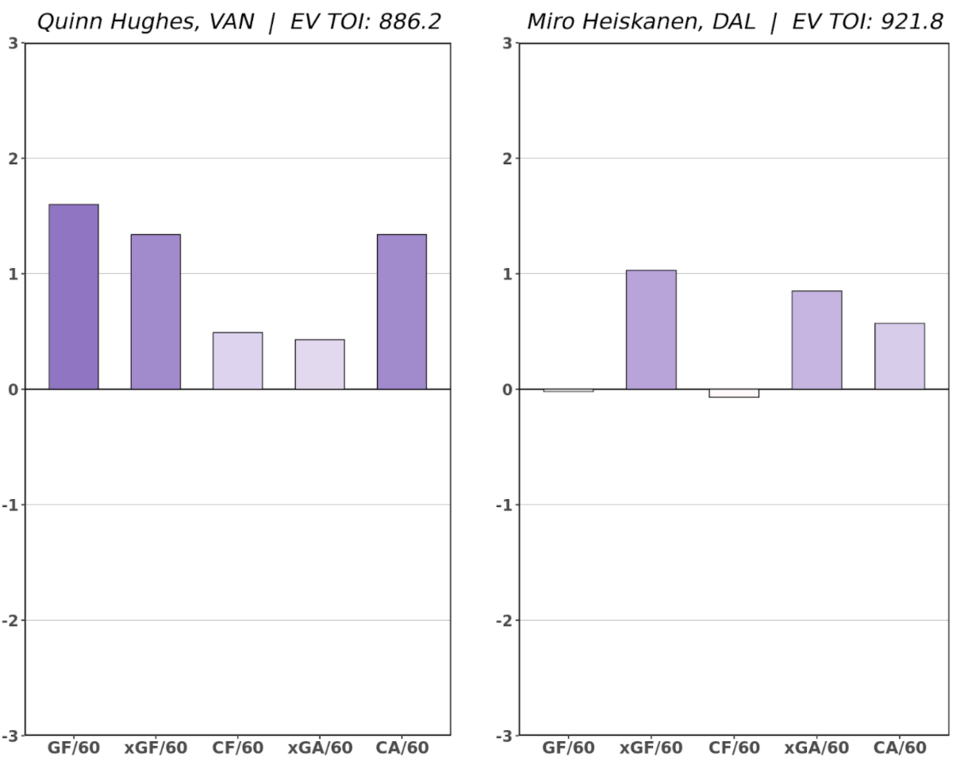 The difference in this case is that, while Heiskanen’s two-way game is extremely impressive and nearly unmatched when it comes to his age group, his offensive game hasn’t developed at the same rate. Hughes is outpacing him offensively both in terms of boxcar stats and underlying numbers, and, since he’s already proven to be quite impressive defensively in his own right, it’s easy to make the case that he’s the more valuable player overall.

What makes these underlying numbers doubly impressive is the fact that both players are just 20 years old. What were you doing at 20 years old? You were probably at community college getting your first liberal arts degree only for you to find yourself tens of thousands of dollars in debt, all in service of becoming the world’s best-educated Sandwich Artist.

At least in this case, it’s not really your fault. Going into debt for a postsecondary education is a sham designed to perpetuate inequality. It’s profoundly unfair, just like the fact that neither of these players are getting the recognition they deserve.

Now that you’ve just spent the last few minutes examining how Quinn Hughes is already one of the best defenders in the league, it might be a good idea to reflect on what you’ve been doing with your life.

You’re probably at work right now, pretending to look at quarterly reports when really you’re just wasting time scrolling through social media for whatever piques your curiosity, watching the hours click by and hoping that no one notices that you don’t actually do any real work around here.

Or maybe you’re at home, reading this article to avoid interacting with your family. You may be drawn together by a familial bond, but you’ve realized you don’t feel any particular affection towards them. You can sense that your children view you as little more than a passenger in their lives, and your partner became a stranger to you after the arrival of your first born. 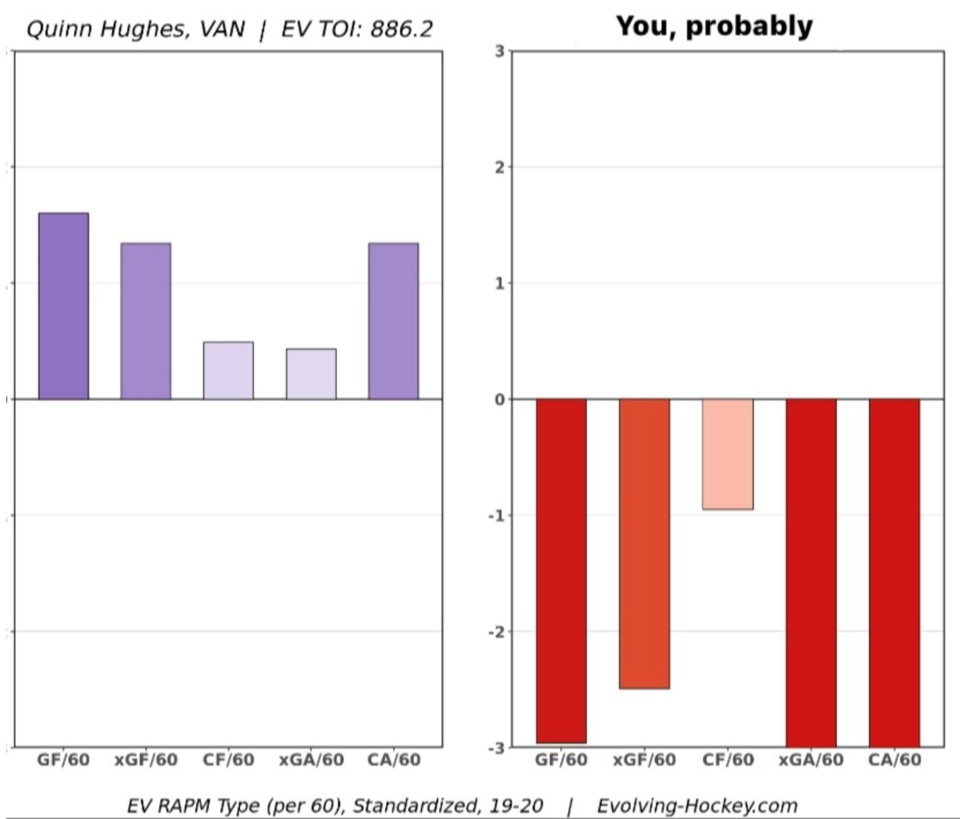 Quinn Hughes vs You. This RAPM Chart is not Evolving-Hockey's fault.

Charles Dickens’ David Copperfield begins with one of the great opening lines of any novel in the English language: “Whether I shall turn out to be the hero of my own life, or whether that station will be held by anybody else, these pages must show.”

These pages have shown that, you are not, in fact, the hero of your own life. That station is held by Quinn Hughes. He is the best young defender in the game and a constant reminder of your numerous failures and disappointments.

But, considering just how good Hughes is, maybe it’s not all that bad to be worse than him. If even the best young defencemen in the NHL pale in comparison to Hughes, maybe there’s hope for you yet. If you work hard, reestablish the bonds of love with your family and community, and finally embrace those dreams you’ve been running from all these years, maybe someday you can be a really solid second best.