The Quadsome Canucks Player of the Week: Quinn Hughes

Four reasons why Quinn Hughes was the best player on the Canucks this past week.
0
Feb 3, 2020 9:34 AM By: David Quadrelli 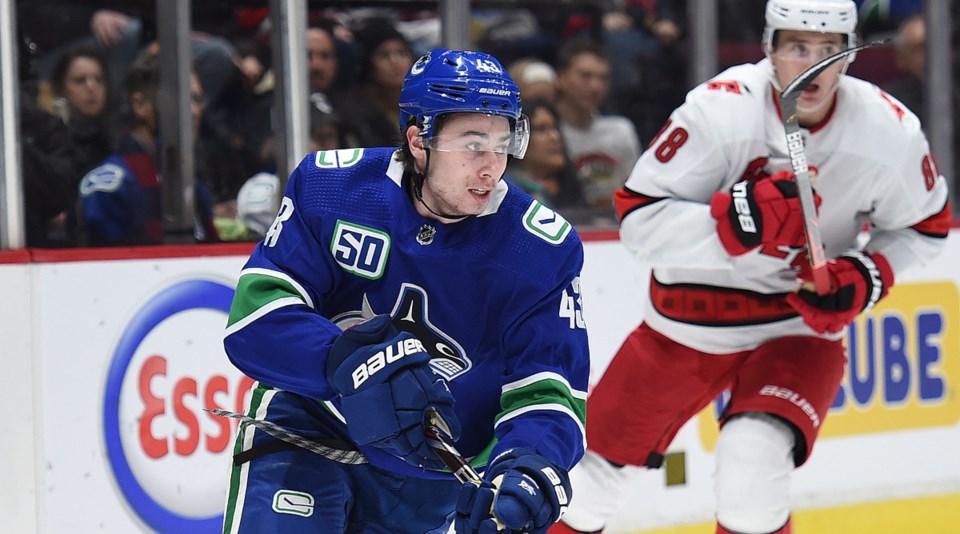 You may be wondering what it is that you’re about to read. The title may have given you a hint, but allow me to explain.

If you’ve read any of my previous work, you know I love to write deep dive editorials on players, (mostly Quinn Hughes) and love to make lists using player’s jersey numbers. Fun fact, I was encouraged to write 51 reasons the Canucks shouldn’t trade Troy Stecher by PITB overlord, Daniel Wagner.

I followed that up with 77 Reasons Nikolay Goldobin deserves another shot, 43 Reasons Quinn Hughes should be at the All-Star Game, and most recently, 21 little things Loui Eriksson has done well.

Another important note, my nickname, given to me originally by Wyatt Arndt, is Quads.

1 | He bounced back after his worst performance.

The smooth-skating rookie blueliner has been incredible all season long, but faced some criticism after his first game back from the All-Star Game, and rightfully so.

Hughes has fans accustomed to seeing him rarely make mistakes with or without the puck. He’d been near perfect in both ends of the ice through the first 50 games of this season. However, in the Canucks win over the St. Louis Blues, Hughes made a few mistakes with the puck under pressure, one of which cost his team a goal.

Much like a rookie Chris Tanev, Hughes seems to be unfazed by even the highest of high-pressure situations, which is why it was unusual for fans to see him make multiple mistakes in a game.

Elias Pettersson had one of the most memorable rookie seasons in recent memory last season, but saw his production take a sharp decline in the second half. With that fresh in the minds of fans, it would have been easy to have the thought creep in your mind, “Is Hughes going to slow down too?”

Then Hughes went out the next two games and had what can certainly be considered two of his best games of the season. He scored a goal and an assist in the Canucks’ win over San Jose, and scored two goals, including the overtime winner, in the Canucks’ win Saturday afternoon against the New York Islanders.

You know when it’s good to have players who have the ability to bounce back quickly from a poor performance? During the Stanley Cup Playoffs.

The Canucks did everything they could to bend but not break late against the Islanders on Saturday. They played well defensively, but didn’t generate much in the form of scoring chances on Islanders goaltender Thomas Greiss.

Enter Quinn Hughes, who broke a 1-1 tie in the second period and later won the game for his team in overtime with this beautiful individual effort:

3 | Spread the offence around.

Not only did Hughes score 3 goals this past week, he also added two very timely assists, that directly resulted in his team scoring important goals.

The first one came against San Jose while the Canucks were down by a goal early in the third. After a faceoff win came back to Hughes at the point, the rookie dman threw a crisp, clean pass over to Tyler Myers, who pulled off a nifty little give-and-go with J.T. Miller to tie the game for the Canucks once again.

Then, against Carolina, Hughes made a perfect pass to partner Chris Tanev in order to set up the Canucks’ first goal of the game.

In order to qualify for the Quadsome player of the week, a player needs to be relatively humble, which is perfect, because there aren’t many egotistical players currently employed by the Vancouver Canucks.

After the win over the Islanders, Hughes was asked how it sounds to be the rookie scoring leader. “It sounds like that could change pretty soon,” said Hughes. “I’m not going to say it doesn’t mean much, but you know, we’ve still got 30 games left.”

So there you have it folks! Quinn Hughes is the first Quadsome player of the week! Who will it be next week? Check back next Monday morning to find out!

IWTG: Quinn Hughes maroons the Islanders in overtime, Canucks extend winning streak
Feb 1, 2020 5:12 PM
Comments
We welcome your feedback and encourage you to share your thoughts on this story. We ask that you be respectful of others and their points of view, refrain from personal attacks and stay on topic. To learn about our commenting policies and how we moderate, please read our Community Guidelines.