Quinn Hughes passes the eye test, but does he pass the ear test?

Is the media talking enough about Quinn Hughes relative to his impressive rookie season?
Will Fox Jan 31, 2020 11:30 AM

Quinn Hughes has been getting a lot of attention this season and for good reason. His possession game is incredible. His highlight reel moves made the Great One’s voice crack. His nickname is very cute.

But is he passing the Ear Test?

Unless you’ve been living under a rock the last 10 years, you’ve heard some form of the debate between advanced stats and the “eye test” – the timeless battle between computer boys and old hockey men. But what if you’ve never played the game and you’re bad at math?

This is where The Ear Test comes in. If the eye test asks “does this player look good,” and the stats test is “do the data describe this player as good,” then the ear test asks “are people talking about this player?”

It’s a talent evaluation model for the 99% - those who can’t play hockey at a high level, can’t do math at a high level, but would like to discuss hockey players regardless. That’s me, at least.

So let’s get into it:

To set the groundwork for this study, I conducted a news database search of articles referencing the top producing skaters from 2009-2020. Here’s the top 25 ranked by articles/game played: 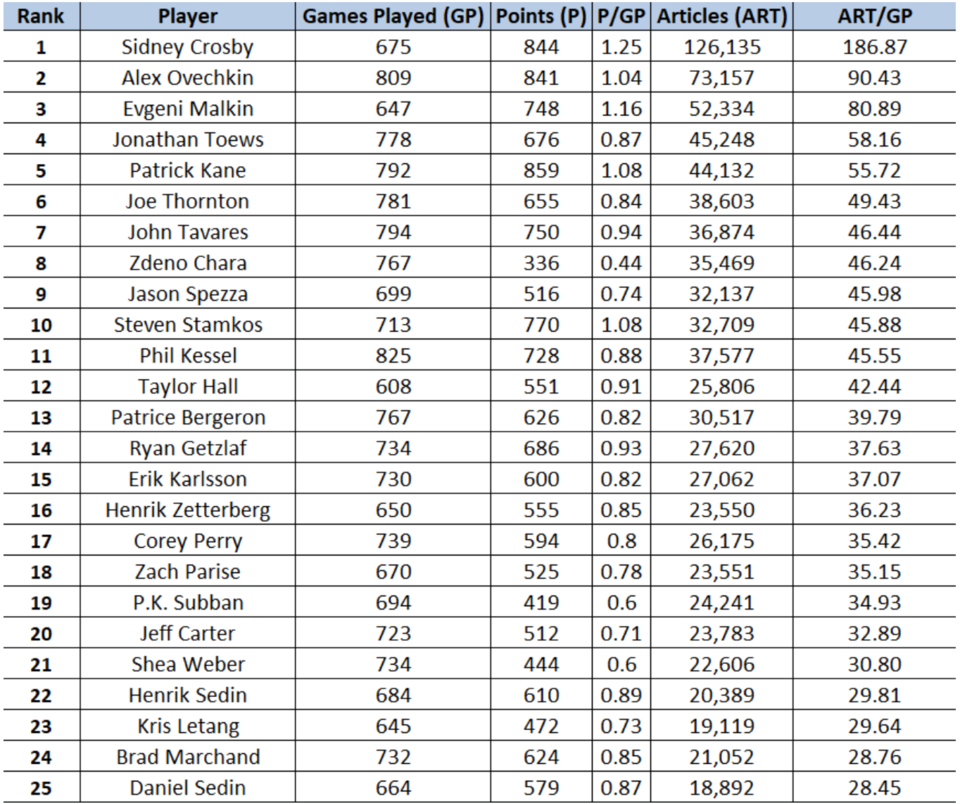 No surprise, Crosby was the most talked-about player of this period, with 126,135 articles appearing in the dataset. Malkin was the third-most discussed player, which is surprising given he is not one of the 100 greatest players of all time. Henrik Sedin comes in 22nd, which is cool because that’s Daniel’s number, and Daniel comes in 25th, which is a number of no particular significance.

I can confirm that I’ve heard of all these players, and I can confirm that they are all good. With this ground work established, we can see that articles per game played (ART/GP) has a strong correlation with individual and team success (with some exceptions like Jason Spezza.) So what does this mean for Quinn Hughes?
Rookies, the Calder, and Media Coverage

With Quinn Hughes as our focus, I wanted to isolate the relationship between media coverage and media voting in the Calder. For this, I looked at number of articles between September 1st and April 1st in the rookie season of players who finished top 5 in Calder votes.

A weak trend emerges, illustrated when looking at rookie forwards across 10 years here: 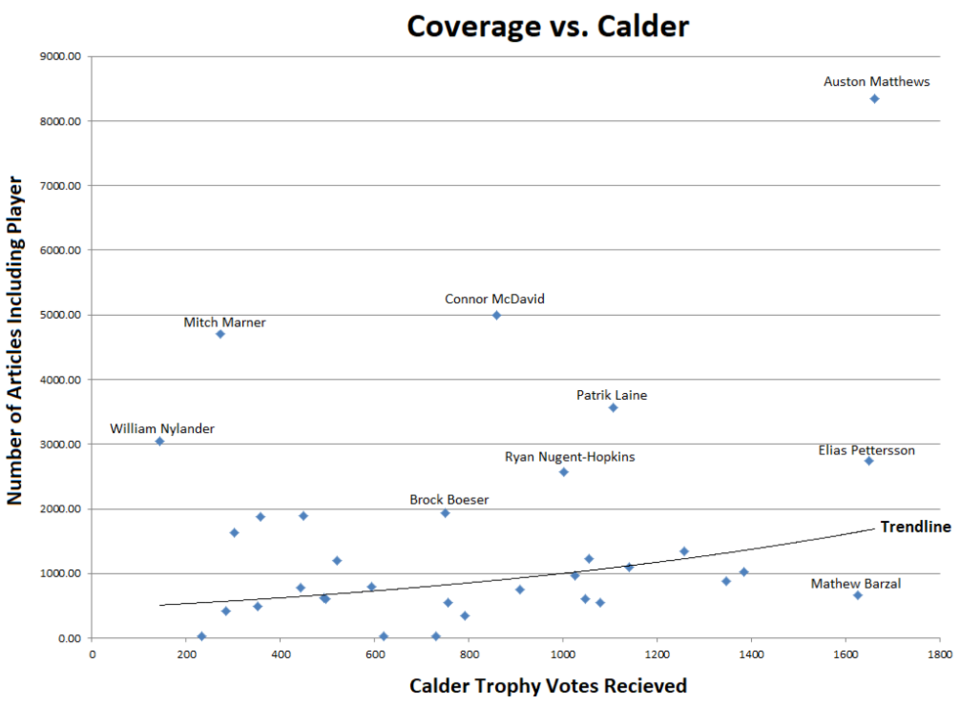 There’s a soft correlation between voting and articles written about players, but the above graph also illustrates the out-of-this-world attention that rookies receive in Canadian markets.

This complicates things, since Quinn Hughes happens to play in one of those maniac markets. It’s also where things continue to be boring get interesting.

Remarkably, Hughes has actually managed to fly under the radar so far this season. Only 904 articles appeared for him so far this season compared to 2,031 for Pettersson and 1,255 for Boeser in the same time frame for their respective rookie campaigns. This seems insane to me, Given that Hughes is on pace for one of the best campaigns we’ve seen out of a defenseman since the fall of the Soviet Union.

Articles about Quinn Hughes in comparison to other Canucks rookies and Cale Makar.

However, he’s leading Makar in coverage, and the question down the stretch will be if this is enough to tighten the Calder race. Colorado tends to get a lot of coverage too, but I think this could end up closer than the midseason results suggested. He has the lead for now, and there’s a lot left to be written. Helping the Canucks secure their first playoff berth in five years, for example, would be a big win for the Hughes camp.

This actually matters, as the Calder Trophy is voted on by the Professional Hockey Writers Association; if they’re not talking about a player, they’re probably not going to vote for that player.

Look, I know that Gretzky said Hughes had better hands than he did. I know his insane impact on the possession game. I know the tingly feeling you get every time he touches the puck. But thus far, he’s significantly trailing Boeser and Pettersson’s rookie campaigns in sheer volume of coverage.

Why is that? I’ve got three possible answers:

Boeser arrived as a pure RW goalscorer, something Canucks fans have dreamt about for decades, even during the peak of the Sedin core.
Pettersson’s seamless transition to the number one centre position guaranteed stardom, as elite centres are generally the most popular players in the league.

Hughes is a defenceman. Regardless of his real impact, ask yourself how often you look up zone entry or breakout pass compilations on YouTube.

Boeser’s explosive entry into the NHL was the most exciting one by a Canuck since Bure. It also came near the end of one of the darkest periods in Canucks history. Prince Charming promised there was indeed light somewhere at the end of that tunnel.

Excitement around Pettersson was real before he entered the league, but no one expected him to immediately fill the void left by the Sedins. We love our quirky Swedes.

With Hughes, Vancouver fans might be getting a little spoiled. Year after year another rookie joins the team and lights up the league. It’s getting rather boring, isn’t it?

Boeser has that beautiful hair, that cool name, and that small town charm to him. Fans were immediately smitten with his personal story alongside his mythological good looks.

Pettersson was rough around the edges. He’s got some snark, some cockiness, and he’s got a lot to prove. The death stare was an instant hit, as were his reactions to his own goals.

Pettersson has a unique ability to channel our own reactions to the things he does.

Meanwhile, as the eldest brother of hockey’s next holy trinity, Hughes is already very polished. He’s a consummate professional. Some have (unfairly) described him as one of the dullest interviews in the NHL.

At times, he almost reminds me of Zach Braff in Garden State – staring calmly ahead while the whole world panics around him. It kind of reflects his play-style, too.

This is not a criticism, and Huggy Bear is still beloved, make no mistake. But he’s probably less of a media darling than Boeser and less of a firecracker than Pettersson.

So does Hughes pass the Ear Test?

It seems crazy, but at this point Hughes might be flying under the radar relative to his success.

His impact on the Canucks has been absolutely incredible this year. He might even make history. But in terms of hype, he’s still getting less coverage than we saw of Boeser, Laine, Nylander, Marner, or even Brady Tkachuk during their rookie campaigns.

So don’t hesitate. There’s still plenty more room on the hype train. And no, there are no brakes.