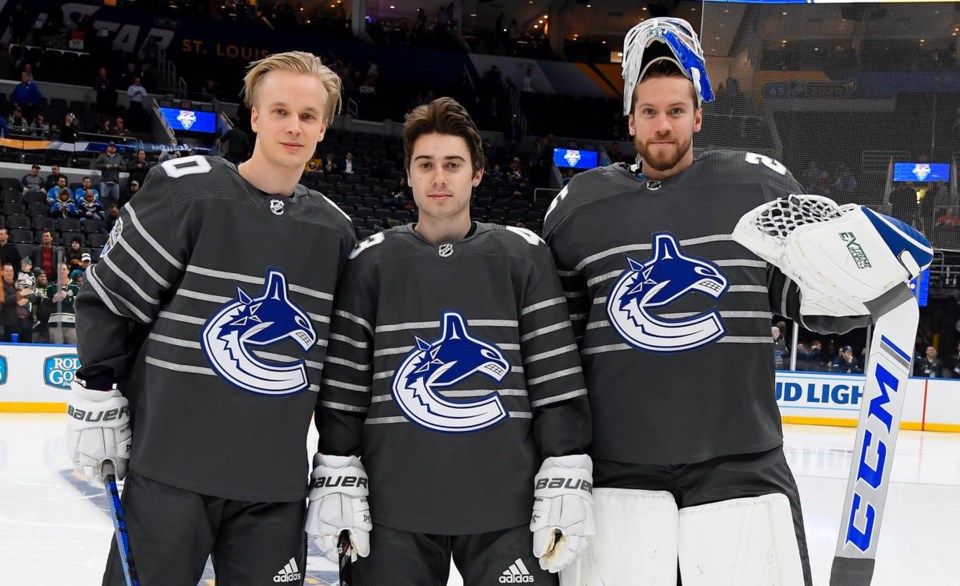 Two of the three Canucks at the 2020 NHL All-Star Game have been favourably compared to Wayne Gretzky, in both cases by The Great One himself.

The third Canuck is a goaltender, so we’ll forgive Gretzky for not drawing a parallel in his case.

During Elias Pettersson’s rookie season, Gretzky was effusive in his praise for the young phenom. With numerous people point out that a slap shot goal Pettersson scored off the rush was a carbon copy of one Gretzky scored during the 1988 playoffs, Gretzky instead pointed to other elements of his game.

“From my point of view, he’s got a lot of my similarities,” said Gretzky on Sportsnet 650. “His hockey sense and his playmaking ability is as good as anybody right now, and that’s probably where the comparisons come from — much more the playmaking than anything else.”

On Saturday at the NHL All-Star Game, it was the latest Canucks rookie superstar, Quinn Hughes, that earned plaudits from the three-time All-Star Game MVP.

Gretzky was the honourary captain of the Pacific Division, so was on the bench for both of their games during the 3-on-3 tournament. The first game for the Pacific, against their Western Conference rivals, the Central Division, was a typically high-scoring affair. The two teams combined for 15 goals, with the Pacific running away with it, 10-5.

One of those ten goals was a beauty from Hughes, one of the best goals of the night. Matthew Tkachuk cut off the puck along the boards and fed Hughes, who went in alone on St. Louis Blues goaltender Jordan Binnington. Hughes bamboozled Binnington, swooping the puck to his backhand and tucking it just inside the post with one hand on his stick in Forsbergian fashion.

He made it look effortless.

That fine display of danglery had Gretzky buzzing on the bench.

“Wow. That young lad’s a defenceman?” he asked in disbelief. “That’s better hands than I had. Wow. That’s pretty good.”

That young lad set up Pettersson alone in front shortly after and the Swedish centre went for the same move, but Binnington, wise to the tricks of the young Canucks, made the stop with his left toe.

Hughes finished the first game with four points — a goal and three assists — while Pettersson has just one assist despite a team-high six shots on goal. Their line was one of the best for the Pacific, casually controlling the play when they stepped on the ice.

Their third linemate? Well, that’s a bit of a bone of contention.

One of the fun aspects of the NHL All-Star Game is that it gives us line combinations that could never occur in a real NHL game, like Gretzky lining up alongside Mario Lemieux and setting him up for a goal. In this case, however, it gave us a line combination that could have occurred, if not for the Canucks going a different direction at the 2016 NHL Entry Draft.

Pettersson and Hughes played with Matthew Tkachuk, who was selected sixth overall by the Calgary Flames in 2016, one pick after the Canucks selected defenceman Olli Juolevi. Tkachuk has since scored 212 points in 273 games and leads the Flames in scoring this season; Juolevi, sidetracked by injuries, has yet to play an NHL game.

The line combination had some Canucks fans wistful for what could have been. Hindsight is 20/20, of course. No one could have foreseen the injury trouble Juolevi has faced and perhaps in another reality where the Canucks picked Tkachuk, they wouldn’t have been in a position the following years to draft Pettersson and Hughes.

Pettersson and Tkachuk, in particular, seemed to be on the same page when it comes to what the NHL All-Star Game is all about: entertaining the kids. Both attempted fun trick shot goals, rather than just typical hockey plays. They may not have worked out, but you could tell the effort was there.

Tkachuk got fancy on a breakaway, flipping the puck into the air and trying to bat it into the net with a baseball swing. Pettersson attempted a Zorro Goal, a lacrosse move from behind the net that Andrei Svechnikov and Nils Hoglander have pulled off this season in the NHL and SHL, respectively. Unfortunately, the puck rolled off his stick, just as it did when Pettersson tried a spinning lacrosse-style shot on a breakaway.

Those failed attempts at something spectacular could have meant a disappointing All-Star Game for that line, but they put up plenty of more traditional points along the way. In the final against the Atlantic Division, Pettersson, Hughes, and Tkachuk combined for two more goals, leading the Pacific to a 5-4 win and the $1 million prize split among the players.

After not scoring on any of his six shots in the first game, Pettersson was a precision sniper in the final, scoring goals on both of his two shots.

On the first, Hughes poked the puck off the stick of Matthew’s brother, Brady Tkachuk, and Matthew sprung Pettersson on a breakaway. His ridiculous release was by Tampa Bay Lightning’s Andrei Vasilevskiy before the goaltender even dropped down into his butterfly.

Pettersson’s second goal was a crucial one for the Pacific, tying the game 4-4 with five minutes remaining. Pettersson took a cross-ice feed from Hughes and beat Vasilevskiy cleanly under the blocker from the left faceoff circle.

One enthusiastic young Pettersson fan in the St. Louis crowd nearly lost his mind when his hero scored for a second time.

As for the third Canuck at the All-Star Game, he had a tougher time, as goaltenders always do. Jacob Markstrom was game for anything and made some fantastic saves, but was simply overwhelmed as the defence-optional play in front of him meant he had little chance on any of the goals that got past him.

Markstrom had an early highlight when he stared down Nathan MacKinnon on a breakaway and flashed out his left pad to kick aside the shot.

While he had a few other nice saves, Markstrom’s save percentage tells the tale: .500. He managed to stop half of the shots he faced, which isn’t all that unusual for the All-Star Game. Goaltenders are frequently left floundering in the pond hockey casualness of the game.

One of the big stories of the All-Star Game had nothing to do with the game itself: Green Day was the between-game entertainment and they kept their punk rock bonafides with several f-bombs that the television censors were unable to catch in time.

GET YOUR FUCKING HANDS UP IN THE AIR! #GreenDay #NHLAllStarGame pic.twitter.com/ruxItVCG1X

The All-Star Game is ostensibly for kids, but let’s admit it: a kid at a hockey game is guaranteed to hear more than a little cussing. In any case, if you hire Green Day to play an event, you should know what you’re getting yourself into.

It was reminiscent of when Snoop Dogg, a notable hockey fan, was hired to DJ the 2017 NHL All-Star Skills Competition and immediately dropped the needle on the uncensored version of Dr. Dre’s “The Next Episode” featuring himself. When you hire Snoop Dogg, you shouldn't be surprised to hear some salty language.

The hockey world took Billie Joe Armstrong’s f-bombs with aplomb, taking the opportunity to have a little fun, with none other than the legendary Dave Hodge embracing the chance to agree that the NHL All-Star Game can indeed be pretty insane.

Guess it's okay to say the NHL All-Star Game is fuckin' crazy.

All around, it was one of the best All-Star Games in recent memory.

Quinn Hughes has gotta go fast, Elias Pettersson to shoot hard at 2020 NHL All-Star Skills Competition
Jan 23, 2020 6:34 PM
Comments
We welcome your feedback and encourage you to share your thoughts. We ask that you be respectful of others and their points of view, refrain from personal attacks and stay on topic. To learn about our commenting policies and how we moderate, please read our Community Guidelines.