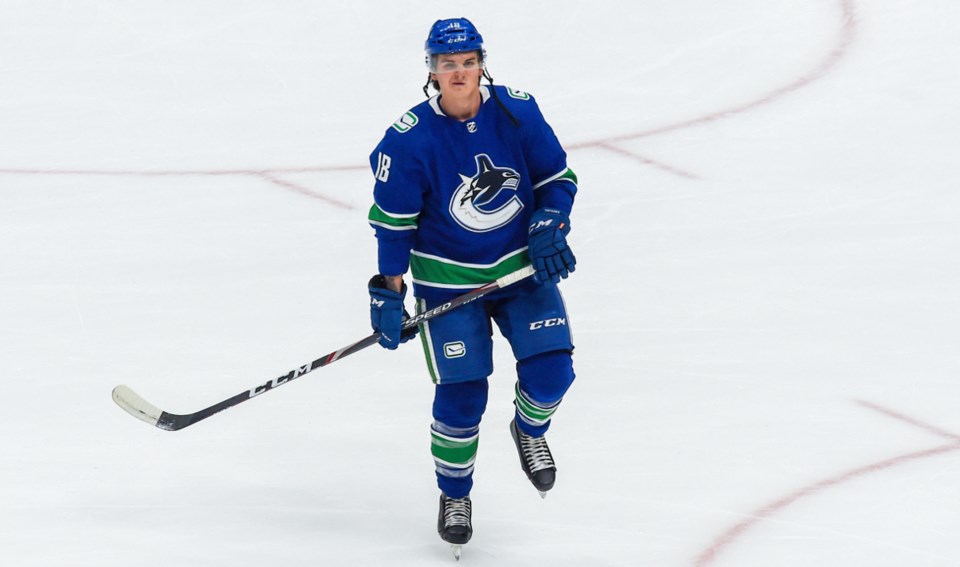 Jake Virtanen is expected to be back in the lineup for the Vancouver Canucks after coming off the NHL's COVID-19 protocol list.Bob Kronbauer / Vancouver Is Awesome

Heading into Tuesday night’s game against the Toronto Maple Leafs, the Vancouver Canucks lineup is starting to look a little less half-baked.

While some players were still absent from Tuesday’s morning skate — notably Tyler Motte and injured players Elias Pettersson and Jay Beagle — everyone else was back on the ice skating.

That includes Nate Schmidt, Jake Virtanen, Olli Juolevi, and Thatcher Demko, all of whom missed Sunday’s first game back from the team’s COVID-19 outbreak. Schmidt and Virtanen were the last two players to test positive on the team, so were the last two to be cleared from self-isolation, while Demko and Juolevi both needed more time to recover.

All four of those players could be in the lineup on Tuesday night, though it appears that Braden Holtby will get his second straight start after his stunning 37-save performance on Sunday, leaving Demko as the likely backup for the veteran netminder.

Line rushes in the morning saw Schmidt paired with Tyler Myers, taking the place of the suspended Alex Edler, while Juolevi moved onto the third pairing in place of Guillaume Brisebois, who struggled on Sunday in his first NHL game in over two years.

There were two new additions at forward during the morning skate. Virtanen skated on the third line with centre Travis Boyd and the recently-acquired Matthew Highmore, who is likely to make his debut Tuesday night.

The humour of a player named Highmore making his debut on April 20, a day traditionally associated with weed, has not been lost on the denizens of the internet.

The Canucks’ bottom-six forwards had some major issues combatting the Leafs’ depth forwards on Sunday, so getting Virtanen and Highmore in the lineup should help. Both have plenty of speed and Boyd isn’t a slowpoke either, so that could be an interesting line to watch if they can get their feet moving and get in on the forecheck against some of the slower, albeit more talented, forwards in the Leafs’ bottom six.

While the lines in the morning skate are what fans are likely to see hit the ice against the Leafs, Green refused to confirm anything.

“I can tell you that we’ll have 13 forwards, seven D, and two goalies in warm-up,” said Green.

That’s two extra players, which might indicate that they’re still unsure how a couple of their returning players will respond after the morning skate. It’s an understandable precaution in case a player coming off a bout with COVID-19 isn’t quite 100% healthy.

"We're all in this grind together."

There’s a balance to be struck between wanting to play hard for your teammates and taking care of your long-term health. It’s a difficult balance, particularly in hockey, which so often has a “play through pain” culture, something typically perceived as admirable but also lies behind issues such as the league’s hidden problem with painkillers.

After Sunday’s game, team captain Bo Horvat talked about being proud of the way the team “manned up,” while Holtby said the same of how they need to approach the rest of the season.

“We're all in this grind together,” said Holtby. “I think we'll see who's gonna man up and push forward and I think tonight was a good indication that it's going to be a lot of us.”

On Tuesday, Jimmy Vesey acknowledged the need for balance but pointed to it as something that can bring the team together.

“It’s definitely a rallying point, so to speak. Whatever the odds are that are stacked against us, we’re all in it together,” said Vesey. “You’re definitely sympathizing for the guys that are affected but, at the same time, no one around the league is really gonna feel bad for us. When the puck’s dropped, a lot of teams have a lot to play for.”

"When the puck drops we're playing to win."

At this point, so do the Canucks. Despite a three-week gap between games, the Canucks’ playoff odds have bizarrely improved.

That’s thanks to a dreadful run from the Montreal Canadiens, losing 6 of their last 8 games. While the Canadiens are still 10 points up, the Canucks are in the unfamiliar position this season of having games in hand.

In fact, the Canucks have five games in hand. If they win all five, they would be tied with the Canadiens for the fourth and final playoff spot in the North Division with the same number of games played.

Obviously, the chances of the Canucks actually going on a miracle run to make the playoffs are very slim, particularly with their difficult schedule, but it’s enough of a chance for the players to rally around.

“We're competitors and when the puck drops we're playing to win,” said Vesey. “The odds might be stacked against us, but we’ve got to put our head down — this is the situation we’ve been dealt, so we’re going to make the most of it.”