The Canucks have an under-the-radar option for a top-six winger: Adam Gaudette

The Canucks' missing top-six winger might be their third-line centre.

There were three key unrestricted free agents for the Canucks heading into the offseason: Jacob Markstrom, Chris Tanev, and Tyler Toffoli. None of the them re-signed with the Canucks, but general manager Jim Benning found a way to replace two of the three, signing Braden Holtby to take Markstrom’s place in net and trading for Nate Schmidt to fill the hole left by Tanev on defence.

At forward, however, Benning was content to stand pat, re-signing the Canucks’ restricted free agents but adding only Jayce Hawryluk, a savvy signing but more of a replacement for the likewise departing Josh Leivo. Benning doesn’t seem concerned about replacing Toffoli.

“In the regular season, let’s not forget, Tyler played 10 games for us,” said Benning earlier this month. “So we’re going to come back with pretty much the same forward group that we had last year and with our young guys, we think they’ll continue to grow and get better. As they do that, it makes our team better.”

That still leaves open the question of who will fill the vacant spot in the Canucks’ top six. The Canucks could turn to Jake Virtanen, but he can be frustratingly inconsistent. Hawryluk has untapped upside, but has mainly played in a bottom-six role in the NHL. Expecting one of the Canucks’ prospects like Kole Lind or Nils Höglander to step directly into a top-six role is asking a lot.

There is another option the Canucks could try in the top-six. He’s a Hobey Baker winner, who finished fourth on the Canucks in points-per-hour behind Toffoli, Elias Pettersson, and J.T. Miller. He’s got speed, a great shot, and flat-out loves scoring goals, but he’s probably one of the last players Canucks fans think of as a potential top-six forward.

Okay, anyone who read the headline of this article isn’t surprised right now, but perhaps there’s still a little residual puzzlement from seeing Gaudette in the headline in the first place. After all, Gaudette is being groomed as the Canucks’s third-line centre, giving the Canucks a one-two-three punch down the middle with Pettersson and Bo Horvat.

But there are a few reasons to think that Gaudette might be the Canucks’ best bet as their second top-six right wing behind Brock Boeser.

The case for Gaudette as a winger

One is that we see centres shift to the wing all the time in the NHL. Players drafted as centres frequently end up playing on the wing at the NHL level, either because their style of game fits better on the wing, they lack the two-way game required of a centre, or because their team simply has too many centres.

It’s one of the reasons why teams shouldn’t hesitate to stock up on centres at the draft. While not every centre can shift to the wing, as they are different positions that require different skillsets, it’s a lot easier to move a centre to the wing than a winger to centre.

In other words, it’s pretty reasonable to suggest that Gaudette, a natural centre, be moved to the wing.

But a more important reason why it would make sense is that Gaudette hasn’t exactly been great at centre.

While Gaudette was able to put up 33 points last season in limited minutes, the bulk of that scoring came on the power play. He was excellent on the second power play unit and was one of the primary drivers of that unit’s success.

At even-strength, with all of the added responsibilities of a centre, Gaudette struggled. Only Jay Beagle and Tyler Motte were on the ice for a higher rate of shots against at 5-on-5, and they were deployed primarily in the defensive zone. 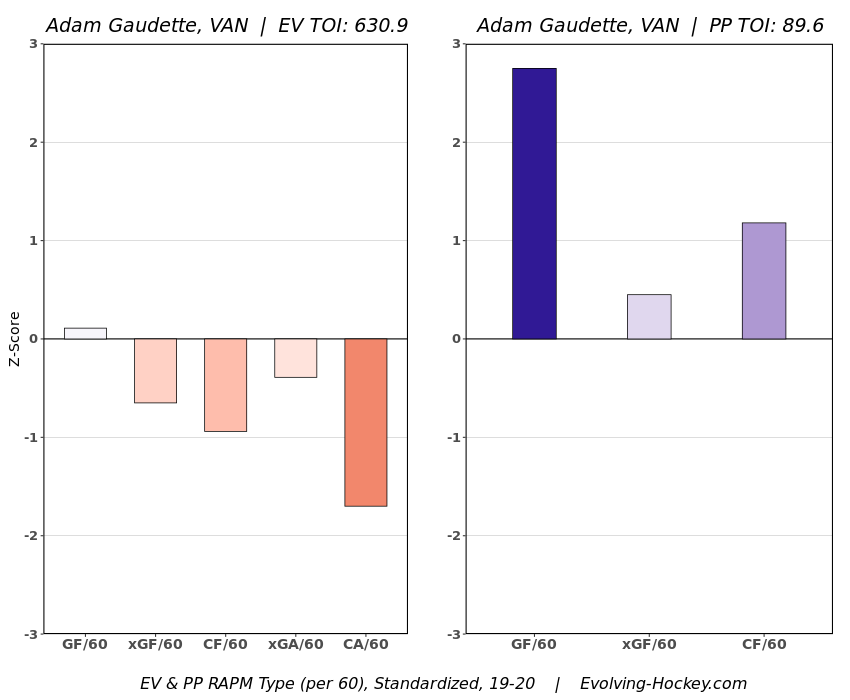 Gaudette’s impact on the power play is well above average, but the same can’t be said for his play at even-strength, particularly defensively. That’s in spite of being significantly sheltered: no Canucks centre played less against top lines than Gaudette and no Canuck was on the ice for fewer defensive zone faceoffs.

There’s also the issue that he was clearly the Canucks’ worst centre at faceoffs. He won just 41.2% of his draws, which limited his coach’s ability to start him in the defensive zone.

Gaudette is certainly aware of the need to improve his defensive game and he’s primarily working on his strength and explosiveness to ensure he isn’t chasing the play as much next season.

There’s one other reason why playing Gaudette on the wing in the top-six might be the right move: it worked really well last season.

Early last season, Gaudette spent some amount of time on right wing, with either Brandon Sutter, Jay Beagle, or Bo Horvat at centre. It didn’t last, mainly because injuries to Sutter and Beagle necessitated a return to centre, but it was working.

“There’s not as much thinking in the D-zone as with a centre,” said Gaudette at the time. “And it’s always easier going back and playing centre, so getting used to the wing is something I’ll always have in the future, which is good. It will make me a little more diverse.”

“I like that he’s learning to play the right and I’m even thinking now that he could even play the left,” said Green. “When you’re a centre and you get comfortable being on the wall, you can all of a sudden play left or right, and he can do that… It will give us a lot of nice options because he has a lot of energy and I still think the offensive side of his game is coming.”

Gaudette’s high energy game feels like a fit for the wing, as long as he can improve his strength for battles along the boards. He’s got the speed to burn through the neutral zone and get in on the forecheck as well as the finish and playmaking to know what to do with the puck in the offensive zone.

Of all the options to play on Horvat’s wing, Gaudette might be the best option.

When you look at all the trios that played at least 30 minutes together last season, the line of Tanner Pearson, Horvat, and Gaudette jumps off the page: they had the best expected goals percentage of any Canucks line according to Evolving-Hockey. In other words, they out-shot and out-chanced their opposition more than any other Canucks line.

That comes with a major caveat: they only played a little over 31 minutes together, mostly across four games in early November. That’s far too small a sample size to draw any definitive conclusions, but the results were good enough that they deserve a longer look.

Here are all the forward lines featuring Horvat that played at least 30 minutes together and their expected goals percentage. In general, Horvat needed Pearson on his left wing and did well with any of Loui Eriksson, Leivo or Miller on the right. But he absolutely thrived with Gaudette on the right wing. 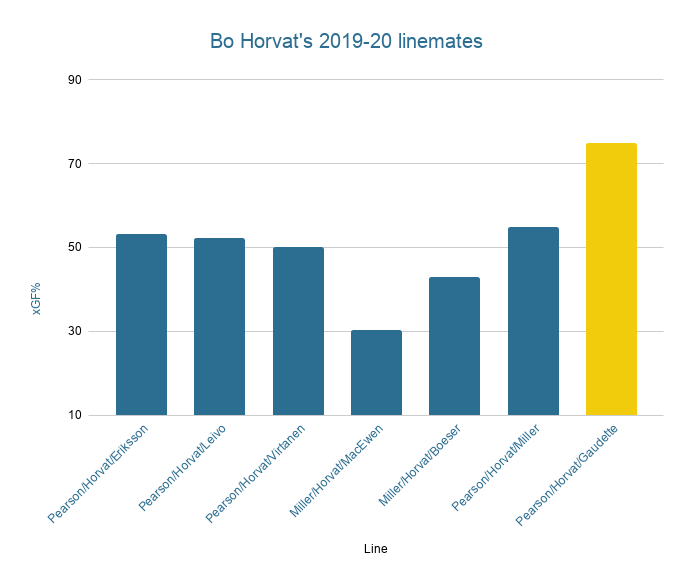 There’s really just one issue: the Canucks don’t have a lot of depth at centre.

The Canucks do have Marc Michaelis in the AHL, a Hobey Baker-nominated centre with a well-rounded game that should be able to play NHL games next season. He better be: he’s already 25.

After Michaelis, however, the Canucks don’t really have any other centres. That, more than anything else, might prevent the Canucks from experimenting with Gaudette on the wing, even if that’s where he might have the most impact.

Would it be nice for Gaudette to turn into a strong third-line centre? Of course, but what if he could instead become a goal-scoring top-six winger? He's thrived in the positionless role on the power play, shown he's a fit with Horvat in a small sample size, and has the speed and shot to fit into a role on the wing. At the very least, it's worth trying.

I Watched These Games: Canucks lose twice to the Flames to open the preseason
Sep 25, 2022 10:56 PM
Comments