The Department of Player Safety is an embarrassment to the NHL and a danger to the players.
May 4, 2021 12:23 PM By: Daniel Wagner 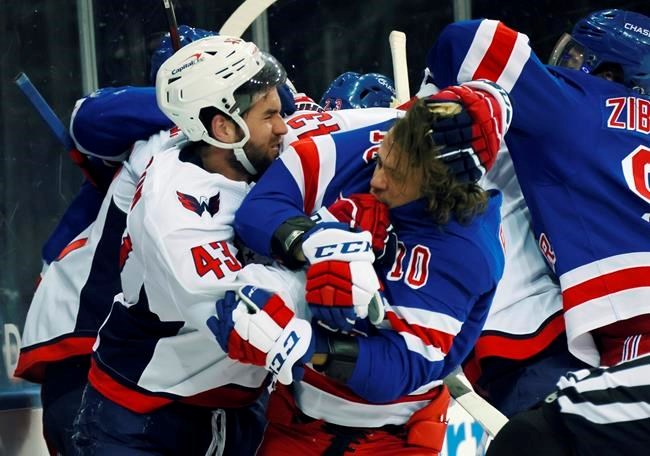 When the Washington Capitals faced the New York Rangers on Monday night in New York, Wilson incited a line brawl when he punched Rangers winger Pavel Buchnevich while he was prone, facedown on the ice. The Rangers were understandably incensed and went after Wilson after the whistle.

In the ensuing melee, Wilson punched Ryan Strome while the Rangers player was being held down on the ice by Nic Dowd. Artemiy Panarin came in to pull Wilson off of Strome and the two began grappling.

While wrestling, Wilson pulled off Panarin’s helmet, then threw the smaller winger dangerously to the ice, punched him in the face with his gloves on, then picked him up and attempted to slam his head into the ice again.

Panarin left the game with a reported lower-body injury. According to Sportsnet’s Elliotte Friedman, Panarin is potentially done for the season. The Rangers had just three games left in their season and have been eliminated from the playoffs.

“I figured you should have some more respect for the game and for the players,” said Rangers forward Mika Zibanejad. "I don't honestly know where to start. It’s just horrible. There's zero respect. I don't know why I'm surprised. It’s just horrible."

“We all saw it. There are lines that can't be crossed in this game and it's just zero respect to the game in general,” he said. “You have one of the star players in this league now, who could have got seriously hurt in that incident. You saw what happened. And you know, it happens time and time again with him. It's just totally unnecessary.”

It wasn't just unnecessary; it was also extremely dangerous. Panarin suffered a lower-body injury but could have instead suffered a serious head injury. The slow-motion replay shows that Wilson grabbed Panarin by the hair before throwing him down over top of his leg, causing Panarin’s head to bounce off the ice.

If Panarin didn’t twist as he was thrown down and hit the ice shoulder first, he could have been seriously injured. There’s a reason why the NHL has penalties for removing helmets during fights and introduced a rule that a player who loses his helmet during play must immediately leave the ice. Hitting your head on the ice without a helmet can be literally deadly.

A joke of a fine

As a result of his violent actions, Wilson had a hearing with the NHL’s Department of Player Safety. Wilson is a repeat offender, with three fines and five suspensions in his eight-year career. His longest suspension was 20 games in 2018 for an illegal check to the head of St. Louis Blues forward Oskar Sundqvist, though that was reduced to 14 games after an appeal.

So, the opportunity was there for the Department of Player Safety to throw the book at Wilson and show that the way he crossed the line and caused an injury is clearly unacceptable.

Instead, they fined Wilson $5000 for the punch to Buchnevich and sent him on his way.

Not only did the Department of Player Safety not suspend Wilson, they tacitly condoned his actions. That’s dangerous for every player in the NHL.

Former NHL enforcer — and All-Star Game MVP — John Scott illuminated exactly why the lack of suspension is so dangerous in a video posted to his Twitter account.

“What this means, though, is it’s fair game, baby, in any scrum,” said Scott. “If you go into a scrum anywhere on the ice and you see a star player, I’m throwing sucker punches, I’m grabbing this guy and twisting ankles, I’m doing whatever I can because the worst thing that’s going to happen to me is a $5000 fine. Because I can’t see anyone doing anything worse than what Tom Wilson did to Panarin.”

It’s at this point that it’s good to remember that George Parros, the current head of the Department of Player Safety, founded a clothing line called “Violent Gentlemen” that sold clothing with the slogan, “Make hockey violent again,” including Donald Trump-style red hats.

In other words, Parros literally profited off of making hockey more violent, then was put in charge of policing violence in the NHL.

This is the same Department of Player Safety that had their director of player safety, Ray Whitney, proudly state that he puts the onus on the victims of dirty hits rather than the perpetrators.

“A lot of times, and more often than not, I put the onus on the guys getting contact and getting hit,” said Whitney. “I really take pride in putting the onus on skill players to be able to take contact and be prepared for contact, to expect to be hit.”

The dangers of vigilante justice

To add even more risk to the situation with Wilson, the Capitals will face the Rangers again on Wednesday night. With no suspension, Wilson will undoubtedly be in the lineup for the Capitals.

What will happen? Will a Ranger challenge Wilson to a fight? Maybe. But what if the Capitals don’t see that as sufficient for injuring their franchise forward?

When the Department of Player Safety doesn’t act in the interests of player safety, the players are going to feel they have to take matters into their own hands.

Canucks fans know all too well what can happen when players enact vigilante justice. March 8, 2004 looms large in the minds of Canucks fans, when Todd Bertuzzi sucker punched Steve Moore from behind and drove him to the ice, leading to three fractured neck vertebrae, a concussion, and the end of Moore’s career.

Abolish the Department of Player Safety

At what point do we admit that the Department of Player Safety is a worthless institution? When Brendan Shanahan created the department in 2011, it was with the best of intentions. The department was aggressive in its initial rulings, with significant suspensions for hits that could potentially cause head injuries.

Shanahan was immediately undercut by a group of general managers who were unhappy with the longer suspensions and, perhaps coincidentally, the suspensions grew shorter and seemingly more arbitrary. Since Shanahan left the NHL front office, it’s only gotten worse.

In that case, there’s no reforming the Department of Player Safety. Changing out Parros and Whitney for other people won’t change anything if they receive the same marching orders from their superiors. It needs to be disbanded and rebuilt from the ground up, preferably as an independent institution that isn’t beholden to NHL leadership. Instead, independent arbitrators and consultants can make decisions on fines and suspensions. If general managers don't like it, too bad.

NHL players deserve better. They deserve a Department of Player Safety that actually gives a damn about their safety.